AUGUSTA, Ga. – The scene on the first tee Saturday morning at Augusta National was reminiscent of a Masters Thursday. Patrons packed around the ropes, 10-deep in some places. Those who didn’t get there early lined up down the fairway, leaning over the ropes to get a view. Green jackets, including those of Augusta National chairman Fred Ridley, past chairman Billy Payne and even two-time Masters champion Bubba Watson, were plentiful on the tee box.

The only difference? Everyone wasn’t there to watch Jack Nicklaus and Gary Player hit the honorary tee balls. Instead, it was a foursome of LPGA legends – Se Ri Pak, Lorena Ochoa, Nancy Lopez and Annika Sorenstam, a group that has 20 majors combined – kicking off the final-round festivities at the inaugural Augusta National Women’s Amateur.

“Their careers have inspired millions around the world,” Ridley said to the crowd. “Our admiration for these women is founded not only in the dozens of tournaments they have won but in the strength of their character and all that they have done to give back to the game of golf.”

Said Lopez: “I felt like I stopped breathing when I got on the first tee.”

After four well-struck tee balls, it was Virginia golfer Anna Redding’s turn to officially begin the highly anticipated and historic round. As Redding waited until the clock struck 8 a.m., the four Hall of Famers took a seat on a nearby bench, ready to take in the remainder of the emotional moment.

“It gave me a tear,” said Sorenstam, one of women’s golf’s biggest ambassadors. Fifty-nine of the 72 participants this week – and 24 of the 30 final-round competitors – played in either Sorenstam’s junior or college event (or both).

“It was very cool to see all the pieces come together. … Today is a little wave of something big, not just in women’s golf but for all women.” 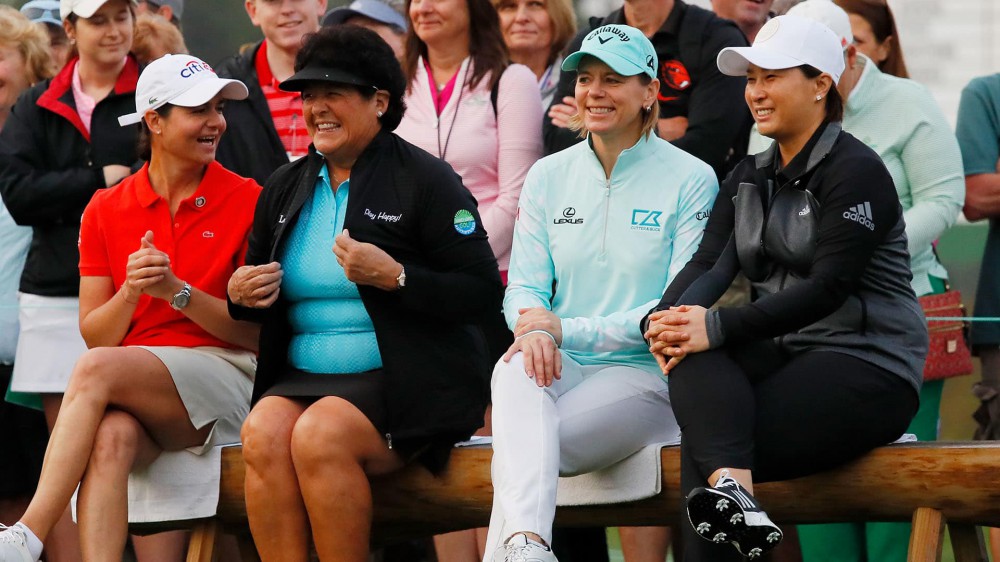 DJ shoots 64, while his father bowls a perfect game