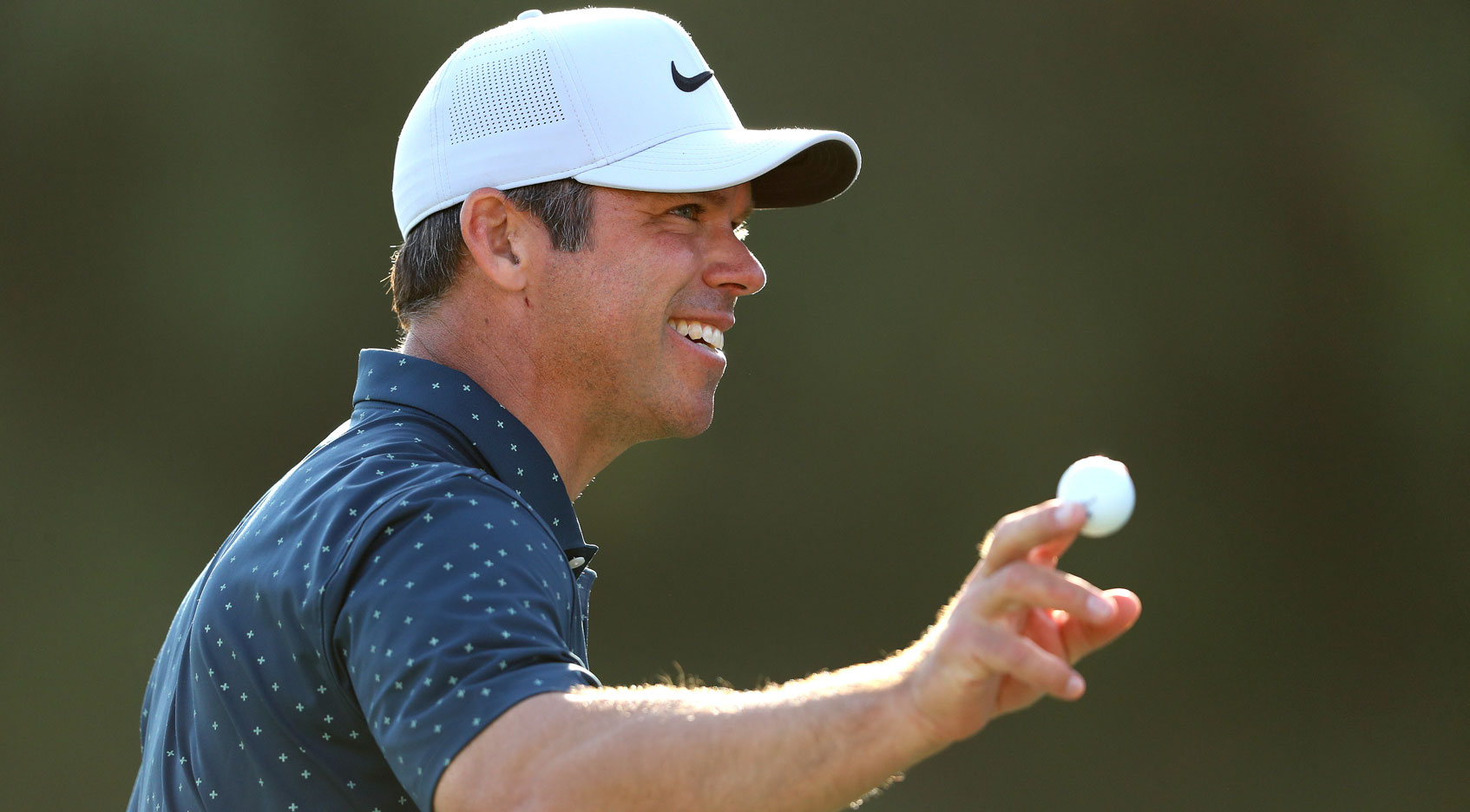 Because it seems obvious, at least to me, I never make comparisons between professional golfers and weekend hackers or even single-digit handicaps. You might be a good stick, and I understand the attraction of giving it a go on any PGA TOUR course in tournament conditions – I’d love to take BP at Wrigley with the flags whipping toward the direction of Kenmore – but those who play at a level high enough to make it a profession are built differently, both for the short- and long-term.

This is to say that while it’s probably on your bucket list to play Pebble Beach (in any conditions) if you already haven’t, touring professionals come at it from a much different perspective. It’s their job, so the correlation is within that headspace. Given the plethora of early withdrawals from the AT&T Pebble Beach Pro-Am, a review of the phenomenon is timely.

One of the influences to go to work is the weather. For those who elect not to play, this week’s forecast cannot be ruled out as a deterrent. It’s going to be chilly (mid-50s throughout) and it’ll feel colder with steady winds off the ocean that will intensify by the final round. Rain also is all but certain to fall on everyone at some point.

But even if conditions were perfect, a potentially more influential wrinkle triggered by the pandemic may be behind at least a couple of the decisions.

Last week’s Waste Management Phoenix Open was the finish line to qualify for The Genesis Invitational via the special FedExCup points list that was extended from the beginning of the 2019-20 PGA TOUR season. Typically, the season-ending top 125 automatically qualify for select invitationals, Genesis included. However, because of the loss of three months of competition, membership agreed to modify the qualifying process.

In a sport with constant adjusting to personal scheduling, K.H. Lee is a perfect example. His share of second place at TPC Scottsdale launched him into 85th position in the ranking. Come Monday, he withdrew from Pebble Beach. But now, we should expect to see him at Riviera next week.

In Notable WDs below, I cite finishing placement in the special points list. All referenced inside the top 125 were virtual locks to retain position, but it’s always easier to withdraw from the next tournament after confirmation of qualification.

Granted, there were quite a few early WDs this week, and not all were due to this reasonable explanation, but it has happened before and it probably will happen again to some degree. The other two invitationals that will be using a special FedExCup points list are THE PLAYERS Championship (top 125 through the World Golf Championships at the Concession/Puerto Rico Open) and the RBC Heritage (top 125 through the Valero Texas Open).

As it concerns PGA TOUR Fantasy Golf for the AT&T Pebble Beach Pro-Am, it’s the last multiple-course tournament of the season, so shot-level data will not be used for golfers on either course because Spyglass Hill isn’t lasered by ShotLink. Therefore, only actual scoring and bonus points will be contributing to fantasy scoring.

My roster for the AT&T Pebble Beach Pro-Am (in alphabetical order):

Scott Piercy … After an enthusiastic opening to the season during which he went 6-for-6 with three top 20s to enter the holiday break, he returned in January and promptly missed the cuts at Waialae and at PGA WEST. The 42-year-old then withdrew early from the last two tournaments. While curious, it’s possible that he was waiting out the deadline to qualify for The Genesis Invitational, which he did at 116th on the special points list. So, expect him to embark on at least a fortnight of action beginning at Pebble Beach where he’s 4-for-4 since 2017 with top 20s in the last three years.

Nick Taylor … Prevailed at Pebble Beach last year and just four months after his first child, Charlie, was born. I wrote about the potential impact of the life experience in a Father’s Day special. Concerning the new daddy’s prospects as he defends his second PGA TOUR title, that he’s reconnected with some form since the holiday break is encouraging. He also already had registered a T10 among three cuts made in this tournament prior to the phenomenal performance a year ago. The clincher is that the weather may make the Canadian actually feel like he’s on vacation in February!

Alex Noren … Hasn’t let up since returning to the FedExCup Playoffs last season, but he’s still a bit of a tease on the weekly. Three top 20s this season but just 99th in FedExCup points. If you took a moment to review his statistics, you’d pass and move on, but he makes most cuts, he’s a seasoned, 38-year-old veteran and his talent plays strongly enough to consider in all formats. Also finished T32 in his tournament debut a year ago.

Cameron Davis … From Jason Day to Matt Jones to Aaron Baddeley, Aussies have made a lot of noise at Pebble Beach over the years. Davis is building a career and a track record worthy of joining the club. His results on the course have improved gradually to a T38 in his third appearance last year, and he’s currently 46th in the FedExCup thanks to seven paydays in eight starts. He can ease off the throttle on the tee and focus on his blend of hitting greens and converting par breakers.

Si Woo Kim … I was a believer at Torrey Pines immediately coming off the victory at PGA WEST, but after missing that cut and finishing a pedestrian T50 at TPC Scottsdale, he presents as a classic recent winner who’s experiencing a relative letdown. Finished T4 in this tournament at Pebble Beach in 2019, but it’s his only impressive showing in five tries.

Rickie Fowler … Slotted as a quintessential Wild Card last week and missed the cut. TPC Scottsdale was the best place for a snapshot of his progress, especially since the crowd made noise and generated a connection that he covets. He finished T43 at the 2019 U.S. Open at Pebble Beach, but this is his first appearance in the non-major held here since 2012.

Brandt Snedeker … Suffice it to say that he’s had ample opportunities to flash his old self this season but it’s been a challenge. Now, three of his four rounds at Torrey Pines provided some evidence, but a third-round 77 on the South Course also was the latest example of how much oil he’s been leaking. Twice a winner at Pebble Beach (2013, 2015) and loves himself the Poa greens, but he also missed the cut in the last two editions.

Brian Harman … He’s been a contributor and regularly endorsed on this page for a while, but I’d prefer him on a surface other than Poa. It’s also his first tournament appearance in seven years.

Ryan Moore … If you subscribe to the notion that the conditions prevent everyone from firing on all cylinders, then there’s reason to be hopeful that he turns a corner after resuming competition 0-for-3. However, it’s his first visit since 2016 and he’s unlikely to find his game with the challenge the elements are promising.

D.J. Trahan … Back since testing positive for COVID-19 before The American Express on Jan. 19. Since opening the season going 4-for-4, he’s missed his last three cuts. He’s played at the AT&T Pebble Beach Pro-Am a dozen times and finished T18 just two years ago. Bona fide flier.

Fabián Gómez … Withdrew during his second round of the Farmers while on the South Course at Torrey Pines. An explanation wasn’t released. (Had opened with 71 on the North.) He’s cashed only twice this season hasn’t recorded a top 55 among three cuts made in seven trips to Pebble Beach.

Dustin Johnson … Prevailed in Saudi Arabia and opted out of the AT&T Pebble Beach Pro-Am on Monday night. In a statement on Tuesday, his agent, David Winkle, said that DJ is plans to return to competition at The Genesis Invitational next week.

Sebastián Muñoz … Rough week at TPC Scottsdale where he missed the cut by 12 and tied for last. Finished 23rd in the special points list for eligibility for next week’s Genesis but his performance in the desert likely will be reason enough for him to go it alone in fantasy pursuits at Riviera.

Wyndham Clark … Sitting pretty at 33rd in the FedExCup and easily qualified for The Genesis Invitational at 74th in that special points list. The Oregon Duck would have been an intriguing possibility in weather befitting a duck. He also placed T18 here last year.

K.H. Lee … As referenced at the top, he climbed into the field at The Genesis Invitational with his two-way T2 at the Waste Management Phoenix Open. The only other golfer to play his way inside the top 125 of the special points list at TPC Scottsdale was Jordan Spieth (115th), but he already was exempt at Riviera by virtue of his victory at the 2017 Open Championship. As of Tuesday afternoon, Spieth remains in the field at Pebble Beach.

Aaron Wise … Like Clark, you’d figure a product of the University of Oregon would thrive in less-than-ideal conditions, and he’s 2-for-2 at Pebble Beach with a T15 in 2018. Instead, he’s alternating another week of competition (66th, WMPO) with a week off, just as he did prior to the trip to Arizona. He’ll get back at it next week, presumably, as he finished 96th in the special points list to qualify for The Genesis Invitational.

Matt Kuchar … The 42-year-old has yet to connect for a top 30 this season but he projects to have a better time of it at Riviera where he’s 13-for-14 with a co-runner-up last year than at Pebble Beach where his results have been mixed. His ball flight would have made sense this week, but it’ll make sense next week, too, obviously. Already eligible for Genesis as a member of the 2019 Presidents Cup team but he also finished 97th on the special points list.

Luke List … He pegged it in each of the last four weeks and finished 114th in the special points list, so he’ll enjoy a break before returning to Riviera for his sixth consecutive appearance.

Kevin Tway … Straight strugglin’. Just 2-for-11 this season and 192nd in the 2020-21 FedExCup. Didn’t come anywhere near qualifying for next week’s stop at Riviera.

Padraig Harrington … Tested positive for COVID-19. So, he’ll still have eight starts on his Minor Medical Extension to earn 264.382 FedExCup points and a promotion to the Major Medical category.