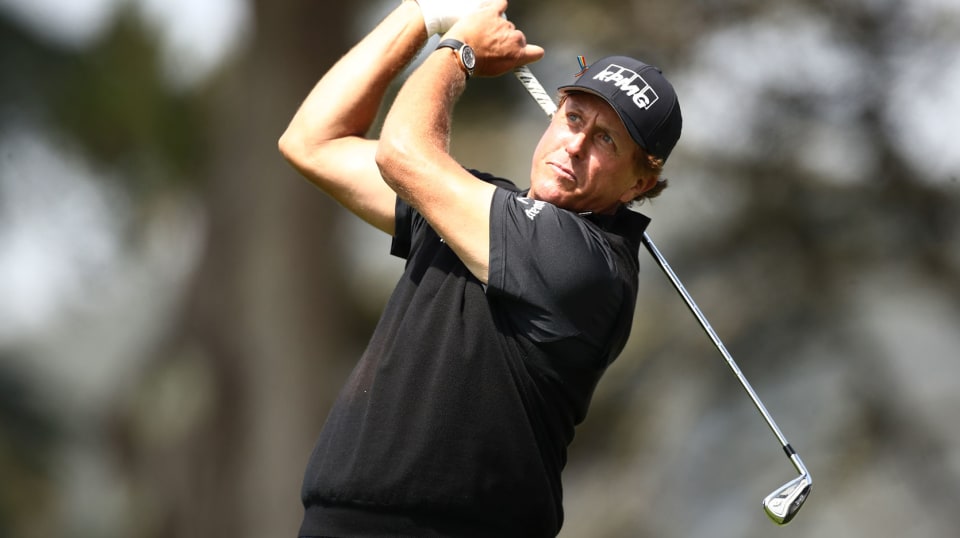 My roster for the Safeway Open (in alphabetical order):

Emiliano Grillo … Broke through at Silverado in what his first start as a PGA TOUR member in October of 2015. He’s retained membership comfortably since but it’s remained his only victory in 121 starts with a card. Hey, it’s hard to win, and he’s still explosive at times, so expectations are elevated where he’s experienced his greatest success on the circuit. It helps that he went T3-T9 through Minnesota and Lake Tahoe just over a month ago.

Sergio Garcia … Making his tournament debut. He receives this endorsement because he makes most cuts and his ball-striking remains world-class, but a T5 at Harbour Town in June is the only top 30 in his last nine starts and he didn’t qualify for the Playoffs. Even if he seems overvalued in DFS, figure out a way to make room since there isn’t a prohibitive favorite in the field of 156.

Erik van Rooyen … His class isn’t permanent yet, but you’re definitely of the sense that it will be. He’s still a shiny, new toy but the luster will dull now that he’s a TOUR member and eligible for the Playoffs. He’s evolving from a nothing-to-lose prospect to a guy for whom expectations are higher and there’s something at stake, so failure will be felt this time. Just give him time to learn the courses. He’s been a quick study, so there’s no reason to believe that it won’t continue in his debut at Silverado.

Nick Watney … The NorCal native always deserves a look when he returns to the area. Placed T10 here last year, which doesn’t hurt. Also rebounded as the first positive COVID-19 test with a T12 at the 3M Open in late July.

Patrick Rodgers … The Stanford product just missed on crashing the Power Rankings. He’s 4-for-6 at Silverado with a T6 in 2015 and a T25 in 2018. And as one of the busiest since play resumed, he connected on seven paydays, three of which for a top 20.

Henrik Norlander … It feels like I’ve endorsed him more than I probably have, but he looks so good on paper all the time that he deserves the hype. That said, for as much as I love his firepower and confidence, results remain spotty. Yet, that could mean that he’s buffing the edges in advance of a breakthrough. Among the best on TOUR tee to green and getting his third look at Silverado.

Jordan Spieth … If I’m going to lose a debate to abstain, it’ll be in the context of a fresh start. It’s what the Safeway Open presents. However, once he tees off and reenters the focus of getting the ball into every hole, the influence of space and time lessens. Now 27 years of age and three seasons removed from his last appearance in the TOUR Championship, he knows how much grit he has. It should be limitless but scar tissue is as well. It’s fascinating for all the wrong reasons, but I’ll never talk you out of stashing him away in speculative situations. There have been more than enough flashes to believe in something special occurring again.

Kevin Tway … If he didn’t break through at Silverado two years ago, you’d wonder why he earned the attention in this preview. The 32-year-old endured a miserable 2019-20 that opened with a missed cut in his title defense, which isn’t surprising for a first-timer, but he failed to record a top 25 among just seven paydays in 19 starts.

Denny McCarthy … Love the player, and he’s fresh off his second consecutive season at No. 1 on TOUR in Strokes Gained: Putting, but he could get bypassed by better ball-strikers at Silverado. That he’s 0-for-2 here is fact over friction, but a T9 at the Wyndham Championship is his only top 30 in 16 starts in 2020. For the time being, limit weekly usage to shootouts.

Xinjun Zhang … Slumps in similarly in advance of last year’s T7 at Silverado where his tee-to-green was on point and he co-led the field in par-5 scoring. Connected top 15s this summer, but they’re his only notable results dating back to March. So, depending on perspective, which fantasy is 100 percent of the time, he’s either a trap or he’s worth fractional ownership. If you play him, do so aggressively with others. Force the issue.

Will Gordon … This is relative only as a word of caution to slow-play him now that he’s a fully exempt PGA TOUR member. I see what you see, of course, and that includes a rock-solid game from tee to green, which is the prerequisite at Silverado, but he’s complementary value for the time being.

J.B. Holmes … Hasn’t played since the Workday Charity Open on Thursday, July 9. The next day, he withdrew with a sore shoulder. He also withdrew early from the PGA Championship and the Wyndham Championship. For that reason, obviously, tiptoe into usage on the weekly. Not that he’s attractive in more than fractional plays in DFS, but we need to see how the shoulder responds. He’s not getting any younger at 38 years of age.

Pat Perez … Hoping to get back on the board after consecutive mid-tournament WDs from the Wyndham Championship and THE NORTHERN TRUST, and both during the second round. An angry right ankle is to blame. Not that course-history buffs would be on board, anyway. He’s 0-for-3 at Silverado. Still, we’re approaching that time of year during which he’s thrived in the second half of his career, so monitor him closely.

Cameron Percy … Seeing that Silverado is the site of his last top 10 on the PGA TOUR (T7, 2019), it’s an important time to log confidence. However, like Perez, the Aussie also withdrew from two events during the second round this summer, just not in back-to-back weeks. Percy cited a rib injury for his early exits from the Workday Charity Open in July and in his last appearance at Sedgefield four weeks ago.

Chris Stroud … Withdrew from the Wyndham Championship before his second round with a sore back. He had pulled out of the 3M Open during the second round of that tournament, but an explanation wasn’t released. In between, he missed the cut at the Barracuda Championship.

Rafael Campos … Opens 2020-21 as the only rookie , but that’s because he was limited to nine starts last season due to an injured left elbow stemming from pain first felt 13 months ago. Until further notice, the 32-year-old demands attention in our world only at the Puerto Rico Open.

Matt Kuchar … Adds a second week off after finishing 62nd in the FedExCup. He’ll return at Winged Foot next week.

Danny Lee … Officially the last man in the 144-man U.S. Open field, so he’s opted for rest ahead of the first of six majors this season.

Vaughn Taylor … This is his fifth consecutive early WD since pulling out of the Barracuda Championship with a rib injury. This kind of sequence will happen to a golfer two or three times every season, so we just need to remain patient with the 44-year-old. He was enduring a rough return to action since the break, anyway, but he finished 85th in the FedExCup thanks to a strong first half.

Jimmy Walker … The struggles continue for the 41-year-old who has battled Lyme disease for some time now. After play resumed, his only cut made in six starts was a T62 at the Memorial. In his only prior trip to Silverado, he finished 63rd in the first edition in 2014.

Bronson Burgoon … Since The RSM Classic in late November, he’s just 4-for-13 with zero top 35s.