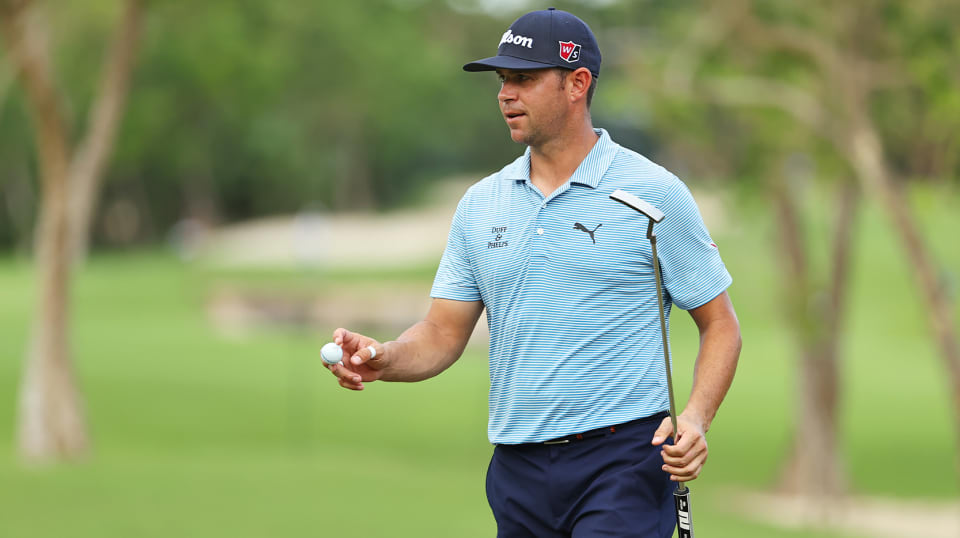 With only the Stadium Course and the Nicklaus Tournament Course at PGA WEST serving as the stages for The American Express this week, building a roster in PGA TOUR Fantasy Golf is easier.

In Expert Picks (linked below), I cited that my lineup was subject to change when tee times were released. In the high-stakes world of fantasy golf, every edge matters, and I’m planning on leaning on “Nick Tourney” for three starters in each of the first two rounds. (Only the Stadium Course will be used in the third and final rounds.)

Comparing each of the first three rounds in the last five editions of the tournament, Nick Tourney surrendered a lower scoring average that the Stadium Course in all 15 rounds. The narrowest margin between the two was 0.80 strokes in the second round of 2017. The widest split was 2.41 in the opening round in 2016. The average disparity was 1.45 strokes; the median is 1.34. The only trend is the consistency over time, so the fantasy strategy is straightforward.

Overall fantasy scoring will be down slightly because shot-level data will not be contributing. Only actual scores and bonus points will be measured. This always is the construct when multiple courses are used in a tournament. Whenever in doubt, refer to Appendix A in How to Play or Rules at FantasyGolf.PGATOUR.com.

On Friday, Jan. 15, it was announced that the World Golf Championships-Mexico Championship is relocating to The Concession Golf Club in Florida this season. The limited-field tournament is the penultimate stop in Segment 2 of PGA TOUR Fantasy Golf, so the impact of the move is relevant for course-history buffs who may now consider burning a start on a headliner at PGA WEST even though all gamers are guaranteed four rounds at the WGC.

Lastly, as you may have read in the Power Rankings and Sleepers in the last two days, and as you’ll also find below, the comments sections on this website will be eliminated on Tuesday, Jan. 26. Like all of you who have chimed in, I’m going to miss that space and our connection in it.

What I learned about you and your motivations in the seven years we engaged helped guide what we did with the fantasy content. It’s allowed for countless concepts to gain traction and the growth that we’ve enjoyed together. From my fingers punching the keys to your loyal viewpoint, I can’t thank you enough for taking the time to express your thoughts, opinions and feedback.

Until the next opportunity to correspond directly on this website is presented, please consider reaching out to me on Twitter, publicly and privately. For all matters concerning PGA TOUR Fantasy Golf, please continue to send emails to [email protected].

POWER RANKINGS WILD CARD
Chris Kirk … Compelling call here because his two-way T2 at Waialae was the next-best thing to winning, both literally and emotionally. Now set with fully exempt status for the remainder of the season, he cruises forward sans the tick-tock of the medical extension in his ear. So, the possibility of a letdown immediately following the stress is reasonable, but with how he’s reengineered his life as a whole, it’s an opportunity to further prove that his dedication to recovery is working overtime. His mixed results in tournament history is irrelevant, but his experience here isn’t. What’s more, he’s of the talent to double down on last week’s success. Join him.

Charles Howell III … As he has throughout his career at Waialae, he came through again with a T19 last week to make it 20-for-20 in the tournament. He’s “only” 12-for-15 in The American Express but it’s his time of year to plug and play.

Cameron Champ … With the way he was striking it late in 2020, I began to wonder if he’d be a fixture in the Power Rankings every time he played. He still could one day but that perspective doesn’t wash over me often. When it does, it’s usually associated with a talent in his third year on TOUR, which he is. His floor is so solid and above so many others that I’m endorsing him in every format this week, including as a tandem in a two-man One & Done. Placed T21 in his debut here last year.

Aaron Wise … The quiet runner-up to Viktor Hovland at Mayakoba already had a pair of top 20s on the board in 2020-21, so the foundation has been laid for a fruitful contract season. Currently 24th in FedExCup points and 16th in greens hit. Finished T17 at PGA WEST en route to Rookie of the Year honors in 2018.

Lucas Glover … Presents so comfortably as a stripe show from tee to green who just needs a few putts to drop to loiter on the leaderboard. Half of his dozen prior appearances resulted in a top 20 and he’s missed only two cuts.

Si Woo Kim … Returns to PGA WEST after a back injury forced him out after an opening 87 last year. He struggled until play resumed in the summer and has kept it in third gear since. Last week’s T25 at Waialae was his third top 25 among six cuts made this season. He finished T9 here in 2016 and T40 in 2019.

Maverick McNealy … Lined up as a Sleeper for this event last year and contributed a T37. This season, all four of his paydays in seven starts are top 25s. With his pedigree, the feel is real that his value will only continue to rise. Hop aboard sooner than later.

FADES
Phil Mickelson … Missed the cut in his debut as host of the tournament last year, just as he did in 2018 before sharing runner-up honors in 2019. He’s had his moments since turning 50 last June, but most were reserved for the PGA TOUR Champions where he prevailed in both starts.

Rickie Fowler … Still waiting for him to put four rounds together since investing in swing changes. He’s too good for it not to happen at some point, but gamers have no reason to extend themselves, especially with his price tag in DFS.

Francesco Molinari … This is his fifth appearance in the tournament but his first since moving to its host state of California. Went 1-for-3 in the fall with a T15 in Houston, but it’s fair to question how much rust has formed given he sat out seven months of 2020.

Gary Woodland … With a torn labrum in his hip and multiple cortisone shots to alleviate the pain in recent months, it’s a wonder that he’s still attempting to compete. He is not advised unless you have interest in his opponent in a head-to-head. This is his first appearance in the Coachella Valley in seven years.

Russell Henley … His surge after the three-month shutdown of 2020 was extended to a T11 at Waialae, but it’s time to give him a breather. After a pair of forgettable finishes in The American Express in 2013 and 2016, he’s gone 0-for-3. Respect the absence of tournament success.

Seung-Yul Noh … Since his last PGA TOUR appearance at the 3M Open last summer (where a shoulder injury forced him to withdraw during the second round), he recorded a pair of top 25s in as many starts on the KPGA. However, he hasn’t competed anywhere since, so expect inconsistency out of the gate. With 22 starts remaining on his Major Medical Extension, he remains an intriguing flier in deeper salary leaguers.

Joohyung (Tom) Kim … The 18-year-old phenom from South Korea captured our attention in the fall and I’m tracking him in Rookie Watch, but the transition to excellence from courses in Asia to PGA TOUR-caliber proving grounds is a biggie. Yet, DFSers almost are obligated to work him into at least one lineup to begin connecting with him emotionally. Rule No. 1: Have fun!

RETURNING TO COMPETITION
Ryan Moore … Hasn’t played since withdrawing during the second round of THE NORTHERN TRUST five months ago with an injured back. The Las Vegas resident had committed to the Shriners in October, a tournament that he won in 2012, but he withdrew before the tournament commenced. Now that he’s sat out more than four months, he’s eligible for a Major Medical Extension in 2021-22 if he needs it. He opened 2020 with a T6 at PGA WEST, so with another one this week, he’ll be on his way to keeping his card, anyway. Worthy of a spot in fractional DFS situations.

Graeme McDowell … Committed to the Abu Dhabi HSBC Championship. He last competed in December at the DP World Tour Championship where he withdrew after the second round with a back injury. His only top-30 finish anywhere since winning in Saudi Arabia almost a year ago was a T24 at the BMW PGA Championship in October.

Kiradech Aphibarnrat … Also slated to peg it in Abu Dhabi this week. He was last seen walking off El Camaleón during his second round at Mayakoba due to a sore ankle. The 31-year-old was among the handful of internationals who returned late to competition after the three-month shutdown. He already was scuffling entering the unplanned break, but he went just 3-for-8 worldwide with one top-35 finish (T11, Bermuda).

NOTABLE WDs
Jon Rahm … The 2018 champ is nursing a sore back.

Brendon Todd … It wasn’t all that long ago when he’d have done anything he could have to appear in a PGA TOUR event, but you can’t play them all and he’s regained the control of his schedule again. After opening 2021 with a T13 at Kapalua, he finished T41 at Waialae.

Sebastián Muñoz … Went T17-T65 on the Aloha Swing. He’s well-positioned to contribute in all formats all season, but he’s still learning how to build a sensible schedule in the long-term.

Branden Grace … His tournament debut will have to wait for another year. After missing the cut in Honolulu, he ranks 136th in the FedExCup with no better than a T29 (Safeway) among four cuts made in nine starts this season.

D.J. Trahan … The 2008 champ tested positive for COVID-19. Opened the season with four straight paydays but crawled into the holiday hiatus by going 0-for-3. Now 137th in the FedExCup.

K.J. Choi … After finishing 71st at the Sony Open in Hawaii, he’s opted to stay in the state to compete in the Mitsubishi Electric Championship at Hualalai. Remains fully exempt on the PGA TOUR via a career earnings exemption.