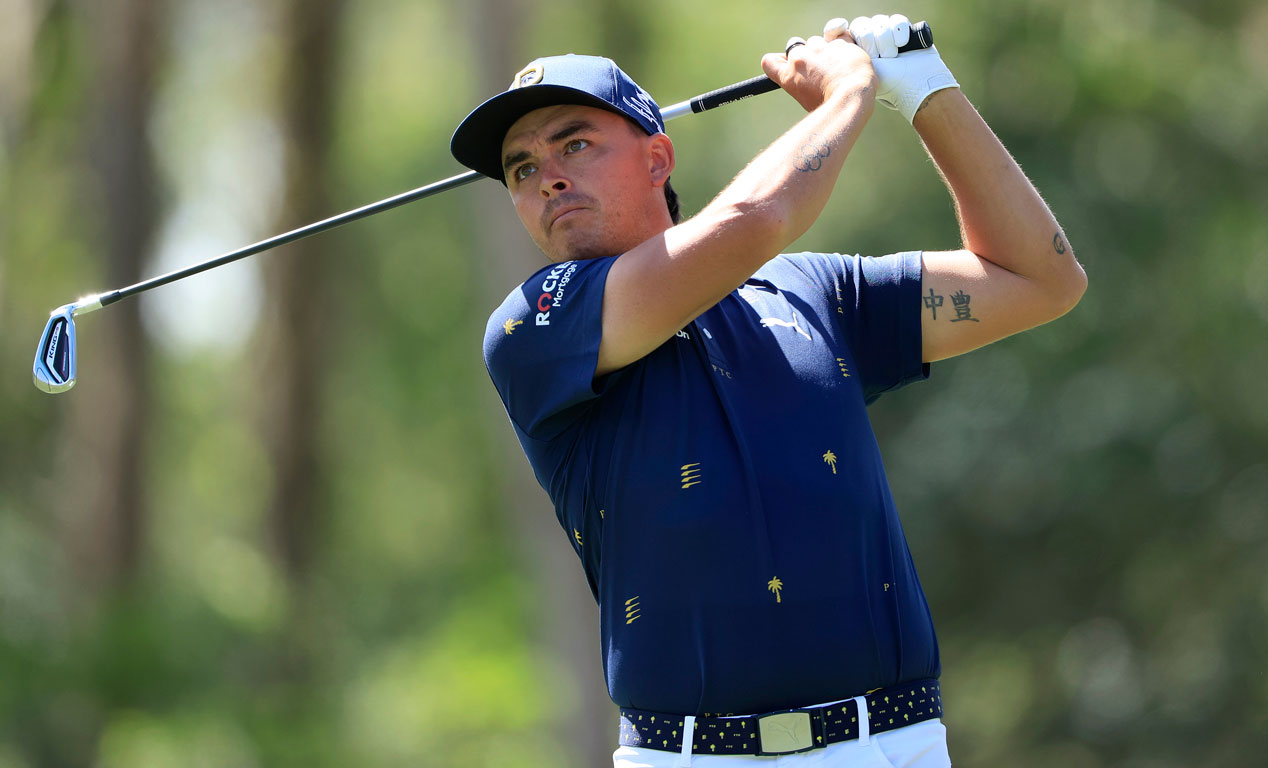 We found out what we’re made of at THE PLAYERS Championship. The carnage in PGA TOUR Fantasy Golf was real and it was spectacular. I don’t have any mass data to share but it’s evident based on your reaction and my personal experience.

I entered the tournament slotted 91st in Experts, got only three to the weekend, including eventual champion Justin Thomas, and climbed 40 spots. Normally, when I’m hanging up a goose egg for two rounds, I hope to fall no more than about 40 spots per round before bonus points are added and scoring is finalized on Monday.

And there are no excuses, really. THE PLAYERS was the second event of Segment 3, so every golfer was available to every gamer. It proved two things: 1) How challenging fantasy golf can be; 2) TPC Sawgrass remains undefeated.

In my second week as a contributor to one of GolfBet’s previews, I hit on a four-man parlay to make the cut at +458. Tips of the visor to Corey Conners (7th), Jason Kokrak (T9), Cameron Smith (T17) and Will Zalatoris (21st) for their cooperation. Hmm, perhaps I should have lined them up beside JT in PGA TOUR Fantasy Golf.

If you’ve ventured into the GolfBet space, look for me on the app made available by The Action Network. Only a fraction of the possible bets are available in the app, so treat each separately, but I’m planning to include all that are in my picks. I will tweet them as well, as I did for THE PLAYERS.

Looking ahead, the landing page for the Bracket Challenge for the World Golf Championships-Dell Technologies Match Play has been published. Soon after the bracket for the tournament is determined at 10:00 a.m. CT on Monday, March 22, you’ll be able to complete your own. If you’re already registered for PGA TOUR Fantasy Golf, you do not need to register for the Bracket Challenge.

The Bracket Challenge is free to play and it has stand-alone staging and prizing. It is not included in PGA TOUR Fantasy Golf, so your starts in the roster game will not be impacted by your picks to win in the bracket. Only the Corales Puntacana Resort & Club Championship will contribute. Again. The first edition of the tournament in the Dominican Republic this season was the third event of Segment 1.

Next week’s Fantasy Insider will focus on the Corales event but I’ll have more on the Bracket Challenge since the game will have been live for at least 24 hours by then.

My roster for The Honda Classic (in alphabetical order):

Rickie Fowler (+4000) … Who else, right? With a win in 2017 and a T2 in 2019 among five top 15s, he’s the all-time earnings leader at PGA National, but he still hasn’t presented enough evidence to even hold our breath for a turnaround. Even when we were hopeful that it’d occur at TPC Scottsdale, he missed that cut. Abstain.

Zach Johnson (+8000) … The 45-year-old is back to his reliable ways. Currently T2 on TOUR with 13 consecutive cuts made, although none of the last five were top 40s. At T33 in greens hit and 11th Strokes Gained: Putting, he’s been a welcome rebounder this season. He’s also cashed in his last three trips to PGA National.

Stewart Cink (+15000) … His track record at PGA National reminds veteran gamers why we used to love him as much as we did. He’s 10-for-10 on the track. Currently third on TOUR in greens hit and second in par-3 scoring, so he’s advisable as a complement in DFS and as a safety net in PGA TOUR Fantasy Golf.

Ian Poulter (+6600) … Because we count on him to grind out a payday so often, he’s insurance at a good price in every format. Additional peace of mind is that he’s 6-for-7 at PGA National.

James Hahn (+8000) … Hasn’t seen PGA National in seven years. That’s probably a good thing since he’s a career 0-for-2 on the property. Since opening this season with a trio of top 10s, he’s added a pair of top 15s and sits 54th in the FedExCup. Overall, he’s fifth in total driving, 15th in GIR and T3 in par-4 scoring.

Byeong Hun An (+6600) … Pushing the chips into the course history. It’s impressive what with a pair of top fives contributing to a 3-for-3 slate since 2018. Seven of his 12 rounds have beaten par.

Henrik Norlander (+10000) … Flier as a course fit. Ranks ninth on TOUR in total driving and 14th in greens in regulation. He’s also lurked enough on tough tracks to warrant the hope.

Mackenzie Hughes (+6600) … There’s so much to like in the long-term, but I want to see him a little more at PGA National before lifting the governor. He made the cut on the number last year, and then posted a pair of 4-under 66s on the weekend to finish alone in second place. The other component is his skill set. As no better than average tee to green, he’s poised to be punished, not unlike his first three visits (2017-2019).

Henrik Stenson (+20000) … It’s been seven years since he last pegged it in competition at PGA National and nine years since he last made a cut (T21, 2012), so even if he entered with some form, we might be hesitant to invest. But he’s not in form, so there’s no question what not to do. The 44-year-old Swede has missed four straight cuts worldwide and he failed to cash in 10 of 15 starts since the shutdown ended in 2020.

Martin Kaymer (+6600) … Like with Lee Westwood, you may not be aware that the German also is a PGA TOUR member this season. Unlike Westwood, Kaymer hasn’t made any noise. In his only start, he missed the cut at the U.S. Open. His last payday on the TOUR was a T31 at the Barracuda Championship in 2019 when he finished 150th in the FedExCup. That position granted him conditional status in 2019-20 and again in 2020-21 because of the eligibility adjustments due to the pandemic. He’s exempt into the PGA Championship and the U.S. Open in the coming months, so consider a spot start in either or both if he’s in a groove.

Will Gordon (+10000) and Erik van Rooyen (+10000) … We’re still two completed tournaments from the midpoint of the 2020-21 season, but it’s still a fair time to take the pulse of the only two with status via the non-member top 125 category. Gordon is 142nd in the FedExCup with only one top 25 (T21, Pebble Beach). He’s a better fit in his debut at PGA National, collectively as it concerns his iron play, putting and recent form, but the sheer silence over time has exposed how unintentionally dangerous it can be to have success so quickly. Meanwhile, van Rooyen is 146th in the FedExCup with two top 25s. Both were in the fall and he’s just 3-for-7 with one top-55 finish on the PGA TOUR since. This is his second start at PGA National (MC, 2020), but there’s even less about which to get inspired. Both first-timers get no better than a midseason grade of “C,” but I know gamers who already have swiped left on either.

Brian Harman … Snuck inside the top 64 of the Official World Golf Ranking to qualify for next week’s World Golf Championships-Dell Technologies Match Play, so he’ll break after rising for a T3 at THE PLAYERS Championship.

Scott Piercy and Gary Woodland … Both withdrew on Monday due to positive COVID-19 tests.

Danny Willett … Second consecutive early withdrawal. Had to exit from THE PLAYERS on Tuesday, March 9, when he tested positive for COVID-19.

Sam Burns … For all intents and purposes, he first captured our attention in the final round of The Honda Classic in 2018 when he outscored his playing partner, Tiger Woods (70), with a bogey-free 68 to finish T8. Burns failed to crack the top 60 in the last two editions and he’s continued to tease gamers this season despite comfortably positioned at 44th in the FedExCup.

Kyle Stanley … After a rough couple of weeks in Florida, a break isn’t the worst thing right now. Plus, he missed the cut in his last three starts at PGA National and hasn’t broken par in 13 consecutive competitive rounds on the course, so it was unlikely to serve as a turnaround. Currently 93th in the FedExCup.