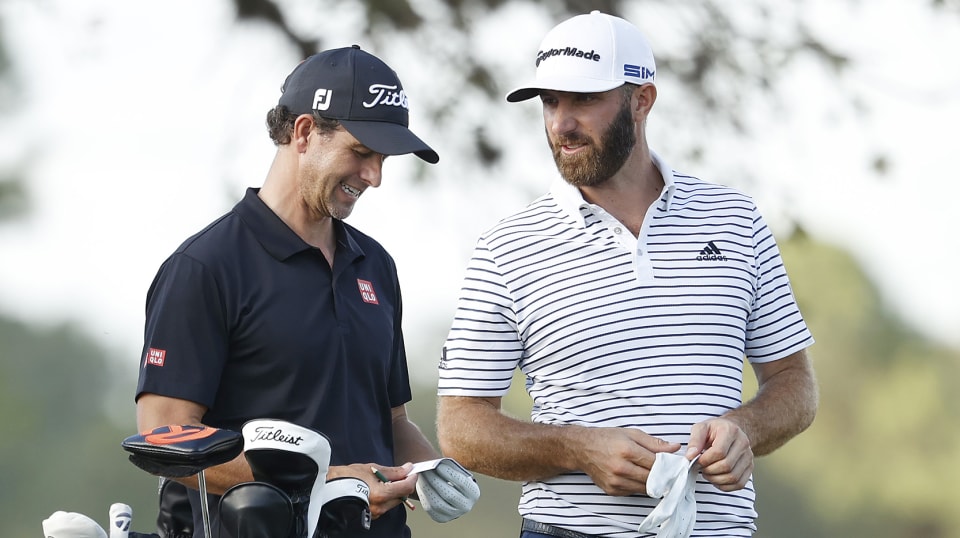 Defending FedExCup champion, world No. 1 and 2017 Riviera winner Dustin Johnson returns to action as a stacked field takes on famed Riviera Country Club at The Genesis Invitational. The tournament, an L.A. staple, has drawn 16 of the top 20 in the FedExCup standings and eight of the top 10 players in the world, plus three-time champion Bubba Watson, two-time winner Adam Scott and more.

PGA TOUR LIVE will offer exclusive early-round coverage of the action in L.A. Dustin Johnson, Justin Thomas, Rory McIlroy, Brooks Koepka, Jon Rahm and Bryson DeChambeau are among the names that will appear in this week’s Featured Groups. To get you ready for LIVE’s coverage, we convened our experts for a roundtable discussion on each group. Enjoy.

Morikawa hasn’t played since a pair of T7s in Hawaii but ranks in the top two in Strokes Gained: Approach-the-Green – ideal for a course where the greens are notoriously hard to hit. FedExCup No. 1 Cantlay is contending every time he tees it up. Rahm has two top-20s in two starts at Riviera. Who will be the low man in this super group?

CAMERON MORFIT: Cantlay said he had found something after barely making the cut and finishing second at The American Express, and I am not going to doubt him in the wake of his T3 at the AT&T Pebble Beach Pro-Am. If the putts fall at Riviera, look out.

BEN EVERILL: I have to go with Cantlay just based off recent form. The only thing that has stopped him winning at The American Express and the AT&T Pebble Beach Pro-Am is the odd mistake here and there. In my view he is less likely to make as many errors as the other two over the four days. Plus – Riviera is a venue that often rewards the best strikers rather than best putters so he only needs a half decent week on the greens.

ROB BOLTON: All three rightfully are in my Power Rankings – Rahm at 4, Cantlay at 8 and Morikawa at 12 – so it’s a three-way pick’em. Cantlay has played more stressful golf of late, so he could be a little fatigued, and Morikawa could be a bit rusty (and he’s still gliding along the learning curve), so those are reasons why Rahm slots highest among the trio. The timing is best for the Spaniard to shine.

JEFF BABINEAU: Cantlay is looking awfully strong right now. He had a blistering finish at The American Express (closing 61), tied a course record at Pebble Beach (62) and led the field at AT&T in Strokes Gained: Tee to Green. He was right there until the final holes despite not having played well in his middle two rounds (73-70). He’s a little more likely to be sharper than Morikawa and Rahm, and with a solid putting week, Cantlay should be there again with a chance at Riviera.

These three have racked up six victories at Riviera, Watson leading the way with three, Scott two and Johnson one. All three could be considered Riviera specialists, but DJ just won in his most recent start on the European Tour, is hitting his prime at 36, and has nine top-10s in 13 starts at this storied SoCal gem. Can anything or anyone stop the DJ express this week?

CAMERON MORFIT: Depends on whether the right guy gets hot with the putter. Cantlay could be hard to stop if it happens for him, and JT. And don’t forget about Rory. After shooting a final-round 64 (T13) in his last start at the Waste Management Phoenix Open, he said he had gone back to using a line on the ball as opposed to the yardage book to help him with aim. But if I had to pick THE favorite? Yeah, it’s DJ.

BEN EVERILL: Biggest threat to DJ is the man himself but I’m confident in Adam Scott ahead of his title defense. He has worked out a plan to peak one week of each month and this week is his February slot. He knows Riviera like the back of his hand and will be right up there come Sunday afternoon.

ROB BOLTON: Only one thing – L.A. traffic. He’s easily the No. 1 in my Power Rankings in a field jammed with 1a’s.

JEFF BABINEAU: Cantlay and Justin Thomas come to mind (and even Jordan Spieth again, because he loves the place), but really, DJ might be the only one who can stop the DJ Express. He shows up, checks in, and his good golf always seems to be with him. His record since 2009 at the Riv: 12 starts, one victory (2017), three top-3s, nine top-10s and only two missed cuts. In Hollywood parlance, at Riviera this week, among a star-studded cast, there is no questioning who secured the role as leading man.

McIlroy, T5 and T4 the last two years here, is a beast off the tee. But he could be the short guy in the group with DeChambeau (also T5 last year) and Champ (three MCs in three starts at Riv). What’s the best way to cope when a guy is outdriving you on every hole?

CAMERON MORFIT: The best way to deal with the indignity of being outdriven is also the best way to deal with playing an away game in front of a hostile crowd: get ahead early on the scoreboard. Sports law: He who leads generates the most swagger, which tends to be expressed on the scoreboard. Driving distance numbers don’t matter so much after that.

BEN EVERILL: Best way? Make more birdies. Ha, sorry for the dad joke. But the reality is just not to care what he’s doing and focus on your own game. There is always a glass half full answer and it is similar to when you play match play. Rather than be concerned the guy is banging it past you – see it as an opportunity to be the guy in control of the pressure. You get to hit into the green first. If you execute that the pressure shifts and the bomber starts to get annoyed.

ROB BOLTON: If you’re concerned about your playing partner as a touring professional, you need to reset your priorities and strap on blinders. If you can understand that that can be easier said than done with egos fueled by an endless stream of inner conceit at the highest level of the sport, then you also can understand that you know what to expect before any emotion emerges. Simplify and attack.

JEFF BABINEAU: I can remember a tournament at Bay Hill years ago in which Ernie Els was paired with Tiger Woods and Davis Love III for 36 holes on a Sunday. Woods and Love were smashing it past him all day, and it bothered Els, but he answered by winning. DeChambeau and Champ are so off-the-charts long that it shouldn’t be that distracting for McIlroy. He’ll be fine! Riviera is a place that demands much more than sheer brawn.

Byron Nelson said “Winners are a different breed of cat.” Now that Koepka, one of the best closers in the game, is healthy and hoisting trophies again, we have to ask: What exactly does that quote mean? What’s the secret sauce?

CAMERON MORFIT: A lot of guys have all the shots, but patience and the ability to slow things down under pressure are huge. After playing with Koepka in the final round at Waste Management a few weeks ago, Steve Stricker said, “He just hung around.” What he meant was Koepka made nine straight pars in the middle of the round before going 5 under for his last six. Winning on TOUR is about having otherworldly talent, yes, but also knowing where you stand and waiting patiently to find that 60-90 minutes when you absolutely can’t miss.

BEN EVERILL: For me this is signified but what Koepka did on the par-5 15th hole on Sunday in Phoenix. James Hahn, the man who had been leading, was in a meltdown and found the water. Koepka followed that shot with a laser to inside 20-feet for eagle. Winners know when the winning moments have arrived, and they nail them more often than not. Using the cat reference… they’re like the lioness going for the kill. They’re stealth like Cam says above and then pounce at the right time. Almost every time.

ROB BOLTON: Far be it from me to put words into the mouth of Lord Byron, so I will interpret his assessment on the spectrum of makeup. Playing to win is one endpoint. Playing not to lose is the other. In real time, third-party observers know where a competitor slots on the spectrum. In consideration of Koepka, there’s zero question about where he is positioned.

JEFF BABINEAU: Lord Byron once won in 18 consecutive starts, so certainly he was a rare cat. As were Jack, and Tiger. You know the motto: Winning isn’t easy. It takes great play, some patience, and a measure of luck in a bounce or two. Thomas has shown he’s very capable of winning  anywhere, anytime. Koepka knows how to win the big ones (four majors), but is seeking consistency to to win more often. He needs more late runs like the one he had at Waste Management. And Schauffele has all the tools, but is seeking that little sauce, or extra confidence, to push him across the finish line again.