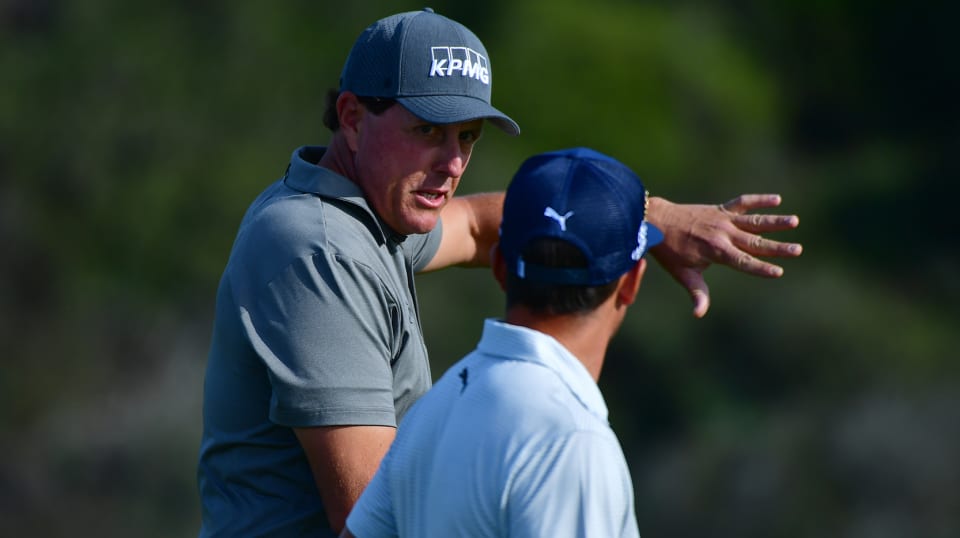 PGA TOUR LIVE is back. This week’s The American Express marks the return of the streaming service, which showcases exclusive early coverage from the PGA TOUR. The broadcast from PGA West will begin at noon Eastern on Thursday and Friday.

Related: Tee times | The First Look, How to Watch

A star-studded charity match also will be available Wednesday on PGA TOUR LIVE. Country music artist Jake Owen and soccer star Landon Donovan will team with Tony Finau and Paul Casey in the nine-hole match from PGA West’s Stadium Course. Mickelson will host the match and participate through “Phil’s Challenges.” Each player, including Mickelson, will take a shot at a $1 million hole-in-one for charity on Alcatraz, as well. The match will tee off at 2 p.m. Pacific.

The Featured Groups, which will tee off at 1:40 and 1:50 p.m. Eastern each day on PGA West’s Stadium Course, are listed below. To prepare you for PGA TOUR LIVE’s coverage, our roundtable of writers convened to answer a burning question around each group. Enjoy.

– Andrew Landry has a win and playoff loss in his last three American Express starts. Will he finish as low man in this group?

SEAN MARTIN: Landry has nine career top-10s on TOUR. Two have come at this event. But I think Reed is the man to beat in this group. Reed has a win at this event, in 2014, and earned his PGA TOUR card at a Q-School on the two courses in use this week. He has exhibited some incredible consistency lately, finishing in the top 25 in two-thirds of his starts since the start of last season, including all four in 2020-21.

BEN EVERILL: Not this time. Patrick Reed is a desert warrior who has surprised us by playing in this desert instead of being in a Middle East one. He should threaten to win the whole thing.

CAMERON MORFIT: I’ll subscribe to the horses-for-courses theory and go with defending champ Landry here. I know he didn’t show much at the Sentry TOC and missed the cut at the Sony Open, but he won here last year after missing five consecutive cuts. It wasn’t that long ago that he finished T4 at The RSM Classic. I’ll say he picks up right where he left off in the desert and notches another top-10 finish.

MARTIN: Finau is just 31. He has plenty of time left. I think 10 is within reach but seven seems more realistic. I still think Finau could have some multiple-win seasons ahead of him.

EVERILL: Should be 10 (or more), I want to say six but I’m going to take the under and say four.

MORFIT: With his talent I would have guessed double digits, but it’s just so hard to win on TOUR, and he’s let a few victories pass him by already. I’ll say he ends up with six wins, and I wouldn’t be at all shocked if one of those was a major.

– What do you expect out of Koepka this year?

MARTIN: He had two top-10s in the fall but also ended the year with a missed cut. I think he will return to East Lake but I’m not sure about a win. He had opportunities to win late last season but wasn’t able to capitalize on them. He said Tuesday he feels good, so this week will be an opportunity to show us what to expect.

EVERILL: If he’s fully fit, a return to some dominant wins. When he’s at his peak, he’s a beast. I’d love to see him and DJ down the stretch in a tournament at some point.

MORFIT: That’s just it, Ben – the big IF remains. Is he healthy again? If so, I’d expect him to make a strong run at the U.S. Open at Torrey Pines South, which is precisely the type of big, brawny course that sets him apart from the rest.

– More likely to join Cantlay as a winner on the PGA TOUR this season, Mickelson or Fowler? It’s been two years since each won.

MARTIN: Mickelson finished runner-up not long ago at the World Golf Championships-FedEx St. Jude Invitational, and he has some winning mojo after his back-to-back triumphs on PGA TOUR Champions. His recent results haven’t been very good, in part because of his obsession with hitting bombs, but if he could back off the gas a bit, and the putter gets hot, he can pick off another win after age 50.

EVERILL: I’m not sure either will but of course both could! I’ll stick with youth and say Fowler. His good stuff is more likely to turn up over four days while Mickelson’s mistakes continue to get punished exponentially on this TOUR.

MORFIT: I’m guessing we haven’t seen the last of Fowler in the winner’s circle, even though his swing changes have taken longer to solidify than he probably thought they would. It’s the old story of working so hard on the swing you neglect your putting, but his above-average ability on the greens will return, and I’m guessing his swing change is pretty close to being complete.