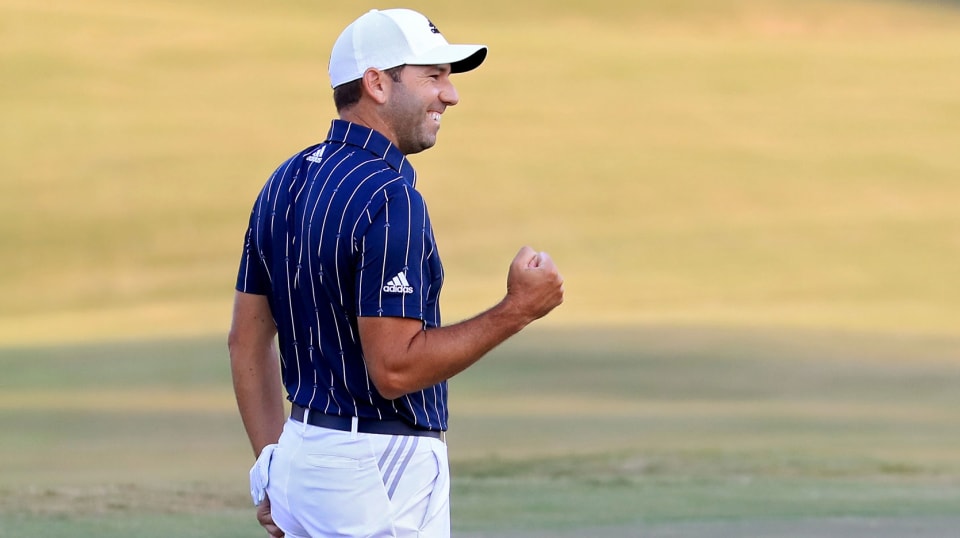 Although he was a past champion at the Sanderson Farms (2015), Malnati had been largely absent from the conversation for the last five years. He missed the FedExCup Playoffs last season, and barely made THE NORTHERN TRUST before finishing 118th in the FedExCup in 2019. It was more of the same in 2018, with just two top-25 finishes.

No wonder he was all smiles even in finishing runner-up to Garcia. For one thing, the final-round 63 was his career low. Also, Malnati’s top-10 finish gets him into the field at this week’s Shriners Hospitals for Children Open in Las Vegas, where he’d been third alternate.

Asked what he would do for an hour and 40 minutes until the leaders finished, Malnati’s answer said it all: “I’m literally staying walking distance from the club,” he said. “I might go hop in the pool with my boy. You thought I looked like I was having fun out there today? You should see him in the water. It’s amazing.”

Sweden’s Henrik Norlander had missed the cut in his first two starts this season after shooting opening-round 75s. The 33-year-old product of Augusta University had no such trouble at the Sanderson Farms, where he went 4 under for his last five holes for a 65 and T4 finish, four back.

Norlander eagled the third and 15th holes and had three for the week, tied with Keegan Bradley for most in the field. Bradley had gotten off to a similar start this season, missing the cut at the Safeway Open and U.S. Open before contending in his first appearance in Jackson. He eagled the par-5 11th hole for the third time in four tries and shot 69 to also finish T4.

This was not Camilo Villegas’ first PGA TOUR start since the passing of his daughter Mia, who was just 22 months old when she died July 26 after battling tumors on her brain and spine. But with a final-round 66 and T23 finish, the four-time TOUR winner looked close to his old self.

“I’m just excited to swing a golf club, man,” said Villegas, who has dealt with a shoulder injury in addition to Mia’s health struggles the last few years. “The last two years have been crazy to say the least, injury and then with our family situation, but like I told my wife, we can’t change the past, so we’re focusing on what’s going on right now, having a good attitude, and once again, I’m very, very happy to be swinging a golf club again.”

Villegas missed the cut in his previous start, at the Safeway Open. Before that? Another MC at The Honda Classic in March. Now, he says, he’ll play a full fall schedule on TOUR, continuing with next week’s Shriners Hospitals for Children Open in Las Vegas.

Tyler McCumber (69, T6, five back) posted his second career top-10 finish in his last two starts, and now he’s in the unfamiliar position of fifth in the FedExCup. Granted, it’s early, but this is the best stretch of golf ever for the surfer and outdoors lover from Jacksonville, Florida.

Then there was MJ Daffue (pronounced Duffy), a 31-year-old from South Africa who has had a rough go of it as a professional but shot a final-round 69 for a career-best T12 finish. Daffue, who had Monday-qualified for the Sanderson Farms, now goes to the Shriners Hospitals for Children Open in Las Vegas, where he’s already got a spot in the field as a sponsor’s exemption.

Incredibly, Daffue, who played for Lamar University in Texas, has Monday-qualified nine times in his last 14 tries on the PGA TOUR and Korn Ferry Tour combined. He was bidding to become the first Monday-qualifier to win on TOUR since Corey Conners at the 2019 Valero Texas Open, and while that didn’t happen, there were so many positives.

He won’t have to try and keep up his incredible Monday-qualifying streak this week in Vegas. (He would’ve had a hard time getting there in time, anyway.) And his T12 was his career best by a substantial margin after his T22 at the Workday Charity Open last summer.