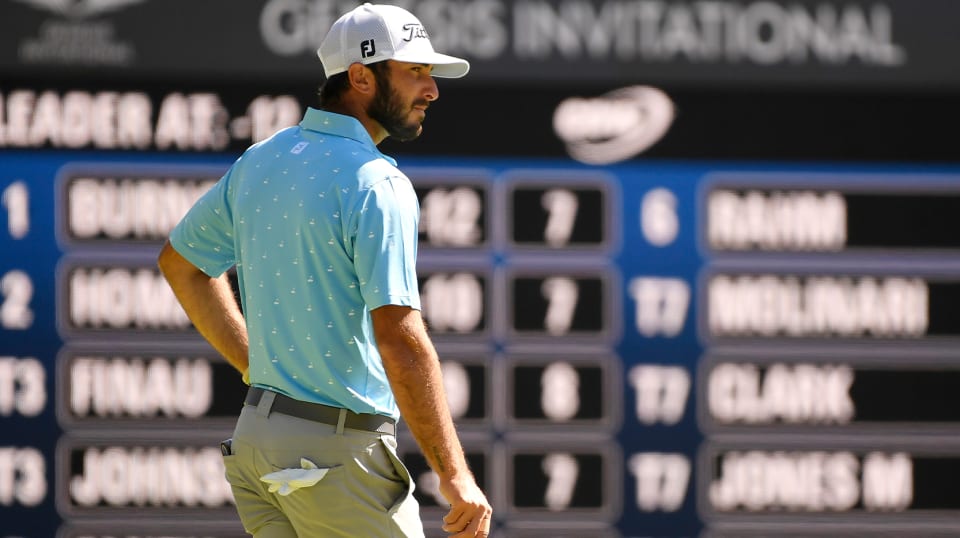 Max Homa has been a part of The Genesis Invitational scenery since he was a toddler on his father’s shoulders, so to claim his second PGA TOUR win at Riviera Country Club was an emotional experience.

Homa survived missing a short putt on the 72nd hole by outlasting Tony Finau in extra holes – ultimately beating both his competitors and some tough, hard and fast conditions in tricky winds.

He moved to 10th in the FedExCup and 38th in the world rankings, catapulting him into the field for the World Golf Championships–Workday Championship at The Concession this week.

Here are five stories you may have missed from The Genesis Invitational.

Max Homa is a proud native of Los Angeles and says going to The Genesis Invitational from the age of 2 is what helped him fall in love with the game of golf. Growing up within 30 miles of Riviera Country Club, he was a constant figure at the event, first as a toddler on his father’s shoulders and by the end a bona fide high school star who would return to L.A. as a Cal Bear to win the Pac-12 Championship against UCLA.

After a close call a year ago when he was T5 behind champion Adam Scott, Homa was determined to make his childhood dreams of winning his home tournament come true. A clutch up-and-down birdie on the 17th hole saw him join the lead and an incredible one-two punch of driver-wedge on the 72nd hole to 3 feet look set to secure it. But nerves got the best of him and he lipped out the short putt, sending him to extra holes against Tony Finau.

Showing tremendous grit he managed to turn the negative into a positive despite hitting his first drive in the playoff against a tree. A magical short game recovery shot allowed him the chance to survive when Finau missed a putt to win, and a hole later he was crowned champion. He joined Bubba Watson (2014) as the only two players since 1990 to win at Riviera with a bogey-free final round.

Statistically, Homa outperformed the field by +2.20 strokes per round from tee to green, marking his best Strokes Gained: Tee-to-Green performance in an event on TOUR (four measured rounds).  He played Nos. 15-18 at 7 under for the week, best of any player and tied Phil Mickelson (2009) for the best score to par on these holes by a winner during The Genesis Invitational (since 1983). Homa recorded a one-putt on 38 of 72 holes, including 21 on the back nine. He started the week with 11 consecutive one putts, marking the longest streak of consecutive one putts to start an event by a winner in the ShotLink era.

2. Finau falls short but may have turned a corner.

Tony Finau was unable to break his infamous win drought – now making it 21 top-five finishes without a win since the 2017-18 season. But while the nerves seemed to be part of his playoff effort as he missed a chance to win from close range, and another chance to extend from makeable distance, there was certainly some positive news to come out of this particular loss.

Finau has long been criticized for failing to close from positions of strength, but on Sunday at Riviera he looked like a player determined to win. A brilliant 7-under 64 in the final round in tough, windy conditions had all the makings of a championship run and didn’t look at all like a player afraid to win.

If he can truly take the positives from such a bold Sunday charge, this incredible talent will breakthrough soon, and as he stated, “one of these days it will happen for me and hopefully turn into kind of a domino effect.”

He now sits sixth in the FedExCup as one of the TOUR’s most consistent performers.

Find out more on his continued glass-half-full approach here.

Sam Burns led the tournament through the first three rounds, opening with a tournament record 12-under 130 from the first two rounds. The 24-year-old has found himself up in the mix a handful of times this season – most notably the Safeway Open where he was overrun by veteran Stewart Cink.

On this occasion, he kept the lead until stumbling through the difficult section of Riviera’s back nine on Sunday. During the final two rounds, he played Nos. 12-15 in 6-over par, which was the difference in the end.

But rather than dwell on the negative, the positive here is that after his stumbles he could have easily packed it in. Instead he birdied the penultimate hole to set up a chance to join the playoff if he could birdie the last. In the end, his birdie chip from just off the 18th green was tracking but pulled up short.

“I feel like I did a lot of good stuff. I putted it well. I feel like my putter kind of kept me in it. Just wasn’t able to give myself enough opportunities,” Burns lamented afterwards. “I didn’t drive it well enough to really score the last seven holes.”

4. Watson speaks out on mental health.

Bubba Watson is possibly one of the most polarizing characters on the PGA TOUR with some loving the self-taught eccentric star and others feeling differently about the 12-time winner. But in a show of strength, Watson spoke out about his personal battles with anxiety and ADHD in a bid to help others going through similar situations.

It turns out that Watson has battled some significant mental demons over the years, and it is an ongoing battle he faces. But now, with the benefit of maturity and wisdom, he sees speaking out as the right move.

This is not Watson trying to make excuses for parts of his life he thinks he could have done better, but it does provide context to many incidents that some have judged him solely on in the past.

Mental health matters and as Watson says, “It’s OK to not be OK sometimes.” We should all keep this in mind.

While on health issues, we received a positive update on Joaquin Niemann’s infant cousin Rafita and his plight with Spinal Muscular Atrophy.

As the tournament host at The Genesis Invitational, Tiger Woods was at Riviera Country Club despite being unable to play following his recent back surgery.

The 82-time TOUR winner jumped onto the CBS broadcast and gave some updates on his health but was vague as to exactly when we can expect him back competing on TOUR.

“I’m feeling fine,” Woods said. “I’m a little bit stiff. I have one more MRI scheduled so that we’ll see if the annulus (fibrosus) is scarred over finally and see if I can start doing more activities. But still in the gym, still doing the mundane stuff that you have to do for rehab, the little things before I can start gravitating towards something a little more.”

Woods has now undergone five back surgeries since April 2017.