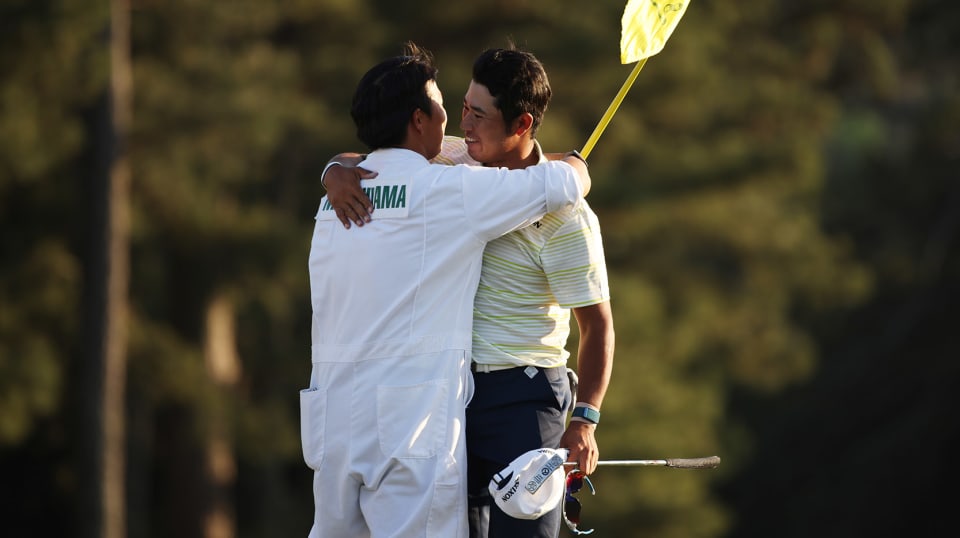 From an idol to an immortal. Hideki Matsuyama became the first male player from Japan to win a golf major championship, making him the toast of more than 126 million people – at least.

You see, he’s not just big in Japan. Matsuyama has been a fixture on the PGA TOUR for nearly a decade as one of the “most talented to not win a major player”. Now he’s out of that conversation and into the history books thanks to his one-shot win at Augusta National.

He moved to seventh in the FedExCup and 14th in the world rankings.

Here are five stories you may have missed from a historic Masters.

1. Matsuyama the pride of a nation

Hideki Matsuyama’s life will never be the same. He was already an absolute idol in Japan and now he will be inked in the annals of their sporting history for all time as the first male player to win a golf major.

“He’s a bit like a Tiger Woods is to the rest of the world, Hideki in Japan. The crowds in Japan are fanatical,” Presidents Cup teammate Adam Scott said of his mate who now joins him in the exclusive champion’s club.

“They love the game, and they love the superstars going over there. I remember I took the Green Jacket over there in ’13 when I went, and it was an incredible response I got, so I can only imagine what Hideki will experience.”

We could go on and on here about how Matsuyama saw his lead of four shrink to one, get back to five, and then ultimately won by one again but it’s likely you’ve seen that. But what we have at PGATOUR.COM is a writer who has been on the Matsuyama beat since Matsuyama was a teenager playing amateur golf.

Please, if you haven’t already, do yourself a favor and read Sean Martin’s account of a boy becoming a man, a man becoming a hero, and a hero becoming an immortal, all while staying his shy and reserved self.

Hideki Matsuyama had finally won the tournament he’d dreamed about since he was a boy, the one that proved to him a decade ago that he could compete against the best players in the world. His victory speech from Augusta National’s practice green didn’t last much longer than his famously methodical backswing, though.

2. You can’t forget the name Zalatoris

TOUR fans are well aware of Will Zalatoris by now. The skinny California kid who seemingly just yesterday had no status anywhere and was ranked outside the top 2,000 has been wowing us for more than a year from the Korn Ferry Tour to his jump to Special Temporary Member status on the PGA TOUR.

He gained some mainstream traction with a top-10 finish at the U.S. Open back in 2020, but on Sunday he entered the consciousness of many more sports fans with his runner-up finish at Augusta National. On debut.

Remember the last guy to do that? Jordan Spieth. The following year he was a runaway winner. At the time we said it wouldn’t happen again for a generation. We can’t make that promise now.

Sure Zalatoris hasn’t won on the TOUR yet, but that’s surely just a matter of time. He showed no signs of frayed nerves Sunday and you could make an argument that he didn’t lose the Masters, he just got beat. And that happens.

Jordan Spieth was unable to back up his drought-breaking Valero Texas Open win with a Masters triumph, but he sure looked like the player who went 2-1-2 in his first three starts there for most of the week.

Ultimately Spieth was tied third at Augusta National after a few too many mistakes made a charge at the lead impossible, but from where he’s been the progression is beyond heartening.

He hit more greens in regulation than anyone else in the field and made a small piece of history by being the first player in 85 Masters to birdie the tough 10th hole in all four rounds.

“I wish that I had the control of my swing that I hope is coming or I think is coming soon because it would have made things a little easier this week, and I did strike the ball really well,” he said. “I hit a lot of fairways. I put myself in position to hit a lot of greens, and distance control is a strength of mine with iron play, and I did a good job of that.

“So all in all, I’ve made a lot of good progress, but I feel like that road ahead is still significant for me.”

Get the low down on the Texan here.

You won’t find many bigger fans of Xander Schauffele then yours truly. The guy can flat out play and early in his career had seemingly been as mentally strong as anyone I can recall at such a young age.

When the fight came to Schauffele he was always ready for it. He hungered for it. And he was driven by the underdog status. The small man syndrome of proving he can cut it with the taller, stronger and even more recognized players.

It saw him win the TOUR Championship in 2017 at 23, having already won The Greenbrier, and since add two more victories including a World Golf Championships. But since his last win at the Sentry Tournament of Champions in 2019, it’s been all about the near wins.

Before Sunday I saw his three runner-up finishes this season with glass-half-full eyes. Yes, he was unable to close for a win but there was enough evidence to throw an argument against those trying to cut him down.

But on Sunday at the Masters, after showing the trademark tenacity to make three birdies in a row, hustling Matsuyama into a critical error, he stood on the 16th tee with the tournament now swinging his way.

He still trailed by two but had the tee box to the infamous Sunday pin where aces are not uncommon. He no doubt saw Marc Leishman come within a whisker of an ace in the group in front.

A great shot and Matsuyama would have felt the weight of more than 100 million Japanese golf fans crushing him. A shot anyone on the green still might the same affect and have Matsuyama feel like he needed to take aim at the pin

But Schauffele’s step-on-throat moment induced a shot that would come up short and end in a watery grave. A wild few minutes later and he was making the first triple bogey of his major championship career and his chance was gone.

He went on to say he and his caddie Austin misjudged the wind. That happens. But it just felt like he was presented the moment and the moment got him.

“I hit a perfect shot. I told Austin I flushed it, which makes it even worse.  We can share the misery together. I’m chasing. If I had a lead, I would have bailed out right or tried to hit some sort of high left to right ball to the right,” he said.

“That’s the hard part about winning out here. I think maybe I could try and hit a different shot there, maybe left to right instead of right to left, which I’m more comfortable with, and that’s definitely going to go in the memory bank.”

But enough of the gloom talk. Us X fans and the man himself are no doubt feeling the hit this morning. But take heart in his positive words about moving forward. Remember Jordan Spieth was apparently done a few weeks ago and now he’s back. Xander was never gone. He’s here it’s just the door he’s knocking on has a few solid deadbolts on it.

“If you look at my career, you could call it a big ball of scar tissue with a bunch of second places.  I don’t look at it that way. I don’t think my team looks at it that way,” he said.

“So I’ll sleep on it. I hit a good shot. I committed to it. It turned out bad. I’ll be able to sleep tonight. I might be tossing and turning, but I’ll be ok.”

5. DJ missed the cut but Jose Maria Olazabal made it and made us cry

Jose Maria Olazabal, now 55 and a PGA TOUR Champions player, was full of emotion Friday when he made the weekend.

It was the two-time Masters winner’s first cut made at Augusta National since 2014, coming 10 years after his friend and fellow champion Seve Ballesteros had passed on. He was wearing Seve’s blue and white colors, and the occasion certainly hit him, and all who saw him, hard.

“It’s like winning the event,” he said with a laugh.

“I think Seve would be happy. I miss not having him here for a big hug. I’m a little emotional. I have to say wholeheartedly that making the cut has been a primary goal in recent years. When you see the years going by and you don’t get it, it gets tough.

“I know that making the cut is not such an extraordinary thing,” Olazabal added, “but I want to dedicate this accomplishment to him and all those people who have left us over the last year.”

That list included Olazabal’s longtime manager, Sergio Gomez, who had been with him at Augusta National since 1985 but died last year. He tried to continue but began to cry. He wasn’t alone.

For defending champion Dustin Johnson it was a week to forget as he missed the cut. So too did Rory McIlroy and Brooks Koepka in his return from knee surgery.

“The three-putts killed me. You take all the three-putts away, I’m 1-under,” Johnson lamented after needing 64 putts through two rounds. Only four others managed more.

“That was kind of the difference. My speed was awful. I just left it short from 10 feet there on the last hole. I just didn’t have a good beat on the speed the last two days.”