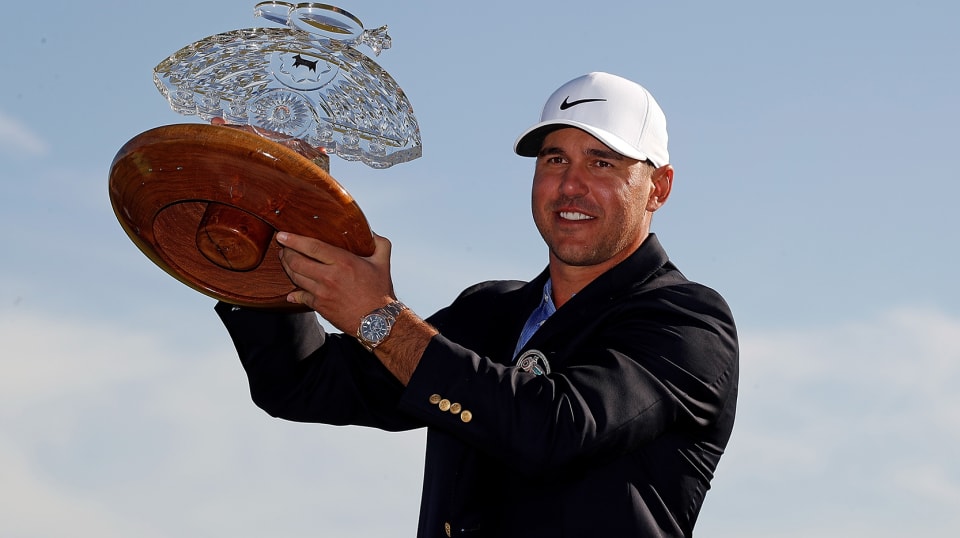 Patrick Mahomes and his Kansas City Chiefs may not have been able to fashion a comeback against Tom Brady on Sunday but it was certainly the week of the comeback at the Waste Management Phoenix Open.

Brooks Koepka had been through a dicey 18 months as injuries cut into his dominance and despite saying he was fully fit his previous three starts were all missed cuts. But when it appeared a win drought would end for either Jordan Spieth or Xander Schauffele it was Koepka who surged home on the back of a stunning chip in eagle.

Here are five storylines you may have missed from the WMPO.

Even Brooks Koepka himself had some seeds of doubt during his battle with knee and hip injuries. Would he ever be the same player who won back-to-back U.S. Opens and PGA Championships? Coming into the Waste Management Phoenix Open off the back of three missed cuts had done nothing to quell the murmurs that he must still be hurt – or worse – he just wasn’t the same guy anymore.

But Koepka has always been at his best when he feels aggrieved and something is driving him. Despite starting the final round five shots back of Schauffele and Spieth, Koepka blitzed home by playing the last six holes in five under par. The first real reminder of his old self came on the par-5 15th. He’d just birdied the previous two holes to join playing partner James Hahn at 16 under. Hahn had made his own run to lead by a couple shots a little earlier in the round but was now starting to bleed and Koepka could sense an easy kill. As Hahn sent his approach shot left into water Koepka stepped up and sent a laser to inside 20-feet. It was an alpha moment.

While he was unable to connect that eagle try the birdie kept his momentum and knowing he needed to send shockwaves to those behind him Koepka soaked in the vibe of the limited crowd – who made sure what they lacked in numbers didn’t lack in volume – and took dead aim in an attempt to drive the par-4 17th. His tee ball ended up a little short and right, about 97-feet from the hole. No matter. He went ahead and chipped in for eagle – a defining play. When it counts, this guy delivers.

For Spieth a fourth place finish – although an opportunity lost – also felt like an opportunity gained. But for Schauffele it was indeed another chance lost as he racked up an incredible eighth runner up finish since his last win at the 2019 Sentry Tournament of Champions.

The pair held the 54-hole lead and were unable to close the deal – Spieth’s magic on the greens from Saturday’s 10-under 61 was unable to be replicated and Schauffele’s precision with wedges in hand was near non-existent on Sunday. Spieth back in the mix at a TOUR event was electrifying for all those watching. Saturday had everyone buzzing.

“From a viewership point of view it definitely gets everyone excited,” two-time FedExCup champ Rory McIlroy said of his competitor. “And the way he plays… I watched the back nine (Saturday). Absolutely insane what he was doing. It’s typical Jordan.

“Once crowds come back, and if he starts to play a little better, it’ll help him, because he feeds off that energy. Everyone is excited to see him up there again. He works so hard and he just hasn’t really gotten anything out last 18 months really. So it’s good to see him back in the mix.”

Schauffele tried to keep a brave face – and his effort did move him to the top of the FedExCup standings.

“Sure doesn’t feel that way,” Schauffele said. “I think Brooks is a great example for me. He hasn’t been in great form, missed few cuts, and comes out and wins. There is a lot to be said by his actions and how he played. There is a reason he’s knocked off a bunch of majors. That’s something I’m trying to do. I need to learn from a recipe like his.

“I’m disappointed. Winning is tough. I’ll lick my wounds and come back. It was a good day to learn from some mistakes. Have to continue to stay patient until I can win again. Overall I’m playing really well, and I don’t see why I can’t knock obvious a win soon.”

3. Will Zalatoris is eyeing a WGC berth.

Zalatoris – a special temporary member after an incredible run of results – continued to put himself high up on leaderboards. While this time around he didn’t find a top 10, his T17 in Phoenix bumped him to 49th in the world rankings. This is significant because those inside the top 50 after the AT&T Pebble Beach Pro-Am this week get an invite to the World Golf Championships At The Concession on Feb 25-28.

Other top 50 cutoffs are upcoming for THE PLAYERS Championship (March 1) and the Masters (March 29) and of course the top 64 in the world will play in the World Golf Championships – Dell Technologies Match Play in Austin on March 24-28.

The U.S. Ryder Cup captain threatened to become the oldest ever winner on the PGA TOUR at age 53 but in the end was left to settle for a T4 – his first top 10 since 2017. The 12-time TOUR winner was under par all four days and ended just two shots off the lead.

It was a vintage effort from Stricker who will get to pick six players for his team to play at Whistling Straits later this year. The result will make for some fun banter in the team room given he beat a few of the likely team members!

Now there’s no talk – yet – of Stricker replicating what Tiger Woods did at the 2019 Presidents Cup. That is, being a playing captain. But he does get out and play TOUR events with the idea of keeping a close eye on those who might make the team. Stricker played with Koepka in the final round.

“It was a lot of fun. You know, that’s the reason why I come to play in these still. I haven’t shown that in the past, but I’ve been playing better lately. Feeling a little bit better physically, too,” Stricker said.

“So it’s nice to see some of that work is paying off. It was a lot of fun. I catch myself though rooting for guys, like Brooks, and then I’ve got to pull myself back and say, Wait a second, I’m trying to win this thing, too.”

Justin Thomas was lurking with intent with 18 holes to go before he received some devastating news – his grandfather Paul had passed away.

The Thomas family is deeply rooted in golf with his father Mike, and Grandfather Paul before him, working as PGA professionals. Paul played in the 1960 and 1961 PGA Championships.

Thomas would often speak of his grandfather and famously had his FedExCup winning press conference interrupted by one of their many phone calls. He posted this tribute on Instagram after battling through Sunday’s round to a T13 finish.

Clearly trying to do it for Paul, Thomas was visibly shaken, as were his parents who as usual were walking the fairways watching. Playing at all was a success.

Everyone at Monday Finish, and the entire PGA TOUR family, send our condolences to the Thomas family.