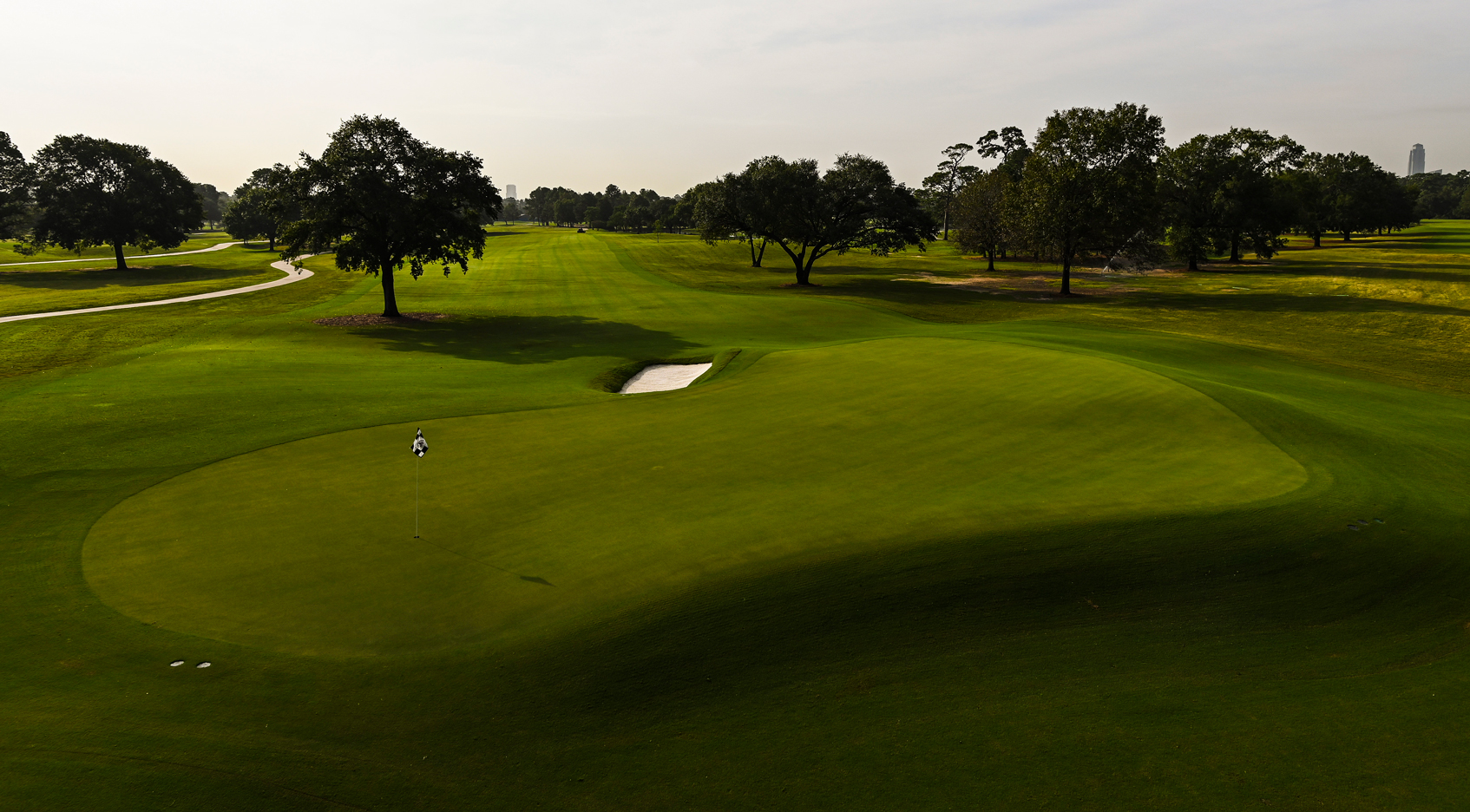 This week, the PGA TOUR visits a radically renovated municipal course in the midst of a large and diverse metropolis. Memorial Park, recently redone by the iconoclastic architect Tom Doak, is the venue for this week’s Vivint Houston Open. Doak designed a course that is welcoming to a wide variety of players and hospitable for fans in the country’s fourth-largest city. He was more concerned with creating excitement than protecting par.

Before this landmark week begins, here’s Five Things to Know about Memorial Park.

Memorial Park began as a nine-hole course with sand greens, built in 1912 near the hospital at Camp Logan for use by convalescent soldiers. In 1935, following the closing of the hospital, golf course architect John Bredemus redesigned the course. Bredemus also designed Colonial Country Club in Fort Worth, which has hosted the Charles Schwab Challenge since 1946. Bredemus, a Princeton graduate, was the 1908 national decathlon champion, as well.

Major champions Jimmy Demaret and Dave Marr are among the players who got their start at Memorial Park. The course is one of a handful where Marr’s children spread their father’s ashes.

This isn’t the first time Memorial Park has been the venue for the Vivint Houston Open, however. It hosted the event 14 times between 1947 and 1963. Winners at Memorial Park included major winners Arnold Palmer, Bobby Locke, Jack Burke Jr., Bob Charles, Bobby Nichols and Jay Hebert.

Charles’ win at Memorial Park in 1963 was the first on the PGA TOUR by a left-hander. He won the Open Championship later that year to become the first left-hander to win a major.

Memorial Park nearly was the site of Jack Nicklaus’ first PGA TOUR win, as well. Nicklaus lost a playoff to Nichols after suffering a strange penalty in the third round of the 1962 Houston Open. While tending the flag for his boss’ 35-foot birdie putt, Nicklaus’ caddie accidentally pulled the hole liner out of the ground. Nicklaus was assessed a two-stroke penalty after his ball struck the liner.

Nicklaus got that first win seven weeks later, at the U.S. Open, no less.

Doak is one of the top names in golf course architecture. He designed or renovated 13 courses on Golf Digest’s list of America’s 100 Greatest Golf Courses. This will be the first time a PGA TOUR event has been conducted on one of his designs, however.

“There are some people who think I can’t do (a TOUR course),” Doak says. “I don’t like anybody saying I can’t do something.”

Other famous Doak designs include Pacific Dunes and Old Macdonald at Bandon Dunes Resort in Oregon, Streamsong Blue in Florida, Ballyneal in Colorado, Cape Kidnappers and Tara Iti in New Zealand and Barnbougle Dunes in Australia. Doak’s Renaissance Club has hosted the Scottish Open and Sebonack, which he designed with Jack Nicklaus, hosted the 2013 U.S. Women’s Open.

“I’ve been called a lot more names than most golf course architects,” Doak wrote on his website. “Iconoclastic. Cerebral. A traditionalist and a radical.

“Most of all, I’ve been labeled as controversial. But so, too, were my heroes in the business, Alister Mackenzie and Pete Dye.”

After graduating from Cornell, Doak spent a year in the British Isles to study the great links courses. His design philosophies are still influenced by his time overseas. He is known for courses that utilize the natural terrain and give players multiple ways to approach the hole, making his courses playable for a variety of skill levels.

“In that year abroad, I discovered a challenging, natural outdoor sport played by all ages on exciting courses,” Doak wrote on his website. “Ever since, I’ve felt a responsibility to build courses which reflect the ideals of the game as the Scots still play it.”

Largescale renovations, which require courses to shut down for extended periods of time, are usually reserved for exclusive country clubs with small memberships, not city-owned courses accustomed to 60,000 rounds a year.

To add to the challenge, Doak’s team needed to fulfill multiple objectives. They were tasked with creating a course that would be compelling for PGA TOUR pros and playable for weekend golfers.

“We agreed that our priority should be not to defend par but to provide opportunities for dramatic lead changes and excitement for both golfers and fans,” Doak wrote on his site.

The $34 million renovation, which was funded by the Astros Golf Foundation, also included a double-decker, night-lit driving range, a new First Tee facility and short course, and the Chevron Center for Education and Golf, which will provide after-school programs in STEM education.

Doak realized Koepka’s dedication to the project from the very beginning. After sending his first email to Koepka, Doak didn’t expect to hear from him until they met on-site a few weeks later. Koepka responded quickly, sending his answers while in Korea for the 2018 CJ CUP @ NINE BRIDGES. Koepka won that event reach No. 1 in the world ranking.

“He got back to me the next day, in the middle of the event in Korea that he won,” Doak told The Fried Egg podcast. “Memorial Park is already 7,300 yards long and he said he really thought that was long enough. He didn’t think you needed to build it much longer to test the players. He thought you should do the details differently, but it wasn’t all about length. He’s thought about architecture. He has some definite ideas about what he’d like to see.”

A variety of length on par-3s was one thing Koepka wanted to see. Memorial Park has two par-3s under 170 yards, as well as a 237-yarder. An exciting finish that would be easy for fans to watch was another thing that Koepka, Doak and Astros owner Jim Crane agreed was important.

Doak was on-site for the first PLAYERS Championship at TPC Sawgrass. The tournament fell during spring break so Doak, a Cornell senior who interned for Dye, flew down to Florida to shadow the Stadium Course’s architect. The week influenced Doak’s future work, inspiring him to not shy away from controversy nor to fear veering from the norm, he said. He watched as Dye observed players competing on the new course and unflinchingly listened to their criticism.

The Stadium Course was a groundbreaking design because of its penal nature and extreme undulations, as well as its fan-friendly design. The layout created hubs of activity where fans could see multiple holes at once, and the closing holes were designed to induce drama.

Memorial Park has a similar closing stretch. After a starting with a difficult trio of holes, the back nine dares players to take chances. The final six holes include two potentially drivable par-4s, two par-5s, a short par-3 and a brutal finishing hole.

It starts with the 13th, which, despite not having any bunkers or water, Doak said is one of the toughest drivable par-4s he’s played. The skinny green is guarded by steep slopes of short grass. The next hole is a reachable par-5. The 15th hole is less than 150 yards, but the skinny, angled green is fronted by a steep bank that leads into a creek. The next two holes – the par-5 16th and the par-4 17th — offer eagle opportunities but also feature peninsular greens that jut out into water. The 17th is 382 yards but has a forward tee that makes it drivable.

The 16th and 17th greens are located across a lake from each other, allowing fans to watch dramatic shots from a single spot.

The finishing hole is a par-4 of approximately 500 yards. The three greenside bunkers are the most of any hole on the course.

It may seem strange to remove sand from a course that’s preparing to host a PGA TOUR event, but Doak and Koepka agreed that reducing the number of bunkers could challenge professionals while making Memorial Park more playable for everyday golfers.

Memorial Park used to have 54 bunkers. Now it has 20. Removing bunkers also reduces maintenance and makes it easier to get golfers back on the course after heavy rain, something that Houston is familiar with.

Sand traps have been replaced by steep slopes covered in short grass. They allow weekend players to use their putter more often while challenging professionals with shots that require a deft touch if they want to get the ball close.

“When I got together with Brooks, one of the things I asked him was would you care if we didn’t have many bunkers? He said no,” Doak told The Fried Egg. “If you’re trying to design something to get the average guy around and trying to make it challenging for the TOUR player, why put a bunch of bunkers in? … The TOUR players would be the first to tell you they don’t think about the bunkers all that much.”

Said Don Mahaffey, Memorial Park’s project manager, “There are fewer bunkers tight to greens but lots of tight grass slopes and contours. The 10 handicap can get up onto the green and have a putt for par but the TOUR pro is going to have a longer shot. The green surrounds repel shots, and it’ll be a tight lie to an elevated green. Brooks felt that would challenge them and be easier for the muni player.”