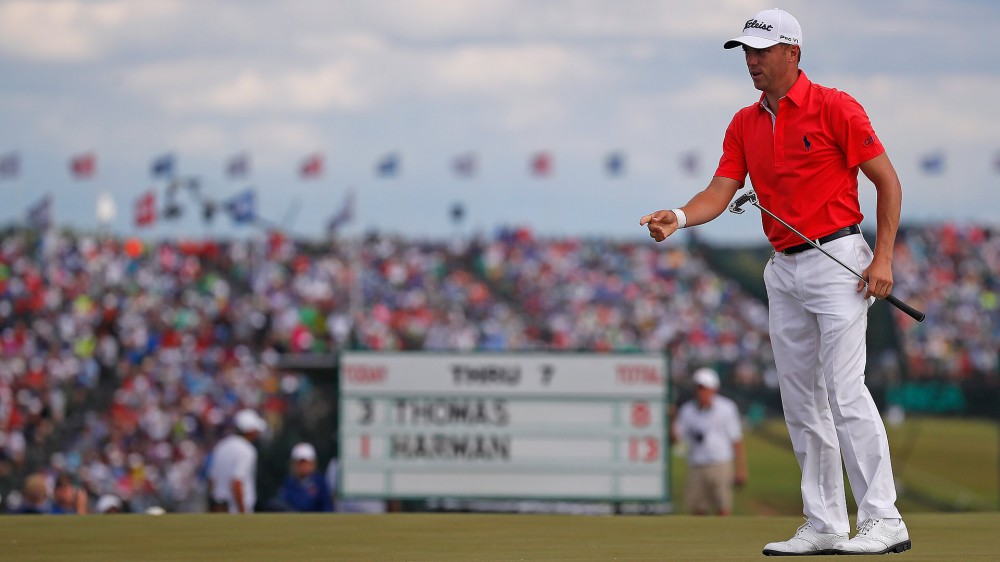 ERIN, Wis. – It’s never easy to back up an ultra-low round, particularly in a major, and Justin Thomas learned that lesson the hard way Sunday at the U.S. Open.

Thomas was only one shot off the lead after a third-round 63 made him the first player ever to shoot 9 under in the U.S. Open, but he faltered out of the gates with bogeys on three of his first five holes and never challenged as Brooks Koepka raced to his first major title.

Thomas’ closing 75 was 12 shots higher than his score for the previous day. He left Erin Hills with his best finish in eight career major appearances, but his final-round struggle placed him in a tie for ninth at 8 under, eight shots behind Koepka.

“I felt like it was the lowest I could have shot. I just didn’t have it today,” Thomas said. “But it made me feel a lot better seeing Brooks shoot 5 under. I would have had to play some pretty spectacular golf to catch him. Anytime you don’t win, it stings. But if 12 or 13 under would have won, it would have hurt really bad.”

Thomas hit a nervy hook off the first tee that rolled into a hazard lining the fairway, and although he managed to save par it proved to be a sign of what was to come. He hit 11 of the next 13 fairways but found only nine of 18 greens in regulation, and he made only one birdie, on No. 10, that merely got him within four shots of the lead.

“I mean, to be honest, it just sucks to not even have a chance on that back nine,” Thomas said. “To try to go out there and try to get in a top 5, or trying to get up near the lead is not what I play for. But unfortunately, that’s really all I was dealt, so it’s what I had to try to do.”

Thomas is an early riser and said it was difficult to pass the time prior to his 2:54 p.m. CT tee time. The 24-year-old also struggled to stay away from his phone, knowing the deluge of articles and messages that were awaiting following his record-setting 63.

“I’d never teed off this late before, so that was different