Home Golf News & Information From Nelly to Phil to Bryson, ranking the top 15 golf shots in 2021 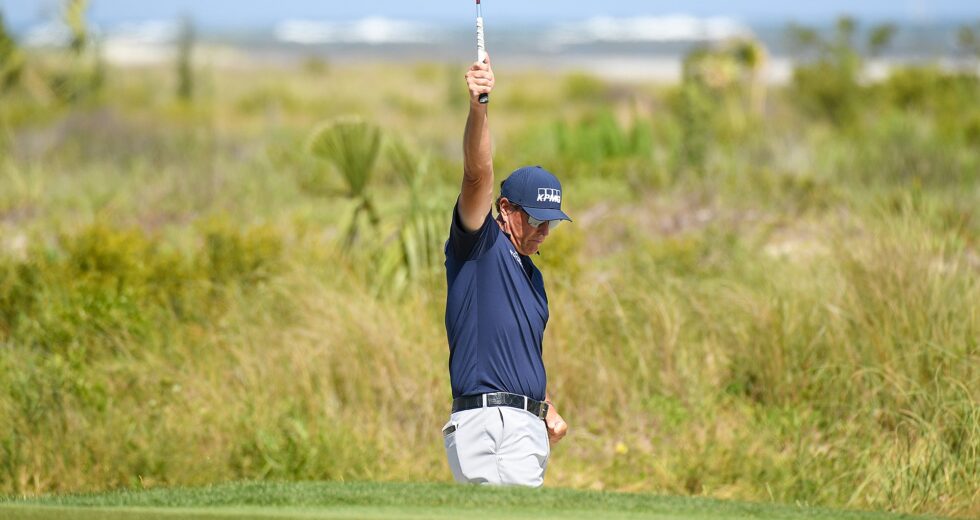 In golf, some shots are memorable because of their importance. Others are remembered for their sheer difficulty. Some check both boxes.

From Phil Mickelson’s bunker hole-out during the final round of the PGA Championship to Nelly Korda’s near-albatross at the KPMG Women’s PGA, here is this scribe’s ranking of the top 10 shots of 2021:

Nelly Korda hit arguably the best 7-wood of the year, in any league, when she almost holed out for albatross from 243 yards out on the par-5 fifth hole at Atlanta Athletic Club. She tapped in the eagle to go two shots up on Lizette Salas and never looked back, winning her first major, at the KPMG Women’s PGA.

If one shot stands out from Phil Mickelson’s final round at Kiawah, it’s this bunker hole-out at the par-3 fifth hole, which gave Mickelson a two-shot lead. Mickelson had already made two early bogeys – and he’d bogey the sixth, too – but this was the jolt he needed to ultimately get the job done, winning the PGA at age 50.

We love a good recovery shot, and Viktor Hovland escaped big-time at East Lake’s par-4 fifth hole during the first round of the Tour Championship. From a pine straw lie, Hovland hooked a wedge up and around a tree and side-spun it into the hole from 128 yards out. As far as sheer difficulty, this may have been the shot of the year.

As if hitting a good shot after taking a penalty drop isn’t hard enough, Patrick Reed didn’t just give himself a chance at birdie after his tee ball found the penalty area at the par-5 17th hole in Bermuda. From 210 yards out and the ball in the rough and slightly above his feet, Reed’s third shot found the bottom of the cup for eagle.

5. The craziest of flops

On the ropes in his and Justin Thomas’ foursomes match against Sergio Garcia and Jon Rahm at the Ryder Cup, Jordan Spieth hit an insane flop shot from a gnarly, extreme side-hill lie at Whistling Straits’ par-3 17th hole, his ball landing 6 feet from the hole. Thomas missed the putt, but the image of Spieth nearly running into Lake Michigan after making contact will never be forgotten.

6. Not one but two major-winning putts

Hands down, the two most memorable putts struck this year were in the same tournament, during the same round and off the same putter face. First came Rahm’s 25-foot birdie make at No. 17 that gave him a share of the U.S. Open lead at Torrey Pines. He then got up and down from the sand at the par-5 closing hole, capping his tournament with an 18-foot make that would secure him a one-shot win over Louis Oosthuizen for his first major.

7. The drives heard ’round Orlando

As the anticipation grew and grew, Bryson DeChambeau finally took a shot at driving it over the massive lake at Bay Hill’s par-5 sixth hole during Saturday’s third round of the Arnold Palmer Invitational. He didn’t drive the green, but he did clear the water with a 370-yard poke that left him in the right rough about 70 yards from the green at the 555-yard hole.

His Sunday drive at No. 6 went 377 yards and found a bunker 88 yards from the hole. He missed the green with his next shot and made birdie.

Andrew McGee’s title as the only person to ace a par-4 in PGA Tour competition remains. Richy Werenski’s tee ball at the 304-yard, par-4 14th hole at Quail Hollow came in a little too hot, hit hard off the flagstick and ended up 18 feet away. Werenski missed the eagle putt, too, but it was a heckuva drive nonetheless.

9. Spieth hooks it in

Jordan Spieth is such an artist. He put a lot of english on this approach shot at Pebble Beach’s 16th hole, and from 165 yards out found the bottom of the hole with a hooked 8-iron.

Who doesn’t love a good driver off the deck? From 300-plus yards out at Torrey Pines’ par-5 ninth, Bubba Watson unloaded on a driver from the fairway and found the green. A thing of beauty.

Tied for the lead and having hit his tee ball just short of the green at TPC Scottsdale’s drivable par-4 17th, Brooks Koepka clipped his second shot nicely, landing his ball on the fairway cut before it rolled into the hole. Koepka led by two shots after the eagle and went on to win by a shot.

12. Nearly buckets for the Bucket Boy

Joe Highsmith beat Oklahoma State’s Aman Gupta on the 18th hole at Grayhawk to send Pepperdine to the NCAA final, and he did so thanks largely to this fairway-bunker shot. A touch heavy and Highsmith would likely find the water. A touch thin and he’d probably catch the bunker lip. He hit it perfectly, to 8 feet, and calmly lagged it close for the concession.

After hitting his tee ball at Riviera’s 10th hole up against a tree, Max Homa had to improvise. He ended up hooding a wedge, finding the green and extending his playoff against Tony Finau. Homa won on the next hole.

As far as golf shots go, this wedge was pretty straightforward. But considering Xander Schauffele needed to get up and down from 100 yards on the final hole in Japan to win Olympic gold outright, that kind of pressure made things a little more difficult. Schauffele, though, hit a beauty, spinning it back to 2 feet and holing the putt.

It’s easy to litter a top-shots list with aces, so we largely stayed away from them. But this one by Sergio Garcia at the WGC-Dell Match Play was hard to leave off. On the fourth extra hole of sudden death against Lee Westwood, Garcia holed his tee ball from 160 yards out to advance to the Round of 16.