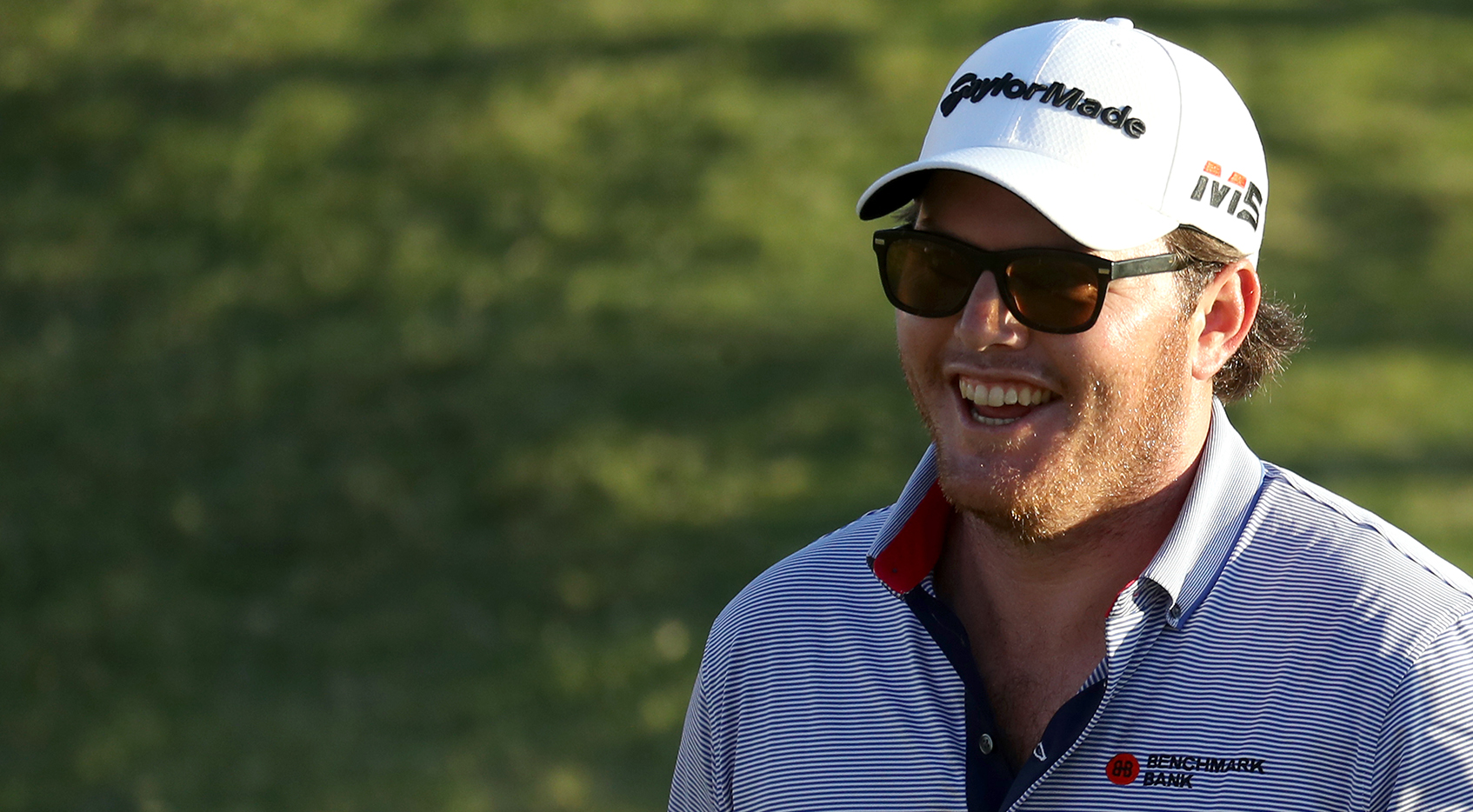 “He takes a long time walking up the range, because he has to talk to about 50 players,” laughed Higgs’ swing instructor Corey Lundberg, who has worked with Higgs since his PGA TOUR Latinoamerica days. “He doesn’t look like he’s taking it really seriously, but he really, truly does. He busts his tail. Even though the misconception is that he’s having fun and goofing off, that’s not the case.”

Fellow TOUR pro Michael Gellerman, who’s known Higgs since junior golf and frequently rooms with him on the road, has shared many post-round pizzas and cocktails with him. Gellerman said that shouldn’t cause people to question Higgs’ dedication, however.

“He likes to have fun, but he takes it as serious as anyone,” Gellerman said. “He’s very disciplined about how he gets ready for rounds, and when he’s out there, he can flip that switch pretty well.”

As a 5- or 6-year-old playing youth soccer, Higgs quickly gained his coaches’ trust for a keen sense of strategic awareness. Most of his teammates were still learning the nuances of proper positioning. Higgs served as a de facto player-coach.

“He has that competitive drive where he’s not just going to play; he’s going to study it, understand it, and he’s going to own his performance,” recalled Mike Higgs. “If you’ve ever seen young kids play soccer, they all just run for the ball. Harry understood the positions and the strategy. As they played games, he would be on the field directing his teammates as much as they played the game. ‘No, you have to go over there, because we can pass it back and forth. No, you have to be over there, so that guy can’t get it.’

“He did it to the point where his coaches nicknamed him the Colonel. The kids listened to what Harry, the Colonel, wanted to do.”

Higgs played several youth sports but gradually gravitated to golf. At age 10, he took a playing test at his family’s home course – Nicklaus GC at LionsGate outside Kansas City – for the right to play on his own.

He’d ride his bike to the course, practice and wait for a game.

“He played all the time, with any member,” said Mike Higgs. “He could play with guys that were single-digit handicaps, and guys that were 20-handicaps. It was competitive of course, but the fun side of him also learned how to engage with people of all types and of all skill levels. I think that served him well. I think he carries a lot of that forward.”

After graduating from SMU, Higgs and his parents developed a four-year plan for improvement in professional golf.

He spent his first full year (2015) on PGA TOUR Latinoamerica, by his own admission perhaps enjoying the social experience a bit too much. He finished No. 98 on the Order of Merit, then advanced to Final Stage of Korn Ferry Tour Q-School but secured just conditional status and only made two starts in 2016.

Higgs spent the majority of 2016 and 2017 on mini-tours, traveling across the United States, honing his practice routine and learning the ins and outs of being a professional.

He returned to PGA TOUR Latinoamerica in 2018, continued to build throughout the season and ultimately won the Order of Merit by $64 – earning fully-exempt Korn Ferry Tour status. The four-year plan had paid off.

“That was really the start. That was how I got better,” said Higgs of his time on PGA TOUR Latinoamerica. “I knew I was good enough to get off that tour, but saying it and doing it are completely different.

“(In 2015), that was like a traveling fraternity. That was pretty much our first year out of college. We had some fun. I was never a big partier, but I could stay out and have a few drinks … usually on a Sunday. It bleeds into travel, and you don’t prepare as well. No disrespect to PGA TOUR Latinoamerica, but I wanted to get off the Tour, so (in 2018), I figured, ‘Let’s go home, let’s get some sleep, get up in the morning, get your work done, go take a nap – usually.

“In 2015, I was too worried about being everybody’s friend. Rooting everybody else on, instead of, ‘Dude, let’s beat these guys. Let’s get off this tour.’ Week-in and week-out, I didn’t give myself the best chances to succeed. That needed to change, or else I was going to be sitting in an office and be miserable.”

Higgs grew as a professional while refusing to abandon his instinctive friendliness.

When asked for a defining memory of Higgs, Gellerman recalled the Korn Ferry Tour’s 2019 KC Golf Classic. Higgs, the hometown hero, rattled his approach off the flagstick on the 72nd hole and just missed the 10-foot birdie try, giving Gellerman a one-stroke victory.

Higgs was the first to offer congratulations.

“He came up and gave me a hug,” Gellerman said. “Both of us wanted to win, but it shows that obviously he’s a good friend too.”

But a fierce competitor lies within. As the ‘flag match’ evolved, rules dictated that the loser would pick the following year’s venue.

As Higgs built a robust schedule of junior tournaments, he grew familiar with several courses across the Kansas City region. Higgs knew the neighbor’s bread-and-butter shot was a draw, and when he lost, he’d factor that knowledge into the following year’s course selection.

“If Harry were to lose, he’d pick something where everything was dogleg right,” remembered Mike Higgs.

Higgs wanted no part of flying that Dallas Cowboys flag at his childhood home. He carries that drive to his professional career. He has won on PGA TOUR Latinoamerica and the Korn Ferry Tour, and he now eyes his first TOUR title.

“He’s always worked a lot, but I think that he’s gotten better in the last four years with how smart he works,” said Lundberg. “The quality of that practice has gotten more structured and more efficient. People see how fun-loving he is, and he certainly is that, but he also works really hard at the same time.”

“In a way, maybe we’ve got them fooled,” laughed Higgs after re-watching his ‘Dreams Challenge’ video last week. “I am serious about being good at golf. But I just happen to do it with a smile.”