Garmin Approach G8 GPS Review – Usually when I start using a full screen GPS my initial reaction is to wish it was as quick and responsive as my smartphone. So it was a pleasant surprise for me when I picked up Garmin Approach G8. 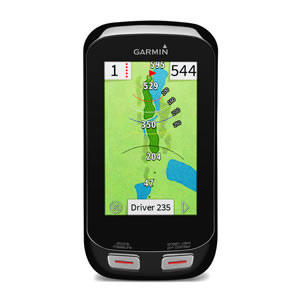 Turn it on using the power button on the side of the slim 1.3cm device, press Play on the screen and the Approach G8 finds the course you are playing with the whole process from start to finish taking under 30 seconds, which is seriously impressive.

The 3.9 x 6.5cm screen is a good size, reasonably responsive to touch and the graphics are bright, even if they do look a little low tech. However the clarity is good and on the hole overview screen you can see the distances to hazards and the front, middle and back yardages of the green.

Touching the top right icon on the screen brings up the larger numbers for front/middle/back yardages and this is much clearer to read from a distance.

Most of the controls are via the touch screen, but the Approach G8 also makes good use of the two navigation buttons below the screen and this actually helps the usability.

Clicking the bottom right button brings up the green view so you can see the green shape more clearly. You can also drag the flag around and the front and back yardages change to reflect the new position, which is handy if the flag is tucked in a shallower part of the green.

The flag also stays ‘above’ your finger as you move around the screen so you can see what you are doing, which is a nice touch.

The other button in the bottom left brings up the scoring screen that can track up to 4 players. You just click the number of shots you have taken which is much quicker to hit 6 than scrolling up two for a double bogey all the time.

It keeps your score to par if you miss a hole, but if you want an actual total you do need to enter a score for every hole, which can be annoying if you make a lot of pars, as defaulting to a par unless told otherwise would be more user friendly.

If you push the Power button once to go into settings, you can also enable stats for missed fairways and putts and this is then included in your end of round analysis. This then turns the strokes scoring to a scrolling method, but I guess you can’t have it all.

Also in settings are some useful features, some of which are competition legal and some that aren’t.

In Club Advice, you enter the yardages for the clubs you use and then the Approach G8 will suggest clubs back to you on the bottom of the screen depending on the yardage.

I doubt that is illegal, but the PlaysLike adjusted yardage for elevation certainly is and it can be disabled. Garmin will have taken the information from the maps they used to create the courses to build in the elevation. If the flag is say 90 yards uphill it will have another figure next to it with an up arrow saying 93 yards as the effective yardage left.

Having used this in practice rounds, it is a good feature, but I would not say it is gospel as some elevation changes on the course I was playing were not picked up, so use with caution.

The Lay Up function shown above is also very useful as you touch the screen on the hole overview to bring up a target to slide around the screen to get your preferred lay up distance.

The Pin Pointer comes in handy if you are blocked out and can’t see the hole as it points to the middle of the green. As you can also see the hazards around the green you could fire away without needing to go and visually check what you are doing. Just make sure the people in front are out of the way first.

In the box with the Garmin Approach G8 is a USB charging cable, AC adapter and a karabiner clip, but nothing to attach it to.

The Approach G8 is small enough to go in your pocket, but the universal bag mount is better and allows you to clip it on to your bag. However it is a little cheeky to charge £23 extra for it from the Garmin website when other brands include it for free.

The short fabric loop on the back of the bag mount that the karabiner goes through looks robust enough, although if you are carrying I am not sure I would want the GPS swinging around all the time.

The Approach G8 is charged via a standard mini USB cable that is inserted into the rear of the device behind a rather odd shaped rubber protective flap that does the job, but I worry about its longevity.

Garmin is one of the leading brands in all sports for GPS so it is no surprise that they have got this updating malarkey right. As you may have seen in my Garmin Approach S6 GPS watch review, the Garmin Connect service uses an app on your smartphone to upload scores and download updates via Bluetooth.

In addition it also has built in WiFi to connect to any wireless internet network and the download speed is good. This is a great feature and means that you don’t need a PC anymore to manage your device, which is a godsend if you are out and about on a golfing trip or just don’t have one anymore.

Once the G8 is connected to your smartphone it will also show you notifications of emails, texts and calls on the screen, so if you have to keep an eye on the rest of the world when you are playing then you can do so.

The online scoring analysis in the app is better than on the G8 and allows you to see how you are doing over time. Despite the fact that I said you don’t need to use one, viewing the analysis via the Garmin Connect website on a larger screen computer is quicker and easier to digest than the app. Bear in mind that once your scores are uploaded from the G8 then it is not possible to edit them.

All in all I think Garmin has got it cracked with the Approach G8. It does everything you want from a GPS, plus the WiFi and Bluetooth connectivity make updating the device and uploading scores simple, quick and easy.

The speed it starts up and finds your golf course is fantastic and everything else it does quickly with clarity in one of the best looking handheld GPS device around.

So go locate yours now.