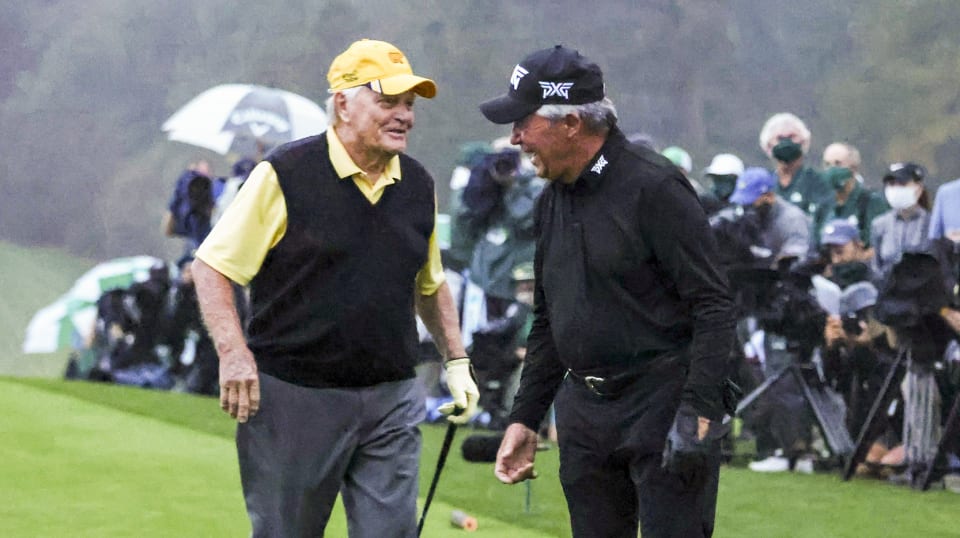 Nicklaus (six Green Jackets) and Player (three) touched on a wide range of topics that included:

Health
– Nicklaus said his back has been so bad, he can no longer go on walks
but has been walking in the pool with Barbara. And Player, to no one’s
surprise, said, “I started exercising and weight-training in 1944,” a
time, he added, when the only exercise most other golfers did was
“taking an olive from one martini to the other.”

Equipment and the modern golfer
– Both players have been alarmed at the distances the ball is flying
and are worried for Augusta National when players are reaching par-5s
with short irons. Player counts himself as a big fan of Bryson
DeChambeau, whom he considers very smart. “People say, ‘Here comes the
scientist, here comes the kook,’” Player said. “Well, he is a scientist,
and he’s taken it to another level.”

The pandemic –
Nicklaus said he and Barbara recently had dinner with Rickie Fowler and
his wife, and Fowler discussed COVID-19. Nicklaus also commented on the
robust health of the game when so many people have been looking for
something to do in a safe and socially distant manner. “It’s brought the
game of golf back to people who hadn’t been playing,” he said.

Family
– Player said he’d traveled to Philadelphia at the outset of the
pandemic and had planned to visit his daughter for three days. He stayed
eight months. “The price was right,” he said.

Nicklaus’ caddie
for the ceremonial shot was his wife Barbara. “I normally have one of
the grandkids, but we couldn’t bring anybody with us except for the
spouses this time,” he said, adding that Barbara took some convincing
before she agreed to the job.

Tiger Woods – Both players commented on Woods’ eloquence at the Champions’ Dinner.

“It
was very heartwarming listening to him speak,” Player said. “He said he
was on the way to the golf course and he had to stop because he had
tears in his eyes and paused for a little while on the road because a
lot of memories were going through his mind very quickly, as I
interpreted what he was saying, and to have won the tournament again
with his children there.

“He paused for a while and he spoke very, very well,” Player added.

Charlie Woods
– Nicklaus remarked on how proud Woods is of his son, who has begun to
make a name for himself on the South Florida junior golf scene at 11.

“He
says, ‘I’m having more fun out with Charlie and Sam, his kids, and
watching them do different things and be vulnerable,’” Nicklaus said.
“He says, ‘Charlie is starting to play golf and he’s getting a really
good swing.’ He says, ‘I’ve got blades in his hands so he learns how to
play golf instead of learning with all those forgiving golf clubs.’ I
think he’s very wise. That’s what his father did to him, he took the old
equipment we played with to teach Tiger. I think that’s why Tiger was
such a good player.”

The career Grand Slam – Asked what
advice they would give Rory McIlroy as he tries for the career Slam this
week, Nicklaus said it would be the same advice as always: Be patient.

Player
preached self-belief. “I did a lot of yoga and mindset and sort of
almost brainwashing,” he said. “I did some very extraordinary things,
which I won’t go into, in my room to do it and a lot of mindset, and I
teed off believing and this is what I believe Rory has got to do.

“…
A lot of players tell you they believe,” he continued, “and when that
bell rings and they get on that tee, there’s something that they don’t
believe, and I think he’s got to get up there and say – he’s got to
start meditating. He’s got to start believing that he can do it, because
time goes by.”