GolfBuddy aim W11 GPS Watch Review – For many golfers these days, having access to technology on the golf course to aid their decision making can be just as important as the 14 clubs in the bag, as we all look to make the game easier for ourselves. 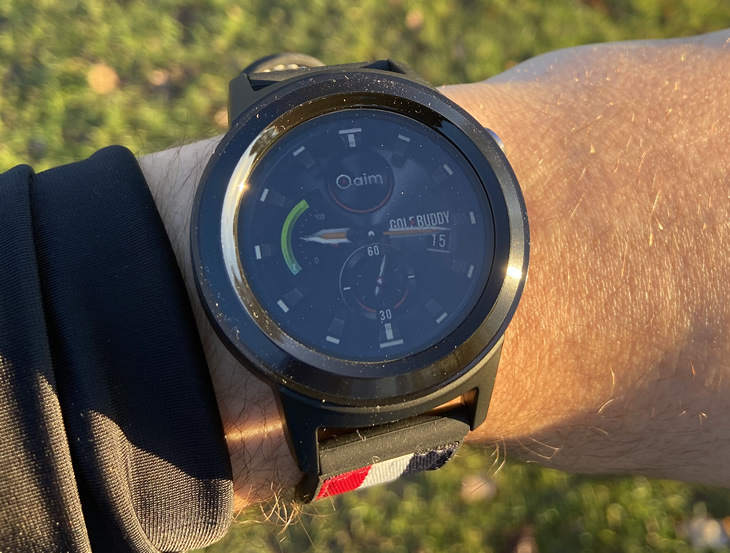 GolfBuddy’s range of watches, GPS devices and rangefinders make them one of the most popular options in the UK when it comes to buying golf tech. We got our hands on the new aim W11 GPS Watch, which contains a few new features and promises extra-long battery life, to see how it performed…

The aim W11 replaces the aim W10, which makes sense, and is said to be Golf Buddy’s most advanced GPS watch to date thanks to a whole host of features designed to give you a clear view and more control on the golf course.

A 1.3″ full colour TFT-LCD touchscreen display shows you all of the necessary course information in plenty of detail, including distances to the front/centre/back of the green, hazards, pin placement and hole layout.

There’s a zoom function which allows you to get a closer look around the green as well as picking out potential landing points from the tee thanks to the arced distance readings.

GolfBuddy has added a new shot distance measurement feature, allowing you to track the yardage of every shot you hit with precision.

The device weighs just 50g, ensuring that it does not hinder your golf swing, and comes with a choice of two different straps – black or red, white and blue.

There are 40,000 golf courses pre-loaded, with automatic course and hole detection software allowing you to focus on your golf without constantly fiddling with the watch.

Free wireless course updates are available via bluetooth within the smartphone app, which can be used to cast yardages and other features from your watch to your mobile device.

The aim W11 is designed to be heavy rain proof, meaning that it is suitable for use in all conditions, and you can choose to personalise the look of your watch by selecting from the wide array of interchangeable watch faces.

The digital scorecard allows you to keep track of your scores during your round, whilst the watch boasts a 13 hour battery life which should give you enough juice for three rounds of golf without having to recharge.

When it comes to technology, I think most of us would admit that we are pretty impatient. We don’t want to sit and read through manuals or run through fiddly menus before our new device is set up and ready to use, we just want to turn it on and get going.

That’s exactly what the aim W11 GPS did.

I turned the watch on upon arrival at the golf course, and within 60 seconds the golf course was found and the hole details were being shown. It was seriously impressive and just what I want with a device like this – you want it to work in the background rather than be a distraction when you’re trying to enjoy your golf.

The watch itself has a large, clear touchscreen which feels responsive and is easy to navigate through the different screens. It’s a little bulkier than I would ideally like, so I’d only really consider using it for golf and not everyday life.

Having said that, there are a range of smart looking watch faces available if you’d rather keep wearing it even when you aren’t playing.

The watch also features a new ceramic bezel which is a step-up in terms of look versus the aim w10, giving it the appearance of a standard smart watch rather than just a golf-specific one.

I tested the watch with the red, blue and white strap which was already fitted to the device when it arrived. This wasn’t really to my taste, but GolfBuddy also include a plain black strap with white stitching in the box so you can decide which you can prefer.

After teeing off and following my ball down the fairway (a rare occurance) I could see that the watch was constantly updating the yardages as I moved, and the watch also updates front, middle and back yardages to be accurate wherever you are on the hole, even if your angle has changed.

Swiping across the watch brings up the different views available to you during the round, including the hole view with yardage arcs placed on top to give you an idea of distances off the tee, and it should also help you out if you’re looking for a layup point on longer holes.

Obviously this is quite small on a watch, but you can zoom in and out here if you want to get a closer look, and I found the touchscreen to be nice and responsive which made things a bit easier.

There’s also a single screen which shows the distance to reach all of the hazards for your chosen hole.

Ideally this would tell you distances to reach a hazard and to carry it, so that you’d know where it was worth trying to carry a water hazard from the tee for example, but it’s still a useful overview anyway.

The device also switches hole automatically for you, which makes life a bit easier for you as you walk from the green to the next tee.

Of course there may be times where you want to switch to a different hole, or if the device gets confused by just how far off line you’ve managed to hit your tee shot, so you can always switch holes manually too.

As I mentioned earlier the aim W11 is quite chunky, so if you’re not used to wearing a watch then this might take a bit of getting used to, although it was lightweight at 50g so it wasn’t too much of a burden whilst swinging.

One of the new features added to the aim W11 is the shot distance measurement, which allows you to get an idea of how far you really hit your clubs out on the golf course and is perfect for adding to the excitement when you catch a driver out of the screws.

You can use the GolfBuddy app to connect your device and access course updates, as well as casting yardages from your watch to a smartphone or tablet.

This is a clever feature, although to be honest I’m struggling to see why you’d really need it because it’s presumably easier to just look at your wrist rather than having to get your phone out.

GolfBuddy claimed that the watch provides you with 13 hours of battery life, and having played two full rounds of golf whilst wearing the watch, I still had around 50% of battery left. Very impressive.

When you do come to charge the device, there’s a cap which you place on the back of the watch that acts as a charging dock, from which you can plug in the USB.

With an RRP of £249.99 the aim W11 isn’t cheap, occupying the same kind of bracket as the likes of Garmin and SkyCaddie when it comes to GPS watches.

The GolfBuddy is more than able to compete, thanks to its straightforward setup and pairing process, the excellent on-screen graphics, responsive touchscreen and standout battery life.

It’s a little bit bigger than I would really want from a watch in an ideal world, especially when compared to the likes of a Shot Scope or a Garmin.

The watch is also capable of slope calculation and green undulation, although not yet in the UK, and I think that the addition of these would take the device to the next level in terms of usability.

After switching to the black wrist strap, if I could get used to the size of the watch then yes I would, because I was really impressed with the usability and the quality of the screen.

GolfBuddy have been one of the big names in this market for quite some time, and it’s easy to see why with the aim W11.