GolfBuddy LD2 GPS Watch Review – Being a bloke you may think I would hardly be the right choice to review the GolfBuddy LD2 ladies’ GPS watch, so I have involved several golfing members of the fairer sex to assist me. 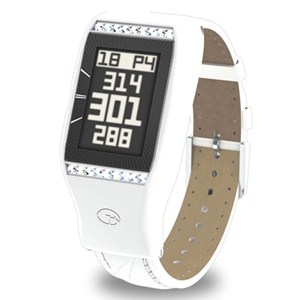 Underneath the glitz and glamour the LD2 is a standard issue GolfBuddy GPS, but in a lighter 28g body that is around half the width of the men’s GolfBuddy watches.

It shows front, middle and back yardages well on a single screen and from start up found the correct course from its 40,000 database within in a minute or so.

The display is compact at 1.8 x 2.7cm and the quality of the LCD screen could be a little sharper.

You can scroll between holes by using the up or down white buttons and access hazard information by pushing the silver centre button.

This then shows you a number above the image for the distance to the front of the hazard and if you push the lower button you see the yardage to the back. Unless you like clicking buttons, it would a better user experience to show both front and back above and below the image.

Keep pushing the lower button to scroll through the hazards from nearest to furthest and hope you are not playing a course with a lot of bunkers.

Note that all the buttons are on the left of the device, which means that if you are a right handed golfer and wear the LD2 on your left hand then they won’t affect the back of your hand during the swing. This is a nice touch I have only seen before on some up market golf watches.

There is also a shot measurement function that enables you to mark two shots at the same time, so you can measure your drive and approach shot.

Once on this screen, just use the top white button to start and stop the measurement of your first shot and then the same thing for the second shot using the lower white button. This is excellent and one of the simplest and most functional shot measurement set ups I can remember seeing.

The LD2 comes with its own USB charging cable for you to plug into a computer or the mains, but you will need your own adaptor.

There is also an odometer if you want to see how far and how quickly you walk or run when you are not playing golf and of course the LD2 multi-tasks by telling the time too.

So technically, as a functional GPS the LD2 passes, as the information and menu structure are all pretty user friendly, which is a strength of most GolfBuddy products.

Taking the LD2 around lady golfers of various ages and abilities and I was pleasantly surprised when I met the local ladies’ golf team as to how many of them use a GPS watch.

The size of the LD2 was a bit hit as most other GPS watches are large round things, some of which already look big on male wrists and positively huge on your average lady. It was felt to be little tall, but it is no more so than most other GPS as it has to include the antenna to make it all work.

The view on the fonts varied with most preferring the minimalist retro look of the digital display.

The white leather strap came in for a lot of praise as it was comfortable and added a little bit of style. Some felt that with the LD2 being all white it blended in to look like an extension of their glove, whilst others would be happier with the usual rubber strap.

The key benefit was the weight as everyone liked how light it was and some remarked that they did not feel they were wearing a watch at all.

This then brought us on to Swarovski crystals on the face. Hard to believe when it comes to female opinions on fashion, but they were split 50/50 on this with some loving the style and others thinking it was a bit bling.

Bear in mind GolfBuddy are a South Korean company, so maybe this will appeal more to ladies in the Far East than the UK.

Overall the results from the female jury were that the concept of a light smaller GPS for women golfers got douze points.

The strap and crystals both gave it a distinctive look with the former universally liked and the latter splitting opinion. Anyone thinking of passing off a technology present as a piece of jewellery for the lady golfer in their life should subtly check if the LD2 crystals will create a sparkle in her eye.

The LD2 is GolfBuddy’s most expensive GPS watch and in the female market, most said that they might not spend nearly £200 as they just want a simple device without too many bells and whistles.

However money aside, the fact that there is a smaller, lighter GPS watch aimed specifically at lady golfers is a credit to GolfBuddy and so the LD2 certainly wins this vote.