GolfBuddy LR3 Laser Review – Now you may wonder why GolfBuddy, who are predominantly a GPS device company, would want to bring out a laser distance measuring device. 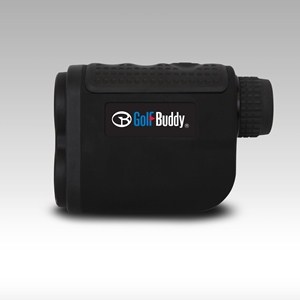 I put this question to the Korean founder Harry Jung at the 2014 PGA Show in Orlando and his answer was that there are golfers who prefer to use lasers and he wants to serve them and be the best in the market.

GPS devices with large screens really come into their own on courses you don’t know well or are playing for he first time.

If you know the course well and then a simple front/middle/back GPS combined with a laser for precise yardages to the flag is my preferred way to go and now GolfBuddy has a foot in both camps with the LR3 Laser.

Lasers also have the benefits of not needing to update a database of courses or recharging as they run on batteries. Combine the GolfBuddy LR3 laser with their Voice+ or their GPS watch and you have the best of both worlds.

So that is why GolfBuddy have one and here is why you should consider it.

Firstly the GolfBuddy LR3 laser is compact and light at only 215 grams. It fits easily in your hand and has a nice grip section on top, although I do worry that it has not got a shock proof exterior, as like me, many of you will be prone dropping things on hard surfaces. Grass is fine, golf car parks or trolley paths are not.

However GolfBuddy say it is dust and water resistant so it should be durable enough if you use it sensibly. It also has a generous carry pouch to clip on to your bag so to help it survive transit.

Using it is very simple. You just point at the target and click the button and you get the yardage instantly. It does this very easily and seemed accurate to within the 1 yard margin for error that these things have.

As well as normal mode for getting a distance to what you are aiming at, there is Scan mode for viewing multiple targets in one movement as you pan across the green and Pin mode for picking out the nearest target you are aiming at and all of them worked well. The eyepiece also has an adjustable focus for those who wear glasses.

When you look through the 6x zoom viewfinder, the crosshairs used for aiming are in the form of a rectangular box with a small circle and it is easy to pick out the target. The yardage is shown above the crosshairs in metres or yards and even though the numbers are clear, they are a little smaller than other lasers I have used.

What I liked best about the LR3 laser was that it was very good at picking out the flag at over 200 yards. The crosshairs seem bigger, but it also seems that the target you are aiming with is bigger too, so it was better at getting these long distance targets than other brands.

After 10 seconds the LR3 switches off automatically so it saves the battery life, which will last numerous rounds anyway. There is a battery indicator on the display to tell you when you need to replace the CR2 3v lithium battery.

You will need a coin or screwdriver to open the battery compartment which is frustrating when you have to do it, but at least the battery is less like to come out inadvertently whilst you are on the course, which has happened to me with other models.

In summary, the GolfBuddy LR3 is simple to use and it picks up the targets very easily. It is well made and good value for money so if you want an easy to use point and shoot laser then set your sights on the GolfBuddy LR3 laser.