GolfBuddy WT3 GPS Watch Review – Having moved into the world of smaller GPS devices with the excellent GolfBuddy Voice+ it is no surprise that GolfBuddy would launch a watch in the form of the WT3. 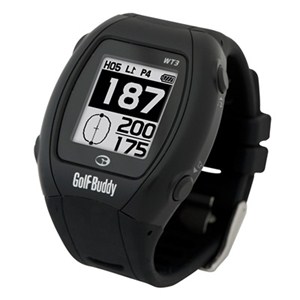 For wearing on your wrist, the WT3 is a much better alternative to the Voice+ and its silicon strap, as it looks like it is meant to be a watch. When you start up the WT3 it automatically sets the time and date from the GPS signal and in Time mode it shows sunrise and sunset times, which is fun to know.

However it is quite a big watch with a tall face and a deep body to accomodate all that GPS wizardry. It looks a lot more bulky on your wrist than some other makes that are also more stylish when you wear them off course.

The size of the WT3 makes you look a bit like a Bond villian about to launch some anti-personnel device at your opponent from your wrist, which could have its uses.That option has unfortunately been overlooked in favour of a GPS watch that is actually lighter and a lot more comfortable and unobtrusive to wear when playing golf than it looks.

The numbers on the display are large and clear and the watch picked up which course I was on quickly and easily. Changing between holes was also very easy through clicking the right hand buttons to go up and down the holes.

On the home screen, below the yardage to the middle of the green, you have the option to show either the front/back yardages, distance walked or the time. The GPS tracking of time and distance for the round is a nice touch and can be used independently if you want to track how far you walk off the course too.

The Dynamic Green View adjusts the yardages to the angle at which you are approaching the green worked well, although I first tried it out on Muirfeld and the 2nd green was lengthened last year for the Open, but the new information had not been added and there does not seem to be a way to update the 36,000 course database on the WT3.

The WT3 only shows yardages for front, middle and back on the same screen, but clicking the top right button will also show distances to hazards such as bunkers, water, trees, dog-legs, out of bounds and even caves, according to the manual.

The distances to the hazards are good to have as normally you need a large screen GPS for this. However if there are a lot of hazards then you have to visually work out which one is which and then there is only one distance to reach them and not to carry them. It is a useful feature, but for better information on hazards then you will have to invest more into a larger screen device.

The same goes for the Moveable Pin Technology for distances to certain flag positions, which is buried in the navigation menu and is a little cumbersome to use. All it offers is a choice of scrolling through pre-defined positions scattered around the image of the green, so it is still just more of a guide than a genuine measurement of exact distances to the flag.

Instead I found myself combining the WT4 with the GolfBuddy LR3 Laser for accurate distances to the front and back of the green and the flag too.

GolfBuddy say that the WT3 will hold enough charge to last 8 hours in GPS mode, but I feel that 2 rounds in the same day might be its limit. The 300mAh battery does charge quickly in around an hour and a half using a special charging cradle attached to a USB cable, but an adaptor for plugging into the mains is not supplied.

The charging cradle is also a little clunky in design and took me a few goes to get the hang of inserting the watch as it holds it quite firmly, which I suppose is a good thing.

Overall the WT3 is a functional GPS watch that does everything clearly and very well, even if it is in need of a fashion makeover from Gok Wan. GolfBuddy products feature clear navigation, good features without the need for a subscription fee and the WT3 certainly continues this tradition.

For all these reasons I would like to recommend the WT3, but with other sleeker models in the market and the Gok-Wan-ified GolfBuddy WT4 GPS watch due out later in 2014, then the beautiful people among us should turn the other cheek.