AUGUSTA, Ga. – The LPGA legends were at lunch Friday when they were informed of the order in which they’ll strike their ceremonial tee balls on Saturday at Augusta National.

“We almost lost it,” said Nancy Lopez, who will hit third, after Se Ri Pak and Lorena Ochoa, and before Annika Sorenstam, who will tee off last.

There are 20 combined major-championship victories among the four legends. But when they step on the first tee Saturday morning, before one of the biggest days in women’s amateur golf history, it will likely be hard for them to contain their emotions.

“I will confess, I will be a little nervous,” Lopez said. “I probably won’t sleep, either. But it’s just exciting to be a part of history. Tomorrow will be a day of history for us, for the amateurs that are here and for Augusta National.”

Pak is honored to lead off but also admits, “It’s the first time in a long time that I’ll be nervous.”

Of course, it doesn’t help that Pak forgot her golf clubs. She plans to decide on the tee which of the three other starters’ drivers she’ll use, so when the potential of a long-drive contest came up, Sorenstam quipped to Pak, “You can borrow my 3-wood.”

Sorenstam and Ochoa are likely the favorites to hit the longest tee shot, though it won’t stop the 62-year-old Lopez from giving it her best lash.

“Even though I realistically probably can’t, I’m going to try,” Lopez said.

“Maybe tomorrow we can continue and play,” Ochoa chimed in.

Though all four concede they want no part of the 30 players who made the cut and will compete for the inaugural title on Saturday.

“Maybe if we played a scramble,” Lopez said. “We’d do very well.”

Sitting back and watching the final round unfold won’t be too bad, either.

“We all care about the game and women’s golf,” Sorenstam said. “This has a huge potential to not just inspire young girls, but golfers, other women in sports and women in business.”

Sorenstam added: “It’s so exciting to see [the players] and talking to them after their rounds, the smiles are up to their ear, all of them. They can’t stop smiling and it’s a dream come true. I’m so happy for them.

“What a cool experience, to come here and just to get a chance to experience it, because many of them have not been here. This is golf, and it’s what you dream about.” 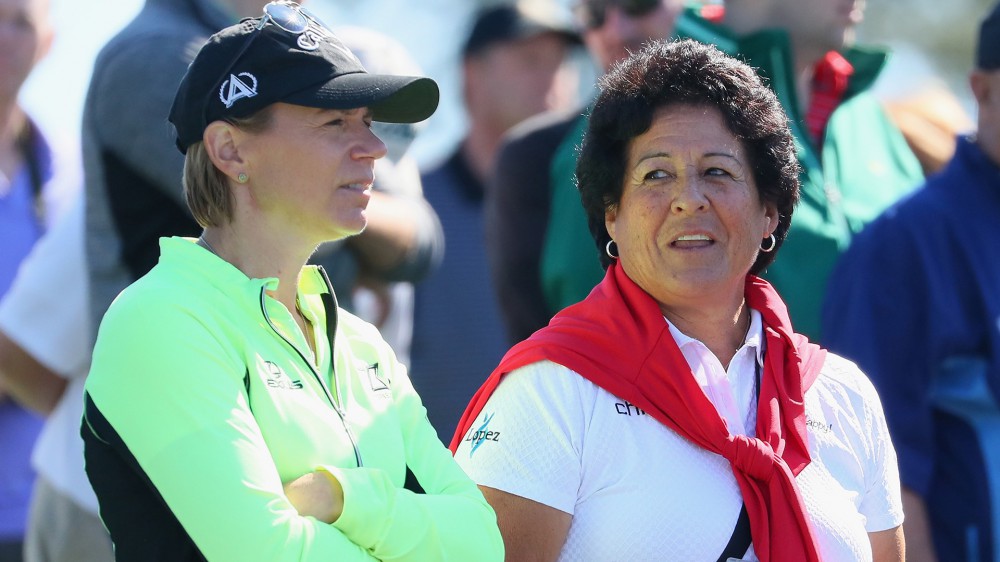