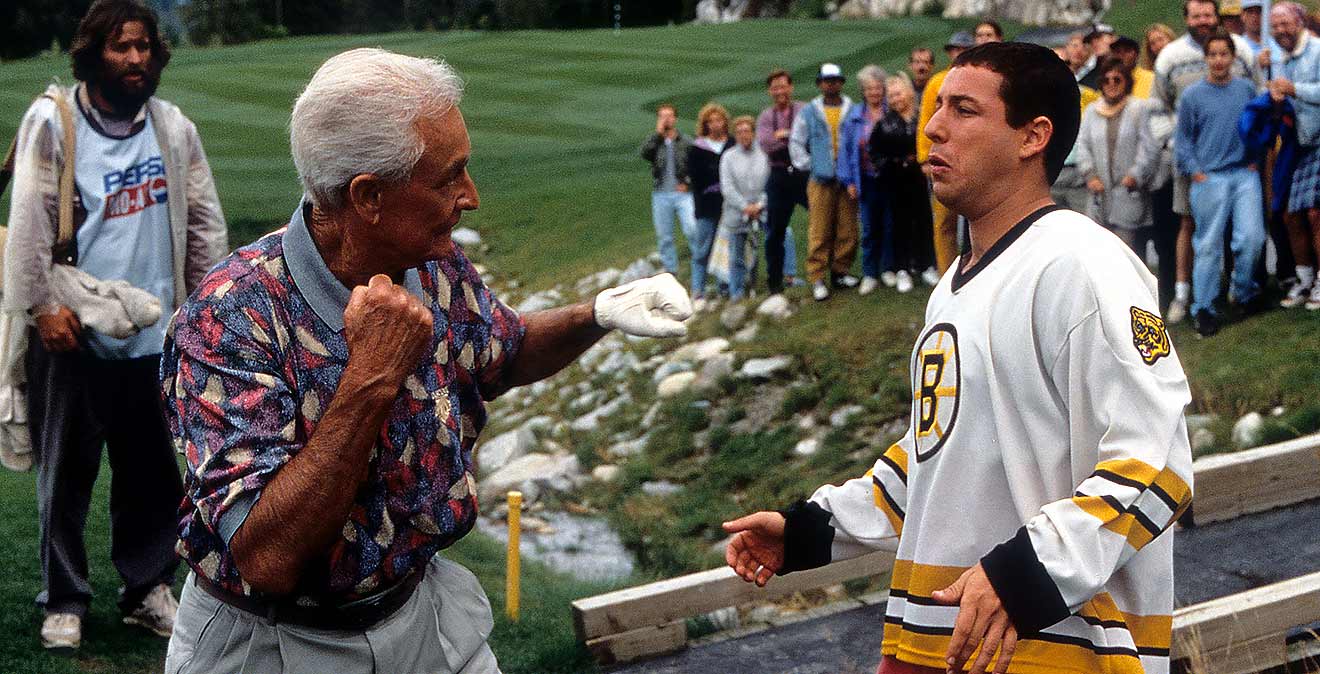 We can all agree that Caddyshack is the quintessential golf comedy, right?

Released in 1980, Caddyshack mocked the stuffy environment of country clubs and its members, allowing Saturday Night Live alums Chevy Chase and Bill Murray free rein at the height of their comedic powers. Golfers routinely recite lines from the movie, and Murray’s assistant greenskeeper Carl Spackler has carved out a special place in golf lore.

But for young golfers today, their first exposure to a wacky golf movie was not Caddyshack but “Happy Gilmore,” which came out 16 years later and was made by another SNL alum in Sandler. Instead of making fun of country clubs, it mocked professional golf – which certainly hit home to those who hoped to make their living on the PGA TOUR. And instead of Spackler’s Cinderella story, it gave us Happy’s much-imitated running-start tee shot.

Asked which movie he prefers, 31-year-old Jonas Blixt responds, “Happy Gilmore, but I like Caddyshack too. The older guys probably will go more with Caddyshack.”

Adds 32-year-old Marc Leishman: “I didn’t actually see Caddyshack until about five years ago, so I prefer Happy Gilmore. I love it.” Patrick Rodgers, 23, says Happy Gilmore and Tin Cup are his two favorite golf movies. No mention of Caddyshack.

Longtime golf announcer Verne Lundquist, who plays himself in the movie, told The Sherman Report that the movie has “helped keep me relevant to a generation, maybe even two. I get more questions about Happy Gilmore than I do about the game.”

Lundquist recalled the time he and Billy Packer were scheduled to call a basketball game at the University of North Carolina in 2009. Lundquist was asked to visit the locker room and address the home team; he replied that they surely wanted Packer. No, it was Lundquist they wanted – and Tyler Hansbrough, then a star for the Tar Heels, told him why: “We need you to say, ‘Who the hell is Happy Gilmore?”

It was a line from the movie. Lundquist obliged – and the players went crazy.

“I said, ‘If you guys win the national championship, I expect to get credit for giving you a motivational speech,’” Lundquist told The Sherman Report. “They won, but I never got any credit.”

While Happy Gilmore may speak more to millennials, older golfers still seem to prefer the classic. Zach Johnson, 16 years older than Rodgers, puts Happy Gilmore in his top five among golf movies but not at the top. “We all know what No. 1 is,” he said. “Caddyshack.”

Eight-time TOUR winner Geoff Ogilvy, 38, used to be able to quote Caddyshack from start to finish. He’s never been able to do that with Happy Gilmore.

“I was truly a Caddyshack junkie,” Ogilvy says, “but not really a Happy Gilmore junkie.”

It’s safe to suggest that Murray and Chase (along with Rodney Dangerfield and Ted Knight) have a broader, more approachable appeal than Sandler, who can be an acquired taste for some.

Lye was one of those who didn’t always get Sandler’s kind of humor; in fact, he gravitated more to the subtle humor of Sandler’s nemesis, Shooter McGavin (played by Christopher McDonald). But as he worked on the movie – he was close friends with the father of producer Robert Simonds – Lye began to appreciate what Sandler brought to the table.

Lye remembers the first day he showed up on set in Vancouver, British Columbia (due to the conversion rate, it was cheaper to film movies in Canada than in the United States). It was early in the morning, about 5:30 a.m., and Lye was escorted to his trailer. The trailer next door had loud acid rock music blaring. He asked what was going on.

“That’s Adam Sandler’s trailer,” he was told. “That’s how he gets fired up in the morning.”

Today, when asked about Sandler, Lye says “He was a meek guy, but as soon as the cameras came on, he became a beast. It was like Gremlins — just feed him after midnight. A cute little guy off the set but hilarious on it.”