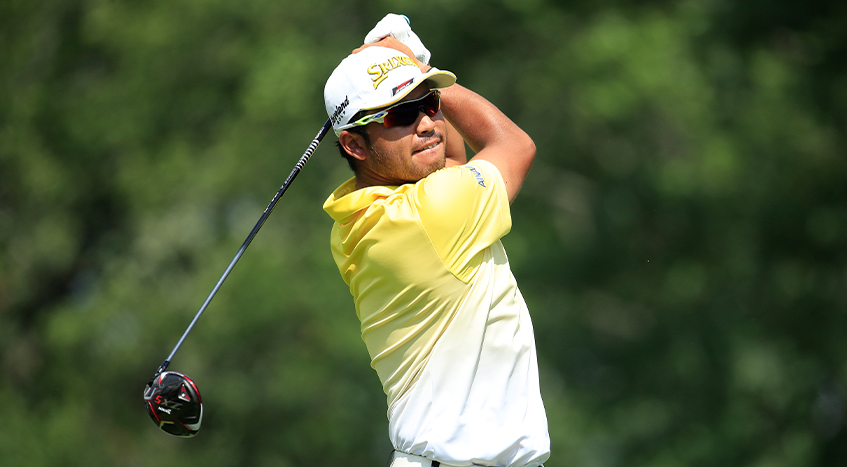 OLYMPIA FIELDS, Ill. – One of the toughest tests of the year made it clear that par would be a great score at Olympia Fields. Leave it to Hideki Matsuyama to make a 65-foot birdie putt on his final hole Thursday to lead the BMW Championship.

Matsuyama, the Japanese player who has gone three years since his last victory, birdied two of his last three holes for a 3-under 67, one of only three rounds under par on a course that was long, tough, firm, fast and nothing like the last two weeks.

Tyler Duncan, just outside the top 30 as he tries to earn his first trip to the TOUR Championship, made an 8-foot par putt on his last hole for a 68. Mackenzie Hughes, one of only four players who reached 3 under at any point in his round, was another shot behind.

“I’m not sure really what I had going today, but that last putt, the long putt that went in, very happy with that one,” Matsuyama said. “So we’ll remember that one.”

Dustin Johnson, who won THE NORTHERN TRUST last week at 30-under par, opened with a 71 and felt like it was a good day’s work. He was told that even three straight rounds of 60 would not be enough to reach 30 under at Olympia Fields.

By a landslide, no doubt.

Tiger Woods needs to finish around fourth to have any hope of returning to East Lake next week in Atlanta to chase the $15 million bonus for the FedExCup winner. He was hovering around even par a few shots out of the lead. He finished with three straight bogeys for a 73 and was running hotter than the weather.

A three-time U.S. Open champion, Woods knows all about control and patience and key pars putts. And then he let a reasonable round get away from him.

“The course was fine. The course is in perfect shape. Not the way I wanted to finish,” Woods said in brief comments.

The average score was 72.8, and only four of the 18 holes played under par. That included both par 5s. This is what the U.S. Open could have used in 2003, instead of rain-softened conditions. It was hot in the morning, baking out a dry course. The rough is 5 inches in spots. The greens were hard, making it tough to get the ball close and nearly impossible to get shots to stop on the green from out of the rough.

“I think when golf courses become like this and pars are a premium, I think I’m almost more comfortable at times because you don’t feel like you’ll ever get left behind when you’re running off a few pars in a row,” Hughes said. “Like last week, if you got off to a slow start and you were even par through six holes you felt like you were getting run over.”

Rory McIlroy was among 10 players who finished at 70 and felt the day was a success. He hasn’t registered a top 10 since golf returned from the coronavirus shutdown in June, and he conceded to being lethargic without fan energy.

“I said last week if you need someone to shoot between like even par and 2 under, I’m your man,” McIlroy said. “So I’m loving these conditions. It’s sort of weird. The way my game feels at the minute, it’s just as easy for me to shoot even par here as it was last week in Boston, for whatever reason that is.

“But this is proper golf,” he said. “You’ve really got to think about stuff. … It’s nice to play a round of golf like that again.”

Also in that group at even par was Carlos Ortiz of Mexico, notable because he was the latest player to be grouped with Woods for the first time. He raved about how Woods controls the flight of his irons. He missed out on the massive crowd because there are no spectators, only carts carrying the broadcast crew.

“It’s probably the least amount of people he’s played in front of,” Ortiz said, “and the most for me.”