Tiger Woods entered the final round of the Masters just two shots off Francesco Molinari’s lead, and thanks to a final-round 70, he walked off Augusta National’s 18th hole with his 15th major title – and first in 11 years.

After starting with routine pars at the first and second hole, Tiger got under par for the first time on No. 3, holing an 8-footer for birdie.

Woods gave two shots back on the next two holes, carding back-to-back bogeys at Nos. 4 and 5 (his fourth bogey of the week at No. 5) but the disappointment was short-lived.

Woods hit a dart to 2 feet to set up a birdie on the seventh hole, and then followed it up with another birdie on the par-5 eighth hole by sinking a 7-foot putt. That got him to 12 under and within a shot of the lead, still held by Molinari.

Tiger then found the green with his approach on the ninth – 70 feet from the hole. But Woods nearly holed the putt, lagging one to about a foot and tapping in for par to close out a first-nine 35.

Woods gave another shot back with a bogey at the par-4 10th hole, and then was in danger off the tee on No. 11 before hitting this dart from the trees to 29 feet and two putting for par.

Woods was able to tie the lead for the first time on Sunday on the par-3 12th hole, hitting his tee shot to 50 feet and two-putting for par while Molinari found the water off the tee and made a double-bogey 5.

Woods went on to take the solo lead with a birdie on par-5 15th hole while Molinari made his second double bogey of the second nine, and he increased his lead to two strokes with a birdie at the par-3 16th hole after hitting his tee shot to four feet.

After a par on 17, Woods took the traditional walk down 18 as he was cheered on by the patrons with a two-shot lead, and he finished with a bogey to win his first major since 2008. 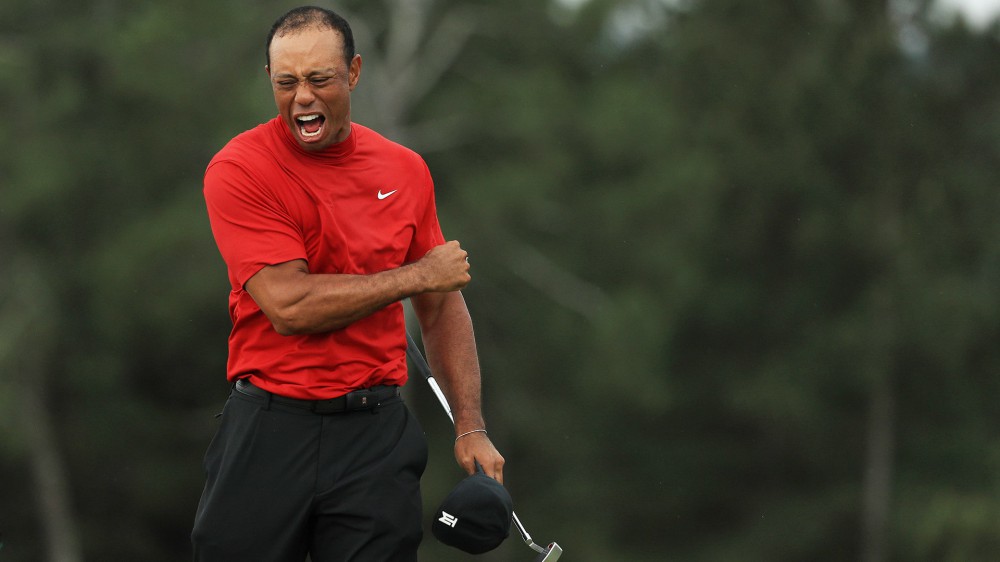 Three share lead at DP World Tour Championship after Round 3