Tiger Woods will enter the final round of the Valspar Championship one off the lead held by Corey Conners, following a Saturday round of 4-under 67 at Innisbrook.

Woods sits in a three-way tie for second at 8 under par with Justin Rose and Brandt Snedeker. Rose will play in the final pairing with Conners on Sunday, while Woods and Snedeker go off in the second-to-last tee time for the second day in a row.

“The environment was incredible,” Woods told Golf Channel’s Steve Sands in a post-round interview. “The people were into it. I played well, Sneds played well, and the people, I think they really got entertained today.

“I’ve played myself right up there in contention so it’ll be a fun Sunday.”

Two off the lead to start his third round Saturday, Woods missed a birdie try at the par-5 opening hole, but wouldn’t have to wait long to move into red figures.

Tiger made his first birdie of the day at the par-4 third, taking iron off the tee and playing another from the rough before rolling in a 20-footer.

Two holes later, he split the split the fairway at the par-5 fifth, flew his second shot just over the green, and got a pitch from the thick stuff to stop in short order, setting up a tap-in four.

Tiger Woods' 321-yard drive sets up a birdie on No. 5.#QuickHits pic.twitter.com/UiQnuvkV5d

Following pars at Nos. 6, 7, 8, Woods closed out a 3-under front nine with this chip-in birdie to tie for the lead at 7 under par.


An immediate birdie response from Conners kicked Woods one down again, but Tiger would pull even once more, this time at 8 under, with his second birdie in a row via this 22-footer at 10.

There goes that man!

Woods dropped his first shot of the day when he found trouble long and right of the green at the par-3 13th and failed to pull off a flop, leaving his lob in the bunker between himself and the putting surface.

He used the frustration from that bogey to unleash this 129-mph swing off the tee at the par-5 14th, which would help set up a two-putt birdie.

This is what a 129-mph swing looks like: pic.twitter.com/FX04tOUm6H

I admit that I nearly crumbled to my knees as that putt barreled toward the hole. Looked dead center with about 5 feet to go. But a tap-in birdie means he's back to -8 and two shots back.

Woods hit each of his last four greens on his way into the clubhouse but couldn’t get any those lengthy birdie putts to fall, coming in in 1-under 34. 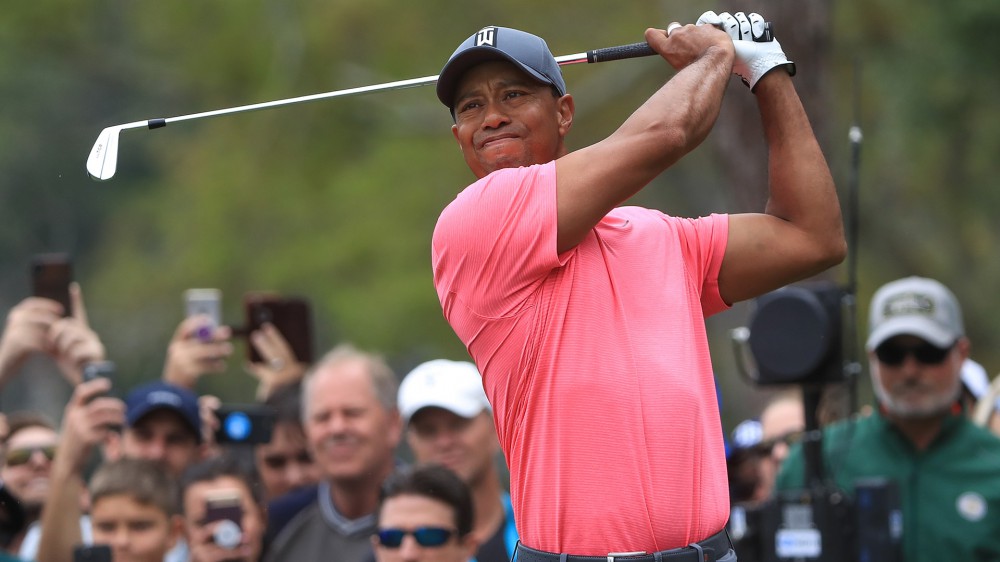