Tiger Woods got off to a strong start on the par 3s Friday at Augusta National.

He hit his tee ball to 7 feet on the par-3 fourth and sank the putt for his first birdie of the round. Two holes later, after a bogey at the difficult par-4 fifth, Woods drained a 20-footer at the par-3 sixth.

He even gave patrons a nice putter raise.

[email protected] draws a roar from the patrons. Three under par for the four-time Masters Champion. #themasters pic.twitter.com/YvDVrucQH9

After an unexpected bogey at the par-5 eighth, Woods made this 37-footer for birdie at the par-4 ninth.

It's a fist pump for Tiger at the Masters.

A birdie on the 9th hole brings him right back to -3. pic.twitter.com/O4ggZSMDoX

With three birdies and two bogeys, Woods shot 1-under 35 on the first nine. He turned in 3 under par for the tournament, four off the lead, and added another birdie at the difficult par-4 11th to reach 4 under.

Woods settled for par on 12 and 13, but then made back-to-back birdies on 14 and 15. The one on 14 was especially impressive considering he was nearly taken out on his approach shot by a security guard who accidentally slid into him:

After his approach shot on the 14th hole, a security guard makes contact with Tiger Woods. pic.twitter.com/0DNpWn1AkI

On the 14th hole, Tiger Woods’ drive found the second cut. Then, a security guard made contact with Tiger’s ankle after his approach through the trees.

Woods’ birdie on 15 – his sixth of the day – came via a 30-foot putt and a vintage Tiger fist pump. It also got him to 6 under on the day, within a stroke of the lead:

Two birdies in a row places Tiger Woods at six under par, one off the lead.#themasters pic.twitter.com/uJ5oICPr34

Tiger had a chance to tie or even take the solo lead with birdie chances from 9 and 13 feet on 17 and 18, but he missed them both and settled for pars.

Still, Woods came home in 33, carding a second-round 68. His Friday charge leaves him at 6 under for the week, just a shot off the lead held by Francesco Molinari, Jason Day, Brooks Koepka, Adam Scott and Louis Oosthuizen.

Tiger Woods walks off the 18th green with a smile. pic.twitter.com/IMhl2qPPyW

Tiger Woods fires a 68 in the second round of the Masters.

He’ll enter the weekend one shot back. pic.twitter.com/rIRCqXeIKm 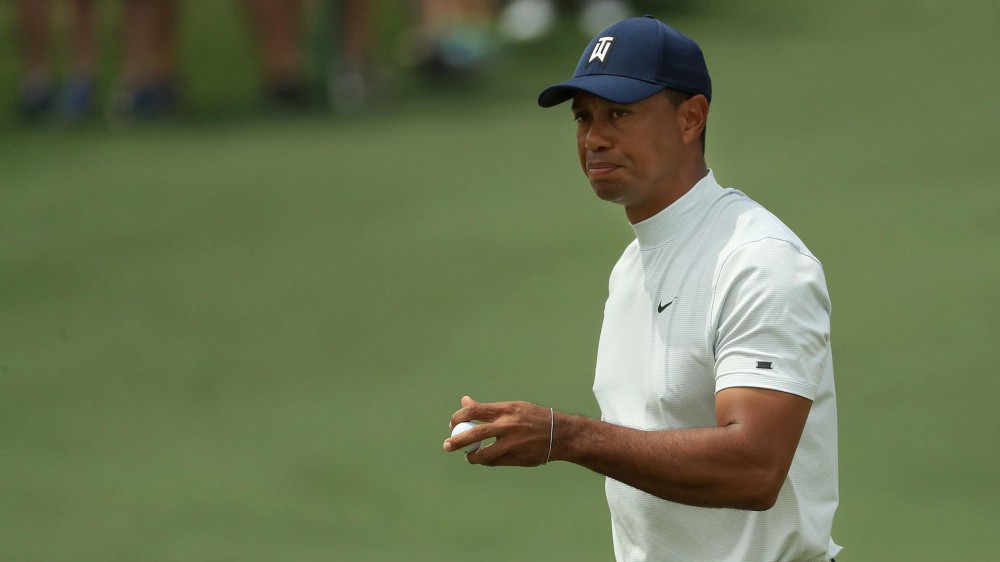