As another Masters Tournament approaches, here is a hole-by-hole look at Augusta National, with hole details, stats and other information, provided by the Golf Channel Editorial Research Unit: Uphill. Slight dogleg right. Drives to the left may catch the trees and block an approach shot. A precise approach shot to an undulating green is required in order to avoid having a difficult two-putt or worse. Downhill. Dogleg left. May be reachable in two shots depending on one’s position off the tee. A fairway bunker guards the right side of the fairway while there are trees on the left. A pair of large bunkers protect the front of the green on the left and right. 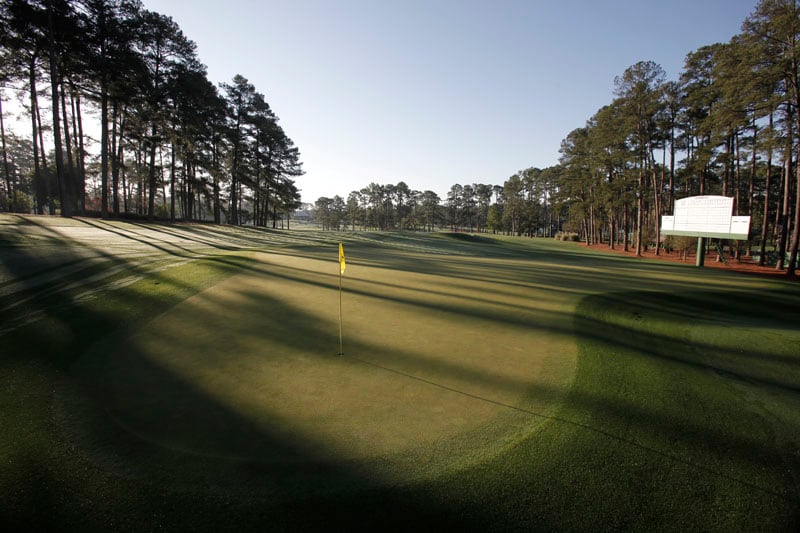 Uphill. Straightaway. The green slopes right to left with a thin neck on the left side guarded by a bunker. Green is 29 yards deep and 40 yards wide and is not entirely visible from the fairway. There are five bunkers on this hole – along with No. 7, it’s the most on any hole. A long par 3 that requires a long iron or even a fairway wood. The green slopes from back to front and is guarded by a pair of bunkers – one on the front right and one along the left side. Originally, the green was shaped like a boomerang but is now a bit wider with a less extreme bend. Uphill. Dogleg left. Drives to the left may catch one the two deep fairway bunkers which are positioned to demand accuracy off the tee. A 313-yard carry (2 yards shorter than 2018) off the tee is required to hit over the bunkers on the left. The undulating green slopes from back to front and a bunker behind the green catches approach shots that are hit too long. Following last year’s tournament, the Masters tees were moved back 40 yards – lengthening this hole from 455 to 495 yards and the scorecard yardage from 7,435 to 7,475 yards. Downhill from an elevated tee to a large, undulating green with a large bunker in front. A significant difference in elevation from the front to the back of the green makes the hole location very important. Straight and narrow off the tee. Drives are often played to the left-center of the fairway in order to set up an approach shot from a level lie. While players may be left with a short- to mid-iron approach, it is important to avoid the three bunkers in the front and the two bunkers in the back of the green. 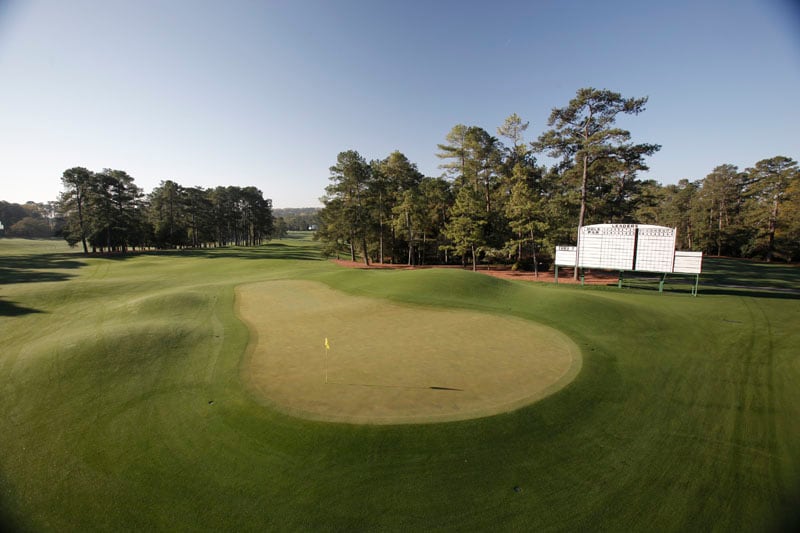 An accurate drive is needed to avoid the fairway bunker on the right side on this uphill hole although the best angle to the green is from the right side of the fairway. The long, narrow green has no bunkers around it. It is guarded instead by a series of mounds, the biggest of which line its left side. 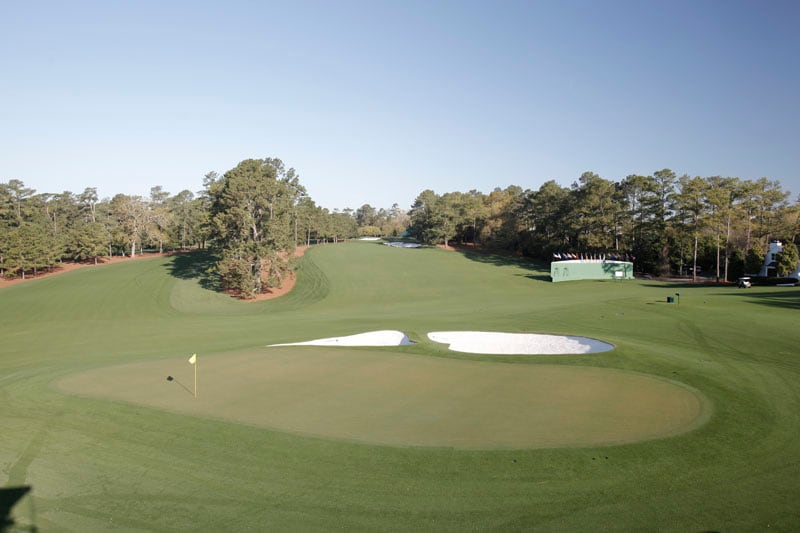 Dogleg left. Downhill off the tee, but uphill on the approach to the green. Tee shots are often hit down the right side and as far down the hill as possible in an effort to avoid having to contend with the two bunkers located left of the three-tiered green. This hole has a false front on its green that encourages approach shots to end up long as anything short will roll back down the front slope. Steeply downhill with a drop of some 100 feet from the tee to green. Players will try to drive their ball to the left or center of the fairway to take advantage of slopes and to leave themselves with the best angle into a green that slopes right to left. There are two bunkers on this hole – one fairway bunker and one greenside bunker. The tee shot plays downhill with a left to right dogleg. A pond guards the green to the left and a single greenside bunker is placed strategically right center. The hole was lengthened from 490 to 505 yards beginning with the 2006 Masters to become the first par 4 in Masters history to measure over 500 yards. According to Clifford Roberts in “The Story of the Augusta National Golf Club”, an Indian burial ground was discovered during the construction of the 12th green just beyond Rae’s Creek. Noting that hole No. 12 has become famous for its swirling winds which can catch a well-struck shot and drop into Rae’s Creek, he added that “this has happened so many times that some of the players are wondering if the spiritual displeasures of an Indian chieftain are causing the trouble.” There are a total of three bunkers. When the course opened, there was a front bunker and a single bunker behind the green (although originally Mackenzie intended for no bunkers on this hole). The bunker behind the green was replaced by two small bunkers located further to the right in 1951. Sweeping dogleg left. A right to left tee shot to the center of the fairway will allow a player to go for the green in two. The sloped fairway leaves players with the ball above their feet on their approach shots. A tributary to Rae’s Creek winds in front of a raised green with substantial slopes and behind the putting surface are four bunkers. 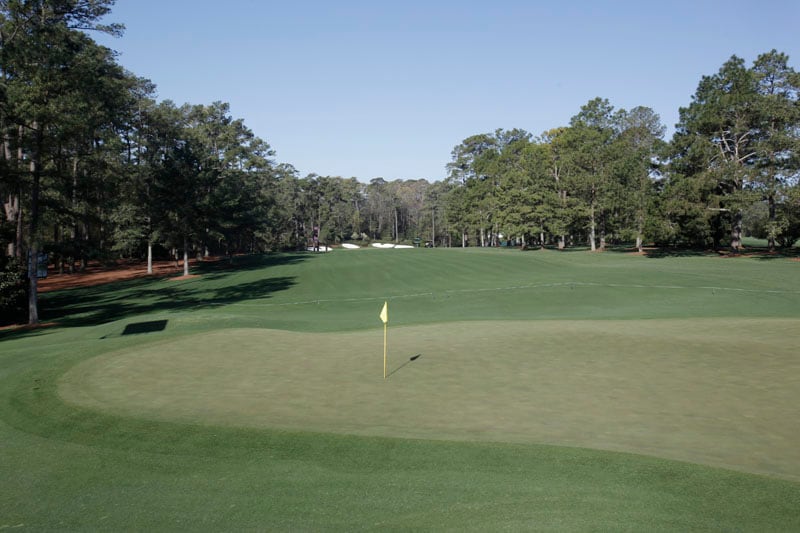 Uphill. Dogleg left. Reverse bank in fairway. Largest green on the golf course, 38 yards deep and 40 yards wide. The green rises nearly 6 feet in elevation from the front right to back left. The front third of the green is a false front. The hole was last lengthened by 35 yards with the relocation of the tee box before the 2002 tournament. Additional pines were also placed along the right side of the fairway at that time. This is the only hole without a bunker. A large fairway bunker on the right side was removed after the 1952 tournament. A reachable par 5 in two when winds are favorable. A well-hit second shot must be made over the pond and away from the bunker on the right that both guard the fairly shallow but wide green. The downhill second shot adds to the excitement of the second nine for both players and patrons. Bobby Jones firmly believed that all par 5s on the course should be within reach of two shots by better players. A short par 3 that is played entirely over water with a green that is surrounded by three bunkers. The green slopes significantly from right to left. If the flagstick is on the left, players can use the slope to feed the ball to the hole. Originally, Alister Mackenzie’s green at 16 resembled the one on hole No. 12 with a stream to the right of the green and two bunkers to the left. After proving too easy for Masters participants, a pond was built in 1947, and a new green with two new bunkers were built, as well. 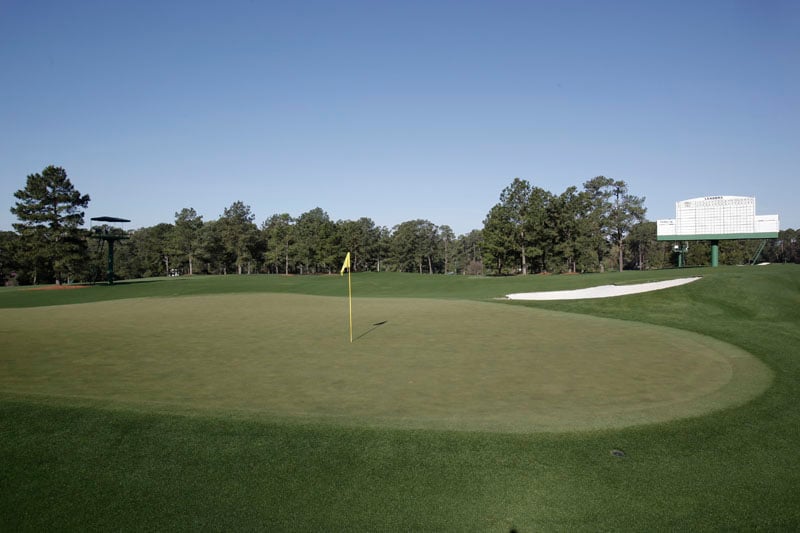 An uphill par 4 with pine trees lining both sides of the fairway. The ideal tee shot on this challenging hole is to the left side of the fairway. Two bunkers guard a green that seems to slope in all directions. The original green at 17 was designed without bunkers so it could accept run-up approach shots. In 1937, Perry Maxwell redesigned the green and added three bunkers in front of the green. The front bunkers required players to hit higher shots in order to reach the green. In 1966, the bunker located on the far left was filled in and a large mound was added on the left side of the green. 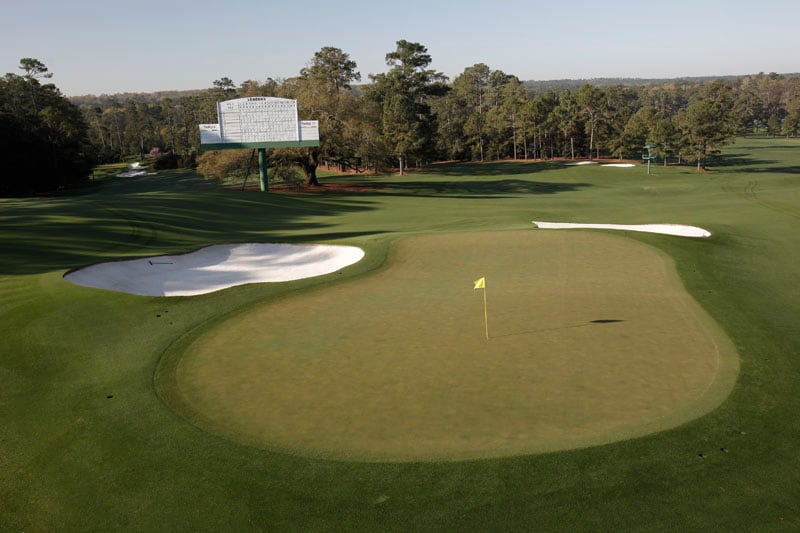 An uphill dogleg right that is protected off the tee by two fairway bunkers at the left elbow. A drive hit down the center of the fairway will often require a middle iron for an uphill second shot to a green guarded by two bunkers.