Despite having fewer worldwide wins, fewer top-5 finishes, fewer top-25 finishes and more missed cuts over the past two years, Jon Rahm is poised to overtake Dustin Johnson for No. 1 in the Official World Golf Ranking with a win in this week’s Farmers Insurance Open.

The Rise of Rahm is meteoric, but how is this possible? After all, Rahm has five worldwide wins vs. eight for Johnson in the same span?

We’ll start with the raw numbers over the 104-week cycle of the Official World Golf Ranking. These numbers include a win for Rahm in this week’s Farmers (the only way he could get to No. 1; DJ is not playing):

Johnson leads Rahm in every possible category, so you may be wondering, again, how is Rahm replacing DJ possible?

To understand this, you would need to understand the Official World Golf Ranking, which is all about the power of math, a recency bias and the divisor.

The ranking system can feel a bit overwhelming, so here are a couple of topline bullet points:

Next, you can look at how recent the event was to determine its true value to a player. Dustin Johnson’s 2016 U.S. Open victory was given 100 points, but now he’s only receiving 23.9 percent of its original weight. Conversely, Rahm’s win at the CareerBuilder Challenge was only worth 40 points, but because it happened on Sunday, he’s receiving the full allotment of points.

Why is DJ getting 23.9 percent of his U.S. Open total? Doesn’t that seem arbitrary? Actually, the OWGR has an intricate formula to determine the value of events. Any event a player has started in the previous 13 weeks is given full value. For the remaining 91 weeks, events drop off at a rate of 1.09 percent until they eventually fall off. Here’s an example:

With a win at Farmers, Rahm would have three victories and a runner-up finish inside the last 13 weeks.  That would total to 175.60, given full-point value. After this week, DJ would only have three events in the last 13 weeks and those finishes are T9-win-T14, for a total of 67.32.

Rahm is taking advantage of the full value for three of his five professional wins.

There is still one more important piece of the formula and that’s the divisor.

For instance, when Rahm won the Farmers a year ago he received 54 points. It was his 13th event and if 13 had been his divisor he would have had an OWGR total of 4.15, immediately placing him inside the top 20. Instead, to be more fair, it’s divided by the minimum number of 40 events played, giving him 1.35, which was around 110th (Rahm, though, had received enough points in his other 12 events that his win moved him to 46th in the OWGR at the time).

The maximum number is as important as the minimum. Many players compete in up to 60 events over the course of two years. Instead of hurting them by counting every event, the OWGR only counts the 52 most recent events in the 104-week cycle.

Why is the divisor so important? Because math. If a player wins a major (100 points) and has the minimum divisor, that major is worth 2.5 points (100/40). A player winning that same major who has the max divisor (52 events) only gains 1.92 points.

In the case of Rahm and Johnson, it’s Rahm who is taking advantage of his divisor in attaining maximum value for his play. Here’s a table of what it would look like after this week (again calculating for a Rahm win) to help explain:

What’s amazing about these numbers is that Rahm is still maintaining 77.78 percent of his original value on the points that he’s earned. As we said earlier, three wins are 100 percent. His Irish Open win is 81.82 percent, while even his 2017 Farmers victory is still earning 56.5 percent of its original value.

On the other side, DJ is only maintaining 51.3 percent of his total points earned.

And there you have it. The math favors Rahm, who is still on the outset of his career. Eventually, it will hurt him. But, for now – and right now – Rahm has an opportunity to take all of these numbers and turn them into the world’s No. 1 ranking.

To do that, the scenario is quite simple: Win this week. 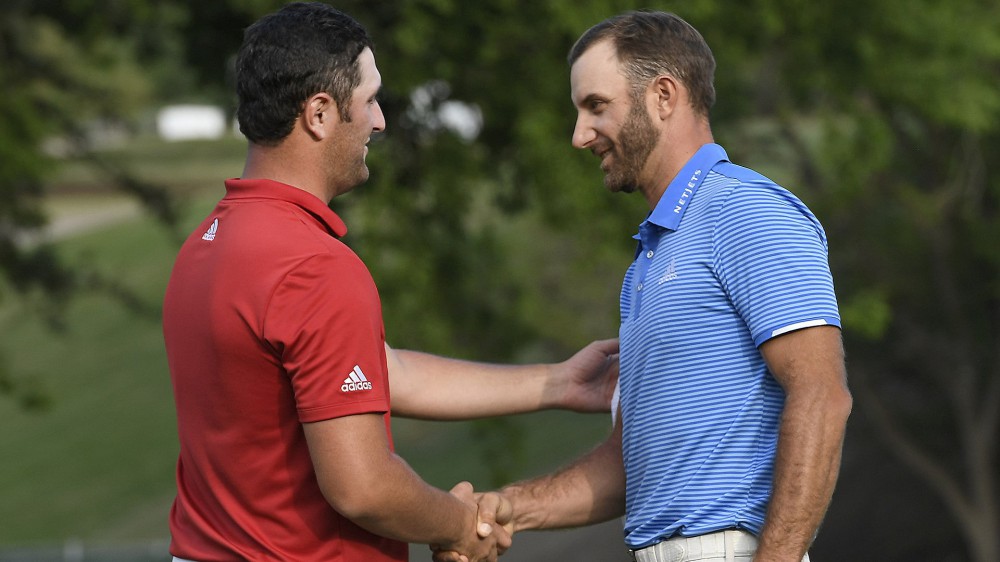