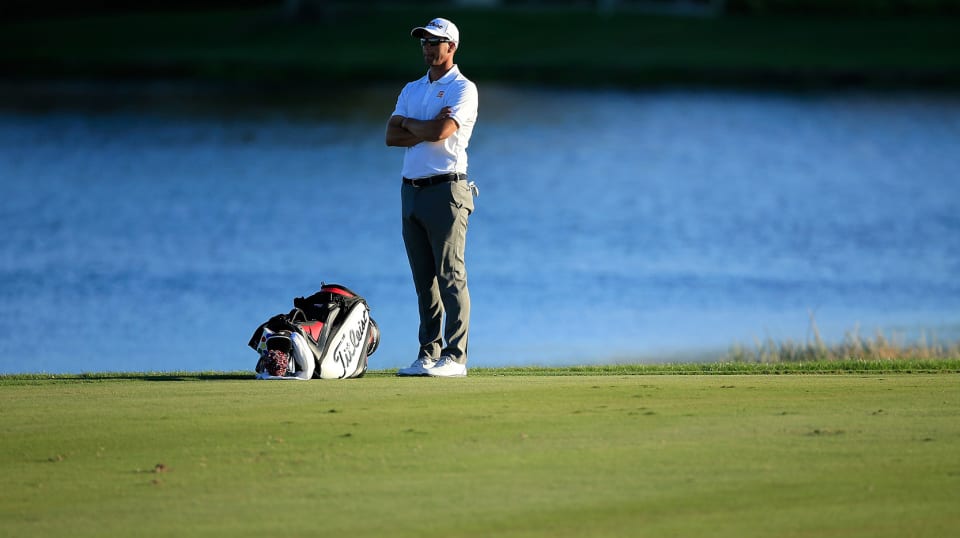 How much water can you get into and still hope to win the Waterford crystal trophy?

“You can survive hitting it in the water once or maybe twice for a tournament,” said Adam Scott.

He would know. At The Honda Classic in 2016 he’d built a three-shot lead when he put two in the soup at the par-3 15th hole in Round 3. “It’s hard to watch,” Johnny Miller said on NBC.

Alas, Scott steadied himself and still won the next day. He’s the last to win on TOUR with a quadruple bogey on his scorecard, a stat that came up recently when Viktor Hovland made his own quad – without any water balls – yet contended deep into the World Golf Championships–Workday Championship at The Concession.

None of them hit into the water even once en route to victory.

And yet there are two caveats. The first is that sometimes the bailout is just as bad as the water ball, merely postponing the inevitable. For example, as players size up the white-knuckle sand shot from the back-left bunker at the par-3 15th hole, they can’t help but notice that the green runs away from them and back toward the same pond they just avoided with the tee shot.

Chipping downwind back across the green at the par-3 17th can end in liquid disaster, as well.

The second caveat is that water doesn’t have to drown your chances. Take THE PLAYERS Championship last week. Paul Casey hit two balls in the water and made a quad at the island 17th hole in round one but fought back and tied for fifth, three back. Ben An, conversely, pumped four in the water on 17, made an 11, and missed the cut.

Scott is well-practiced at hitting into the water but winning anyway. He hit into the lake with his approach shot at the 18th hole at THE PLAYERS in 2004, but got up and down to save bogey for the win. He won the Honda despite his calamity on 15 at PGA National in ’16, and won the WGC-Cadillac Championship at Doral the following week – despite hitting into the water at the third and fifth holes and making double bogey both times.

“I think it’s one of those things, when you’re playing good, you can bounce back from one trip to the water,” Scott said. “Obviously the quad (at the 2016 Honda) is not ideal and I try not to think about it too much, but I was playing exceptionally well that week and just kind of figured, you know, if I keep playing like this I’ll be able to claw my way back into it, and fortunately I did.

“I think after the experience of playing these Florida golf courses for 20 years,” he added, “it’s inevitable you’re going to hit one in the water, especially around here when it’s windy. You’re going to have to accept it and do the best you can to get past that hole and rebuild.”

Last week water figured prominently at THE PLAYERS. Before that it was the Arnold Palmer Invitational presented by Mastercard, where Bryson DeChambeau’s majestic tee shots soared over the blue like British Airways. Prior to that, water was part of the story at the WGC-Workday Championship. Now comes the Honda at PGA National, which has been the hardest par-70 course on TOUR (non-majors) three years running. Why? It’s largely about the water, especially at the Bear Trap (Nos. 15-17).

“You really don’t get away from it here at PGA National,” said Harrington, who finished T31 at the Arnold Palmer but missed THE PLAYERS.

There were 339 balls in the water at least year’s Honda, which was the most on the PGA TOUR. Not to jinx it, but Harrington is one of seven players in the Honda field have come this far without hitting a ball in the water in the 2021 Florida Swing. The other six: James Hahn, Phil Mickelson, Scott Stallings, Adam Schenk, Matt Wallace and Xinjun Zhang.

Good luck to them.