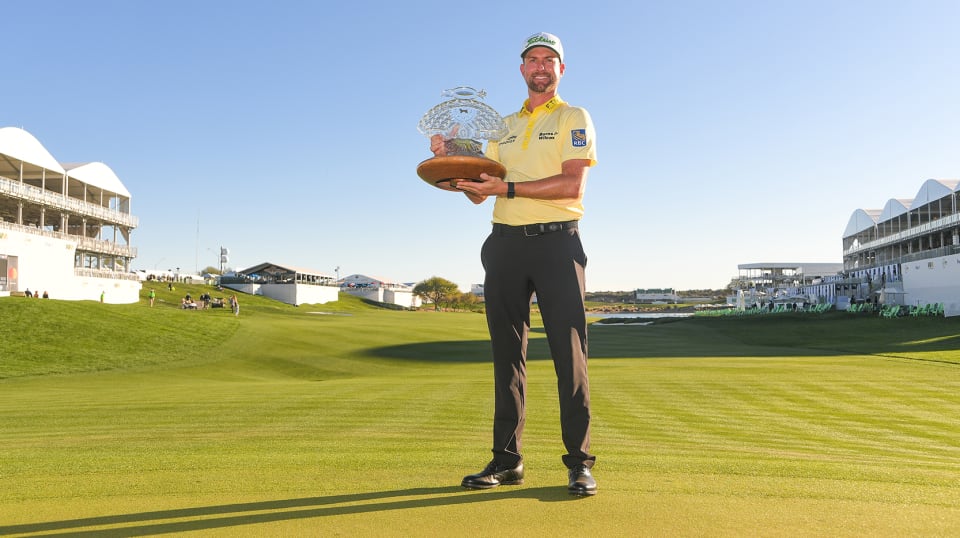 Simpson has slowly pared down his schedule over the past few seasons. He focuses on courses that fit his game and tries to avoid being away from his family for more than two consecutive weeks. He played just 14 events last season, but had eight top-10s, including five top-three finishes. Playing less helps him feel excited when he arrives at an event and grateful for the opportunity, Simpson said.

When Simpson is home, he practices just two or three days per week. He actually spends more time with his trainer, Cornel Driessen, than at the course. Simpson used to feel guilty about leaving the house but his wife, Dowd, has encouraged him to be “all-in where his feet are.”

“And when I get home, my golf stays in the garage with my clubs.”

The book helped him focus on a few specific steps he could take to play his best. He knows he’ll never be one of the longest hitters but he consistently ranks in the top 25 of Strokes Gained: Approach and Around-the-Green. To fortify those areas, he started working with instructor Butch Harmon and short-game coach Pat Goss in 2015. Once he found the arm-lock putting method, he returned to the game’s elite. He started working with sports psychologist John Silva in 2016 and Driessen in 2017.

“In 10 years, I’m never going to look back and wish I’d won this tournament or that tournament,” Simpson said. “It’s going to be, ‘Did I get the most out of the talent I was given?’”

Simpson has made the last four TOUR Championships after missing in 2015 and ’16 while struggling with the transition from the belly putter. In addition to his two wins last season, he won THE PLAYERS Championship in 2018.

Last season, he was sixth in Strokes Gained: Approach, 13th in SG: Putting and 32nd in SG: Around-the-Green last season. His caddie, Paul Tesori, said he’s a better all-around player than in 2011 and 2012, when he won three times, including the U.S. Open. His efficient approach to playing and practicing also has paid dividends.

“When he feels like he’s more present at home,” Tesori said, “it gives him more joy when it is time to tee it up on TOUR.”

Last year’s win in Phoenix would not have been possible if not for his physical and mental transformation, Simpson said.

Silva, the first sports psychologist Simpson has worked with, has taught him to be patient, especially during frustrating times. Simpson was 10 off the lead after the first round at TPC Scottsdale. With eight holes remaining in his second round, he was still just one shot inside the cut line. He birdied six of his final eight holes to shoot 63, however, and followed with a 64 in the third round.

“The part of my mind that has gotten better is … just hanging in there,” he said. “In the course of 72 holes, you might figure something out and find something and then you play 27 holes in (13 under).”

Physical strength was key, as well. That paid off on two holes on TPC Scottsdale’s front nine, where it’s easy to overlook a player’s performance. According to Tesori, Simpson’s weight has increased from 174 pounds in 2017 to 200 today. He lost three pounds of body fat in the process. His increased strength has allowed him to summon an extra 7-8 yards off the tee when necessary and rely more on his “fairway finder” swing without leaving himself too far behind the competition.