Improve your pivot to pure it like Tommy Fleetwood

British Open week is always a fun time to hear charming turns of phrase from the other side of the pond. One of the most descriptive examples works particularly well for Tommy Fleetwood, who once again tore up a major championship venue with a stack of birdies.

Known as one of the purest ball-strikers on any tour, Fleetwood made six birdies—including an exquisite one from 12 feet on the brutal 18th hole—to shoot a second-round 65. Fleetwood's card was bogey free, and he took just 26 putts on his way to the top of the morning leaderboard.

Fleetwood makes pure, repeatable contact thanks to a simple, technically-sound swing that doesn't have any compensations. Top Alabama teacher Tony Ruggiero got his first closeup look at Fleetwood last month at the U.S. Open, and says Fleetwood's action is one of professional golf's most impressive. "You don't need slow motion video to see how good Tommy Fleetwood's swing is, but when you slow it down, it gets even more obvious why he stripes it so often," says Ruggiero, who is based at the Country Club of Mobile and the Bay Point Resort in Panama City Beach, Fla. "His clubface is so quiet through and right after impact. The toe isn't chasing the ball through. Most amateur players have a clubface that is either dramatically shutting or opening through impact. His stays so square—or looking at the target—a long time. He doesn't miss many too far off line."

Clubface control comes not just from the hands, but by using the body correctly, says Ruggiero. "He's delivering the club to the ball with the rotation of his body, or his pivot," he says. "His hips turn in front of his chest and his chest turns in front of the clubhead. There's none of the 'stall' that hurt so many amateur players, when they stop turning their body and are forced to deliver the clubhead with their arms and hands. That's where so much of the inconsistency comes from—from relying on that timing."

You might not be able to hit the same kind of lasers (or average almost 320 yards per drive, like Fleetwood has), but by working on a simple pivot drill, you can clean up your ball-striking. "Take your pitching wedge and hit some easy half-speed shots—but concentrate on holding the finish," says Ruggiero. "You want your hips to be open to the target, your chest turned toward the target, weight all the way onto your lead foot and your lead wrist flat. You don't want the toe of the club to be flipped over. It's going to look a lot like that photo of Fleetwood at the top of this story. Whether or not you grow your hair out is up to you." 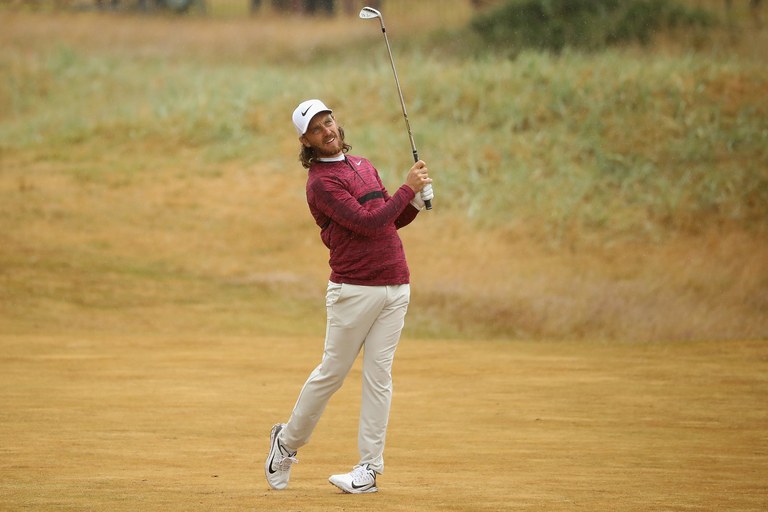 Francois NelCARNOUSTIE, SCOTLAND – JULY 20: Tommy Fleetwood of England plays a shot during the second round of the 147th Open Championship at Carnoustie Golf Club on July 20, 2018 in Carnoustie, Scotland. (Photo by Francois Nel/Getty Images)

Trump to award Woods the Presidential Medal of Freedom