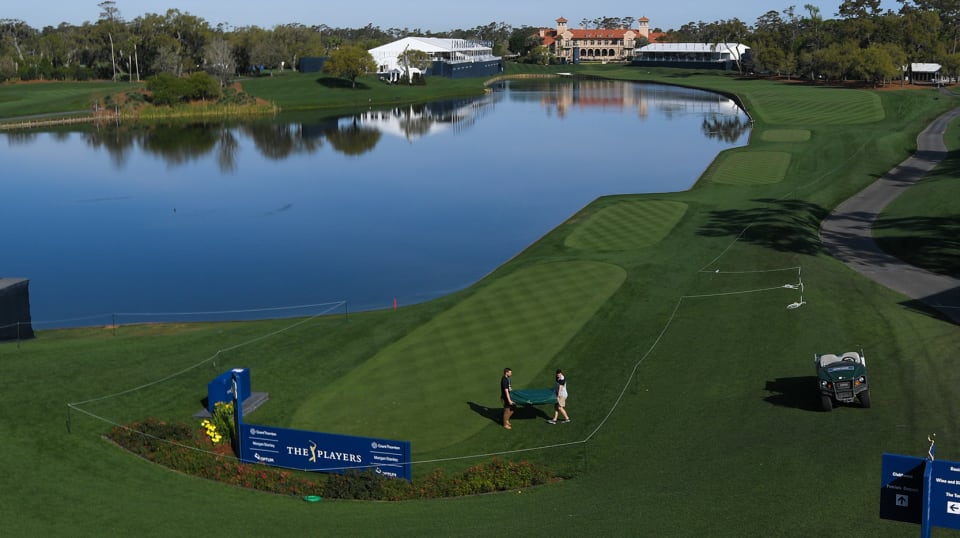 Officials declared the left side of the lake that runs down the famous finishing hole will be declared OB after suggestions players might look to hit tee shots across the lake towards the ninth hole, before hitting back across water to the green.

Players on the ninth hole are not affected, with balls lost into the water on that hole treated as a normal hazard.

“In the interest of safety for spectators, volunteers and other personnel, The PLAYERS Championship Rules Committee has installed an internal out of bounds left of the lake for play of hole 18. Similar instances of internal out of bounds for safety purposes have occurred at The Open Championship (No. 9) in 2017, the 2021 Sony Open in Hawaii (Nos. 13, 18), and most recently, the 2021 Arnold Palmer Invitational presented by Mastercard (No. 6),” the TOUR said via statement.

Earlier on Tuesday, Bryson DeChambeau had indicated he might entertain the idea of bombing a drive or two over the lake despite not seeing a significant advantage. That choice has now been eliminated from his thinking. DeChambeau’s significant length helped him win the Arnold Palmer Invitational presented by Mastercard last week – his eighth TOUR win.

“I’ll probably give it a try, but it’s most likely not going to happen. If there’s stands there, there’s really no reason to go for it, when I could just drive it 100 yards from the green if I get a good wind normally,” DeChambeau indicated. “It’s not really that big of an advantage but taking the water out of play and having an easier second shot, it may be easier.”

PGA TOUR rules official Stephen Cox said while players actions can certainly be a driving factor in determining these sort of decisions, the main issue on this occasion was safety.

“It’s not the way the hole was designed to be played and when a player does choose that option it brings fairly significant safety concerns for us,” Cox said. “As we saw at Birkdale in 2017, players tend to take obscure lines and locations to gain a strategic advantage but if it is placing others at risk and danger the committee needs to act on it quickly.

“Just as we reintroduce fans the last thing we would want is to have someone walking back towards the tee at the ninth hole and get a ball in the face because someone hits it down there. Errant tee shots are errant tee shots but when someone deliberately takes it down there it is more of a concern for us.”