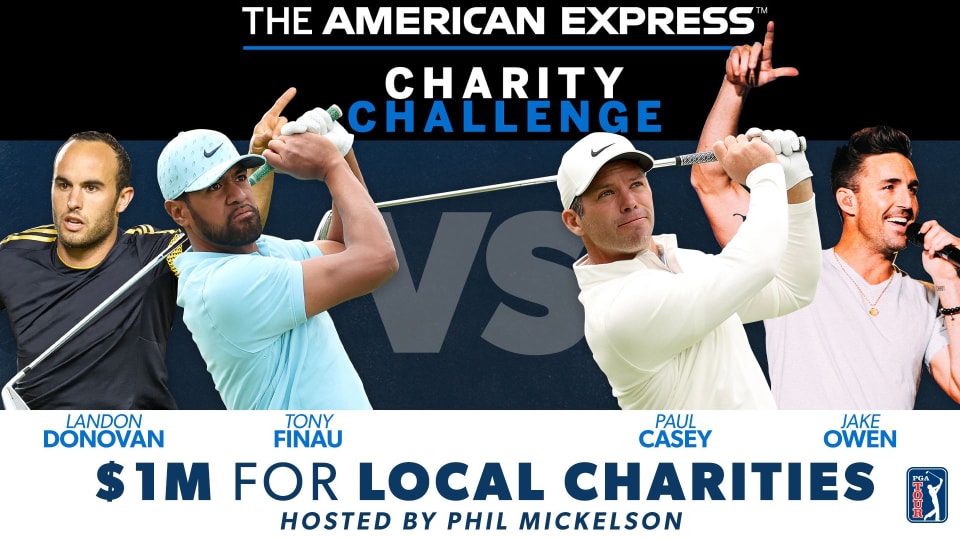 The Charity Challenge, which was announced in early January, will be hosted by 44-time PGA TOUR winner and World Golf Hall of Fame member Phil Mickelson and be broadcast live by Golf Channel, PGA TOUR LIVE, GOLFTV and on social platforms on Wednesday, Jan. 20, at 2 p.m. PT.

The exhibition event will pair Finau and Donovan against Casey and Owen for a 9-hole match play event with a modified alternate shot format. Each team will be representing a charitable initiative with winnings donated via The Mickelson Foundation, the tournament’s host foundation. Finau and Donovan will play for ‘Youth Development and Education’ charities while Casey and Owen will play for ‘Health and Wellness’ charities.

In addition to serving as host and emcee, Mickelson will participate in the match through “Phil’s Challenges.” Mickelson will challenge Finau and Casey throughout the match at his discretion and can include long drives, closest to the pin or even trick shots. If the challenged player beats Mickelson, money will be donated to their charity initiative, but if they lose the challenge the money will go to the other team’s charity initiative.

When the match reaches the second to last hole – the par-3 17th hole known as Alcatraz – each player, including Mickelson, will get a shot at a one-million-dollar hole-in-one for charity. For any player that makes a hole-in-one, an additional one-million-dollars will go to Coachella Valley charities.

Showcasing its best player field in recent history, The American Express includes seven of the top 20 players in the Official World Golf Ranking, a dozen major champions and 14 past tournament champions, including every winner dating back to 2012, and 12 of its most recent 13 champs.

The tournament’s roster of 156 professional golfers will play a round each at PGA WEST’s Stadium Course and Nicklaus Tournament Course over the first two rounds on Thursday and Friday before playing the Stadium Course exclusively on the weekend after the 36-hole cut.

Ranked No. 2 in the world, Jon Rahm will make his second start of the calendar year, coming off of a T7 at the Sentry Tournament of Champions in Hawaii. Rahm won twice on the PGA TOUR last season at The Memorial and The BMW Championship during the FedExCup Playoffs. He earned his second career PGA TOUR victory at The American Express in 2018, defeating current defending champion Andrew Landry on the fourth playoff hole.

Other top-ranked players include Patrick Cantlay (No. 9 in the Official World Golf Ranking), Patrick Reed (No. 11), four-time major champion Brooks Koepka (No. 12), Matthew Wolff (No. 15), Sungjae Im (No. 18), and Finau (No. 20). This week marks Koepka’s debut at The American Express.

Southern California native and fan favorite Rickie Fowler, a five-time PGA TOUR winner, will kick off his PGA TOUR campaign in 2021 with his fourth appearance at The American Express. Fowler will try to improve on his T10 finish at PGA WEST last year.

Further, The American Express field includes 14 players in the top 30 of the 2020-21 PGA TOUR FedExCup standings, and 10 players who competed in the 30-player field at the 2020 TOUR Championship