THACKERVILLE, Okla. – In a sport filled with bold personalities, Justin James can often stand out by simply not standing out.

James is quiet and soft-spoken, and this week at the Volvik World Long Drive Championship he has been all business. The small talk was kept to a minimum, and the steely focus never left his face.

That is, until he uncorked a 435-yard bomb that made him the best long driver in the world.

James, 27, needed only to find the grid with one of his final four balls against Mitch Grassing, but he won in style by serving up one of the longest shots of the evening at the Winstar World Casino and Resort. With his ball still mid-flight, James watched its trajectory carefully on the big screens that lined the stage.

Once it landed in bounds, the “Snapping Turtle” threw his club high in the air and went straight for the championship belt that is now deservedly in his possession.

“There’s a time to celebrate,” James said. “You can’t do it too early, or you might look dumb. So you’ve got to wait.”

James’ wait paid off, as he quickly scaled the wall behind the tee box to begin celebrating the biggest win of his career with his wife. It’s also his third victory of the 2017 season on the World Long Drive Tour and lifts him from No. 3 to No. 1 in the world.

James’ confidence never wavered, and when he left the stage after winning his Round of 16 match he stated simply, “I’m the best, so come get me.” The competition couldn’t keep pace in Wednesday’s finale under the lights, as James breezed past Paul Howell and Nick Kiefer to earn a spot in the finals.

“Regardless of the result, I felt like I was the best,” James said. “I try not to be too results-oriented, but honestly, there’s just so much anxiety and nerves this week because it’s such a huge event.”

James was able to breathe a little easier when Grassing was unable to find the grid with any of his eight balls in the final. He went 0-for-7 in his quarterfinal match with Wes Patterson before launching a 435-yard shot to escape with a win, but he couldn’t find similar magic with his back to the wall against James.

“The finals of the World Long Drive Championship, it’s a whole different level of pressure,” Grassing said. “The first few balls, I kind of missed them. I think I started rushing a little bit, maybe the pressure got to me. I made an equipment change, but I just couldn’t find it.”

But Grassing had plenty of company this week among players who couldn’t stack up to James’ towering totals. He may not have the flashiest personality or the loudest voice, but after three days of 400-plus yard shots seemingly fired at will, James has the belt that all of his other peers covet.

“It’s crazy. I can’t really describe it,” he said. “You know they say when I watch games, ‘There are no words,’ and I think they’re stupid. But now I’m the stupid one, because there’s no words to describe this. It’s the best thing ever.” 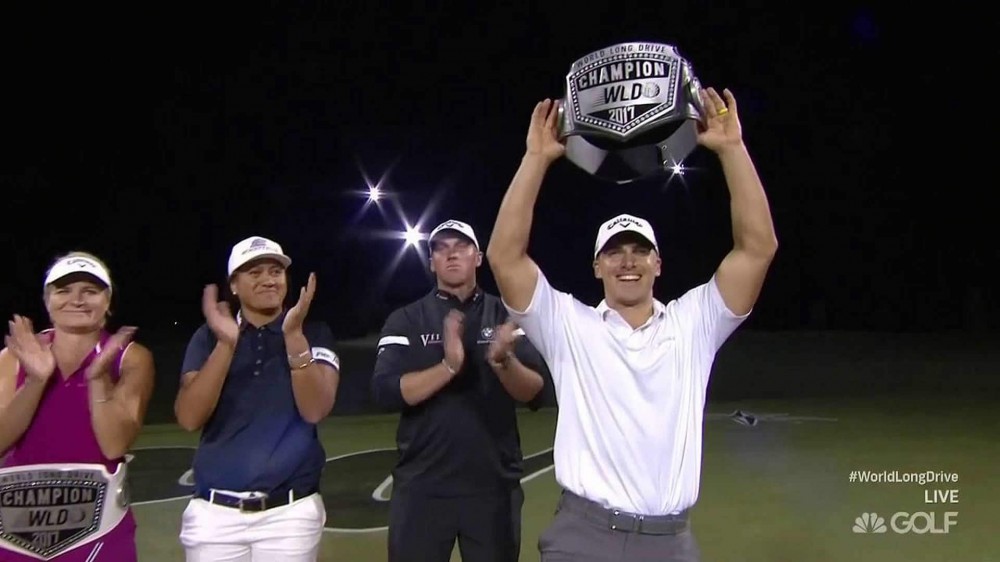