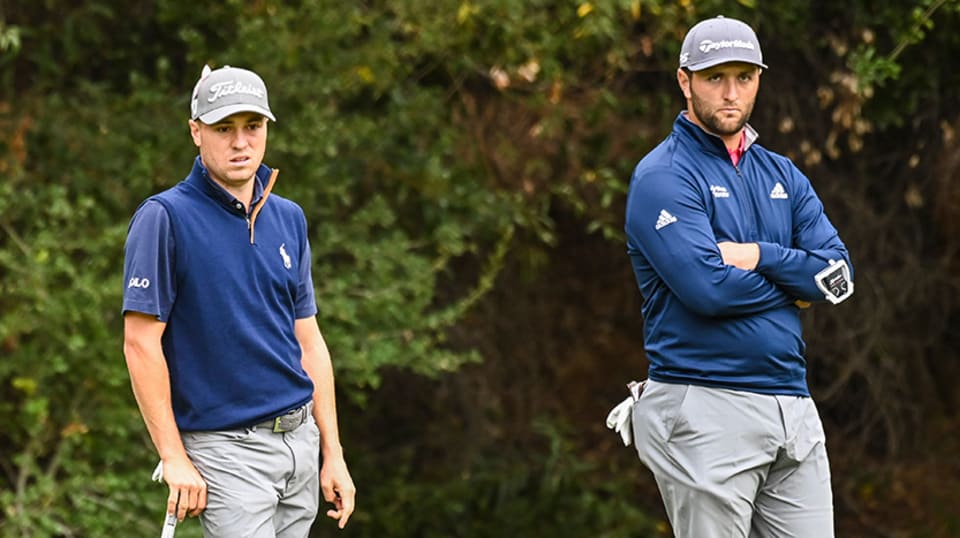 THOUSAND OAKS, Calif. – It was supposed to be a showdown between two stars amongst the hills they once filmed epic movies and television shows. But there were no Oscar- or Emmy-winning performances from Justin Thomas or Jon Rahm on Sunday at the ZOZO CHAMPIONSHIP @ SHERWOOD.

Instead it was Patrick Cantlay who snuck up on the pair, going past them both to secure his third TOUR win.

Former FedExCup winner Thomas started with a one-shot lead over Rahm while Cantlay began three off the lead. But his 7-under 65 was enough to win outright after Thomas shot 69 and Rahm 68, leaving the powerful pair a shot off the pace.

For Thomas, it was a lack of success on the par 5s that hurt his run. A birdie on the first of five long holes Sunday was the only one he managed, and while the heat was on down the stretch, Thomas couldn’t find a way to break par. Between the seventh and 17th holes, he had 10 pars and a bogey, allowing Cantlay to pounce.

“I just didn’t play very well. It’s unfortunate because I feel like I usually could have shot 5-under out there. To play the par 5s 1-under is just unacceptable if you’re trying to win a golf tournament. I fought like hell, I fought as hard as I could, I just didn’t have my best stuff,” Thomas said.

Thomas was still in the mix as he geared up for his approach shot to the par-5 16th from 245 yards, but he flailed it to the right into a creek.

“I think if I birdie 16, I win the golf tournament. Something I’ve kind of been struggling with this week is leaving the face open. I just didn’t trust to strengthen my grip… and there’s no excuses other than just poor execution,” he added.

“It just sucks when you’re right there and you don’t get it done, but hopefully I’ll learn from it to where it won’t happen anymore.”

Going forward, Thomas foreshadowed some work on his mental game as much as his swing.

“I’ve got to find a way to kind of just stay a little bit more focused out there. It’s crazy, but sometimes it’s hard to just kind of keep the killer instinct and stay in the zone when it’s as quiet as it is out there,” he said referring to the current spectator-free COVID-19 safe conditions.

“It’s tough, but we’re all dealing with it and I just have to find a little bit better way with how to cope with that here in the next couple weeks.”

Rahm had appeared to be the likely champion when he birdied the seventh, ninth and 11th holes back-back-to-back, but bogeys on the 12th and 13th holes sent him reeling. He managed to fight back, but the Spaniard ultimately missed a 15-foot chance on the 17th and a 19-foot putt on the 18th. Either would have allowed him to catch Cantlay and force extra holes.

“I can tell you none of us are happy. It’s upsetting … I was swinging it good all day. I keep going back to 12 and 13, just a couple unlucky moments,” Rahm said. “Wind switched, gusts on 12 that made me end up short with a not impossible shot, but very farfetched to hit it close, and then on 13 pretty much the same thing.

“It’s unfortunate but there’s a lot of positives to take. I hit it great off the tee and my iron game was really good. I hit a lot of shots the way I wanted to, a lot of fades and draws, and I was moving the ball really well, which come Augusta, it’s a positive to take.”

Rahm said his final putt was a tough one as it was downhill and needed to be died in the hole. He read it a cup left and it broke a little more. For the 25-year-old, it was the hole before, or even earlier in the week, where it was lost.

“I thought the one on 17 was in the whole way and at the end it just stayed right, didn’t break,” Rahm said.

“It is what it is. I can go all the way back to the first hole of the tournament where I missed a 3‑footer for birdie on 10 to start the tournament … I can pick easily one shot I could have done better. But it’s just golf. It’s what it is, it happens.”

Ironically, right after he missed his chance, Thomas made an inconsequential birdie of his own. Inconsequential except for the fact it moved him into a tie for second, which stopped Rahm returning to world No. 1 at Dustin Johnson’s expense.

There was a little drama after all.