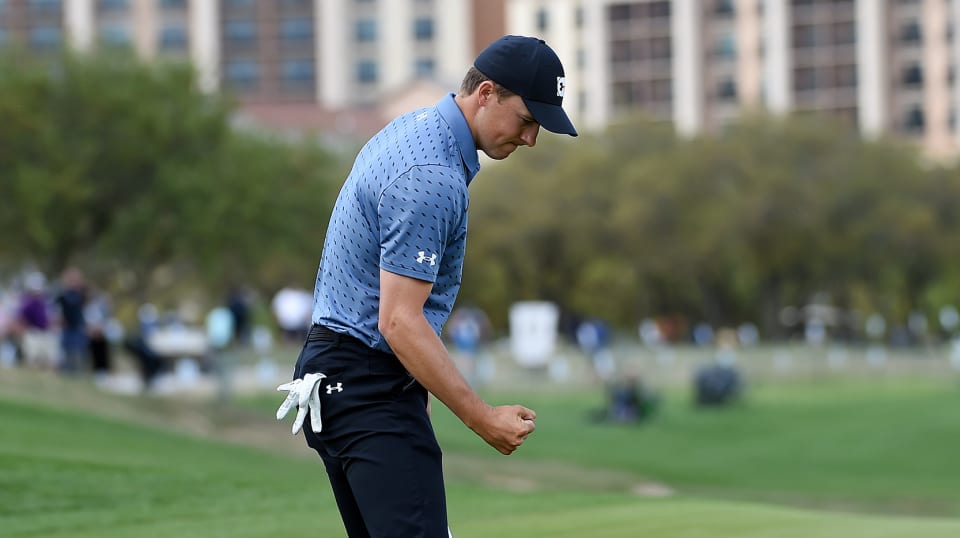 After enduring a winless streak that stretched nearly four years, to the 2017 Open Championship, Jordan Spieth birdies two of his first three holes to get his nose out front, finally hits some fairways – 10 of 14, his best of the week – and cards a final-round 66 to win the Valero Texas Open by two over Charley Hoffman (66) and four over Matt Wallace (70).

Here are five things you may have missed from the Valero Texas Open..

“I probably didn’t feel like I needed this win,” Spieth said after an emotional 18th hole embrace with his wife Annie Verret. “I felt like other people needed this win.”

OK. But maybe everyone needed it. Whatever the case, Spieth, who could do no wrong early in his career – especially in his FedExCup winning season in 2015 – broke a drought that went back 82 starts. He started to tear up on the 18th green, especially when wife Annie came running toward him for a celebratory hug and kiss. The win was the first since they’ve been married.

“There’s peaks and valleys in this sport,” Spieth said, “but I never expected to go this long.”

His slump was even more painful for the spotlight he was under, the result of his staggering early successes that vaulted him to No. 1 in the world. He dutifully answered all the questions thrown at him even though, as he said Sunday, it seemed sort of unfair that no one kept asking Hoffman or Wallace or 95 percent of the other players on TOUR why they hadn’t won in a while.

The superstars, of course, are in a class all their own, and Spieth and his caddie Michael Greller tried to use that fact to their advantage in the final round at TPC San Antonio.

The mind game worked well enough; Spieth, whose victories have often been a roller-coaster ride, held steady on the back nine. It was the fifth time in his last six stroke-play starts – starting with a T4 in Phoenix in February – that he has been in the top 10 through 36 holes. And he continued to say he’s pleased with the improvements, but still not totally satisfied, recalling the old quote attributed to O. Henry on New York City: “It’ll be a great place if they ever finish it.”

Said Spieth, who will be amongst the favorites at the Masters Tournament this week, “I really didn’t have great control of the ball this weekend at all.” Case in point: He finished T78 in driving accuracy for the week – out of 78 players who made the cut.

He moves to 10-for-19 with the 54-hole lead/co-lead in his TOUR career. He also joins Tiger Woods, Phil Mickelson, Rory McIlroy and Justin Thomas as the only players to have won 12 or more times before turning 28.

2. Hoffman back in his element.

With that kind of pedigree, it was no great surprise Saturday when the four-time TOUR winner Hoffman, 44, played the final seven holes in 6 under par as he shot 65 to reach 10 under par. He would go into the final round just two back of Spieth and Wallace and would keep the heat on the winner until the end. Needing an eagle at the par-5 finishing hole, Hoffman made par.

“It fits my eye,” he said of the Oaks Course at TPC San Antonio. “You’ve got to shape tee shots. You’ve got to be in certain spots hitting iron shots into the green.”

Although he chipped in for birdie at the 13th hole, he couldn’t produce quite enough fireworks to scare the leader, settling for pars on three of the last four holes.

3. Wallace has eyes on America.

Matt Wallace, a four-time winner on the European Tour, is a global player whose FedExCup finish last season (134th) gets him into some tournaments, but not all. The Englishman got a sponsor’s exemption into the Valero and made the most of it with a final-round 70 and a solo third.

Although he putted poorly Sunday, especially on the front nine, it was the best career finish on TOUR for Wallace, who finished T3 at the 2019 PGA Championship. It was also a major step up this season; his best heading into the Valero was a T18 at the Arnold Palmer Invitational presented by Mastercard. Now he’s aiming to get into more tournaments on TOUR, an objective that will be more easily met if he can crack the top 50 in the Official World Golf Ranking (he was 60th going into the Valero).

“It’s difficult with COVID at the moment,” Wallace said. “A lot of the players on the PGA TOUR are playing a lot and it doesn’t drop down to where it used to drop down with my category being just outside the Top‑125. Obviously playing here off an invite, which I’m very grateful for, and a couple other invites I’ve had through top‑50 in the world. Just slipped outside of that at the moment.

“So hopefully I can take care of that and then the schedule will clear up,” he added. “Whenever I get a chance to play in Europe, I’ll take that if it works on the schedule, but popping back and forth for me just doesn’t seem right. … It’s looking likely that I’ll be over here for the foreseeable future for now.”

Asked how he remains upbeat amid his slump, Kevin Stadler didn’t mince words.

“I don’t at all,” he said, laughing, after signing for a second-round 70 to get to 5 under par, four back halfway through the Valero. “I fight like hell to do that.” He would fall back with a final-round 76 to finish T54, which was disappointing, but it didn’t change the fact that he had made the cut for just the second time in his last 24 starts on TOUR.

The oldest son of 1982 Masters champion and 13-time TOUR winner Craig Stadler, Kevin had enjoyed a steady upward trajectory since his days at USC. He won the Colorado Open and on the Korn Ferry Tour (four times) before his breakout win at the 2014 Waste Management Phoenix Open. That got him into the Masters, where he finished T8. It’s his most recent top-10 finish.

A broken bone in his left hand started Stadler’s swoon in 2015, and although it healed – he now says he’s 100% healthy – bad habits took over. His confidence suffered. Last season, playing on a Major Medical Extension, he missed 10 cuts in 10 starts with just one round in the 60s.

Stadler’s T77 at the Farmers Insurance Open in January offered a glimmer of hope. At TPC San Antonio, he said, he still missed fairways, but not by a lot, and he has always liked hard courses.

“I’ve been in a deep, dark hole for quite a while now and just been clawing away trying to get it back,” he said. “I know what I’m capable of if I can make it happen. It’s just been a long, long time. It’s been extremely difficult, but just trying to plug away and make it work again.”

At least he’s got more time to do so. Due to COVID 19, players on medical extensions last season were allowed to negate starts made from the beginning of the 2019-20 season through the 2020 Arnold Palmer Invitational presented by Mastercard. Stadler had missed nine of nine cuts in that span.t.

South Africa’s Erik van Rooyen, who shot a final-round 71 to finish T14 at the Valero, was until recently having a season to forget. He shot an opening-round 76 and withdrew with back pain at the Masters in November. Then, after the holidays, came missed the cuts at the Sony Open in Hawaii, Farmers Insurance Open and Waste Management Phoenix Open.

Coming into the World Golf Championships-Dell Technologies Match Play, where van Rooyen was the 62nd seed, his best result was a T20 at the Vivint Houston Open. But he found something in Austin, getting out of group play before losing to Jon Rahm in the round of 16. Van Rooyen’s T9 finish was his best result this season.

“Yeah, the start of the year was nothing to write home about, that’s for sure,” he said from The Oaks Course at TPC San Antonio. “I don’t know. I think I’m – everything’s just ticking rather nicely.

“… You can get kind of hard on yourself sometimes, but you’ve got to stay patient, you know, and trust yourself, trust the process,” he continued. “It’s so cliche, but it’s the truth.”