SAINT-QUENTIN-EN-YVELINES, France – Justin Thomas and Jordan Spieth know all too well the power of the final point in a session.

They watched it swing the momentum of the Ryder Cup on Friday.

That’s when Tommy Fleetwood ran in a series of clutch putts to power the Europeans to their lone point in morning fourballs, then he and his teammates not only erased the deficit but took a 5-3 lead after a rare session sweep.

Twenty-four hours later, Thomas and Spieth are hoping their late rally has a similar effect after the U.S. team was nearly shut out.

Thomas birdied the 14th, 16th and 17th holes to escape with a 2-and-1 victory and keep alive the Americans’ slim hopes.

“Obviously things haven’t gone our way these last two sessions,” Thomas said. “Hopefully this match can do what Tommy and Francesco’s did yesterday morning and turn the momentum around.”

The U.S. team better hope so.

The 8-4 deficit after three sessions matched the Americans’ largest-ever deficit on the road.

At one point Saturday morning, the Americans trailed in all four matches, which was even more disastrous considering they were heading into afternoon foursomes, traditionally the format in which they’ve most struggled.

Though his teammates failed to turn around any of their matches, Spieth birdied the eighth to square the match against Ian Poulter and Jon Rahm, then Thomas caught fire coming home.

“We knew how big this point was,” Thomas said. “We’re not even halfway done with the golf tournament yet. So this was a big point, and hopefully we’ll get it turned around.” 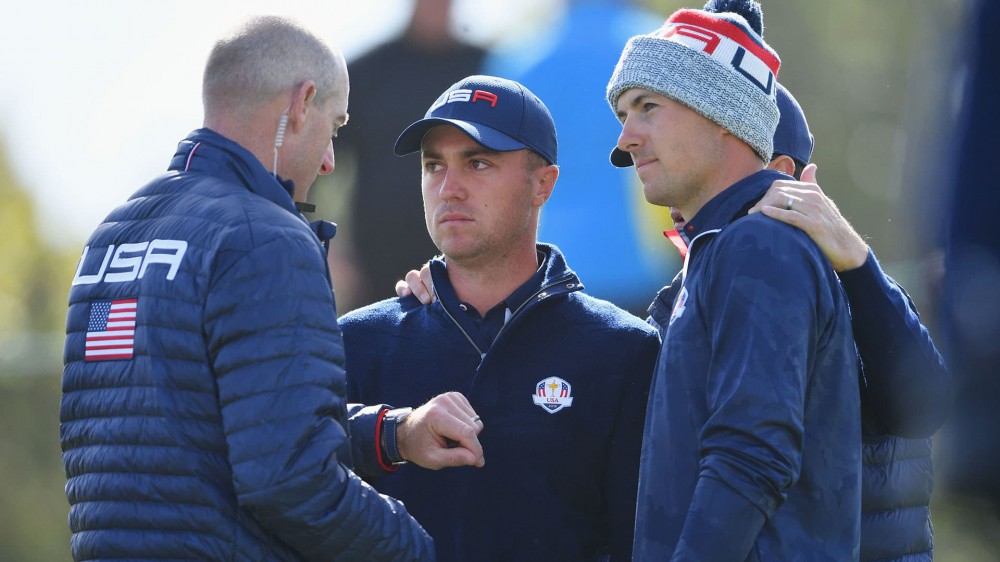