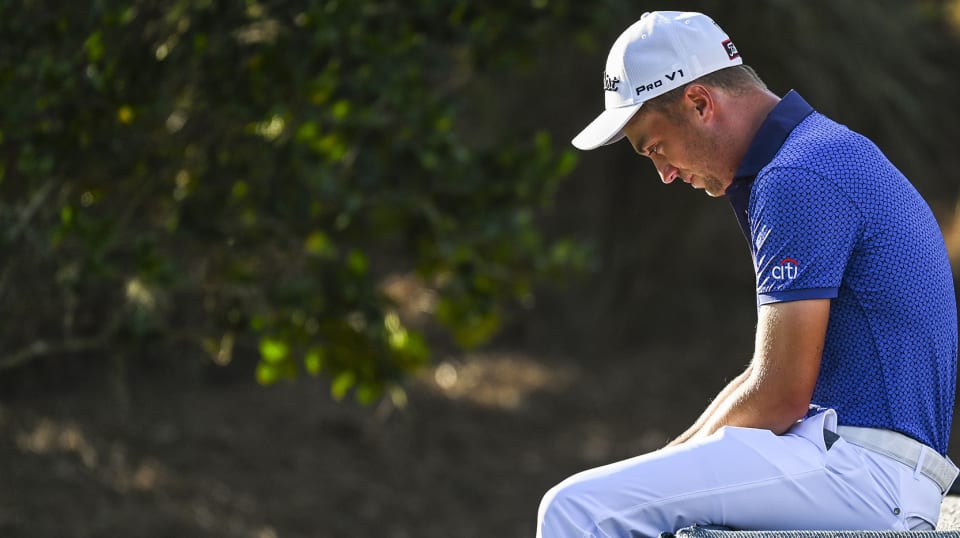 A hot mic in Hawaii picked up Thomas using insensitive language; he was horrified and contrite and vowed to do better. His grandfather, PGA professional Paul Thomas, died at 89; he was gutted but played on. Barely two weeks later, Tiger Woods, Thomas’ friend and Presidents Cup partner, was seriously injured in a one-car accident in Los Angeles.

Thomas struggled to process everything.

“I did a lot of things,” he said after going 5 under from holes 9-12 on the way to a final-round 68 and a one-stroke victory over Lee Westwood (72) before an appreciative but limited crowd at THE PLAYERS Championship at TPC Sawgrass. “I talked to people. I’ve reached out to people.

“I mean, I’m not embarrassed to say that I reached out to talk to people to kind of let my feelings out and just discuss stuff with them,” he continued. “I think it’s something, especially at our level, a lot of people probably think that they’re bigger and better than that, but some of the thoughts and things I was feeling, it wasn’t fair to myself, and I needed to do something, and my girlfriend Jill was very helpful with that and staying on me to make sure I was taking care of myself, like I would want to do for anyone else in my family.”

Here are five stories you may have missed from THE PLAYERS.

With his head in a better place, Thomas weathered a frustrating first eight holes Sunday as he split fairways and pelted greens but battled an uncooperative putter. His towering 5-iron at the par-5 ninth set up a two-putt birdie, and that ignited a torrid run – birdie, birdie, eagle (again reaching the green in two at the 11th), birdie – to seize control.

Thomas went 14 under on the par 5s, the best performance in the ShotLink era (since 1983) at THE PLAYERS. Jimmy Johnson, his caddie, called the 5-iron on nine the most impressive shot of a day full of them. It was “a ball-striking clinic,” he said after his man had hit 17 greens in regulation, missing only the last when his approach stopped on the front collar, inches short.

It was another close call just earlier, Thomas’ final drive stopping mere feet from trickling over the bulkhead, that had him thinking of his late grandfather looking down and keeping him dry.

His 132 (64-68) on the weekend matched a tournament record for low final 36, and he becomes the fourth player to win THE PLAYERS, a major championship, a World Golf Championships event and a FedExCup title, joining Tiger Woods, Henrik Stenson and Rory McIlroy.

2. Westwood left in a good mood.

Lee Westwood, the 54-hole leader, admittedly had only his C game Sunday, but said he was proud of himself for holding it together and making birdie on 18 for a solo second. It was his second straight runner-up finish after the Arnold Palmer Invitational presented by Mastercard.

No, he didn’t win, but as he reminded everyone, it’s just golf. It’s just a game. “It gets treated far too seriously occasionally,” he said. “With what’s going on in the world, it’s fun to be doing a job that I love and that I’ve done for 28 years, and I’m still doing it.”

He and fiancé Helen Storey made for a fun storyline at TPC Sawgrass, just as they have in the U.K. tabloids (Sample headline: “Love Storey.”) That Westwood, who will turn 48 next month, is enjoying a career resurgence owes largely to the influence of Storey, a health-and-fitness instructor whom even Bryson DeChambeau praised as Westwood’s “secret weapon.”

After going from 153 to 22 in the FedExCup the last three weeks, Westwood joked about his age, adding, “It’s just a joy to be involved and still playing well and being able to contend.”

It wasn’t the best day for Bryson DeChambeau, who topped his tee shot 143 yards into a pond at the par-4 fourth hole. After taking a one-stroke penalty he cracked his 4-iron with his next effort and had to scramble from out of the pine straw just to salvage a double bogey.

Still, DeChambeau didn’t give up, grinding out a 71 to finish two back in a tie for third. That kept him at No. 1 in the FedExCup after his fifth top-10 finish in eight starts this season.

“I can play on golf courses that don’t really suit me,” DeChambeau said of his big takeaway from the week. “That’s a big lesson. I’d also say, no matter what happens, no matter if I pop a shot, no matter if I thin, whatever it was, and make a really good double or could have been triple or quad, I’m still never out of it for the most part. I know my game is good enough in most facets to get it back and compete with the best of them.”

Brian Harman’s 69 and T3 finish was his best on TOUR since he finished T3 at the 2019 A Military Tribute at The Greenbrier. Still, the result was somewhat bittersweet.

Having birdied only one of the four par 5s, and bogeyed the third and sixth holes, it was easy to see where he might have made up the two shots that separated him and winner Thomas.

“Just a couple swings I wish I could have back today,” he said. “Just a couple sloppy bogeys on the front, but nice to make a run on the back nine. Yeah, I was trying to make birdies. I was aiming at flags, proud of the way I played 17 and 18, and just came up short.”

Paul Casey’s chances looked grim after he hit two in the water and made a quadruple-bogey 7 at the 17th hole Thursday. Undaunted, he came all the way back and had a chance to win Sunday before signing for a 2-under 70. At 11 under he tied Talor Gooch (67) for fifth, three back.

Corey Conners (66, solo 7th), meanwhile, stayed hot after his third-place finish at the Arnold Palmer Invitational presented by Mastercard. He went 6-under for his first 13 holes to get within two of the lead at TPC Sawgrass on Sunday, made five closing pars, and tied Charles Howell III (T9), Sungjae Im (T17) and Collin Morikawa (T41) for the day’s low round.

“Yeah, I’m doing a lot of things really well,” said Conners, who will play in next week’s World Golf Championships-Dell Technologies Match Play for the first time. “I’d say I’m hitting the ball really solidly, hitting it well off the tee. Ball-striking is usually a strength of mine so that’s really solid right now. Getting some putts to fall, as well, is a nice added bonus.”