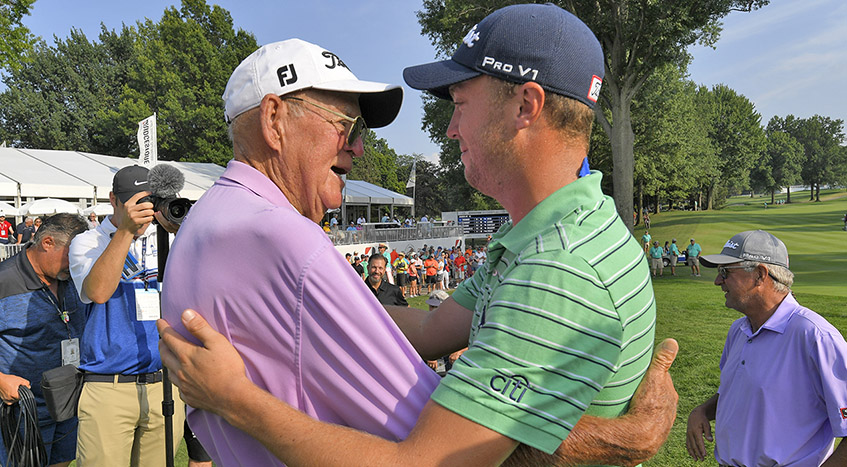 “I wasn’t nowhere near good enough. I was just scraping it together, anyway,” Paul said. “The TOUR was just getting organized. It was nothing like it is today. You’d enter one tournament from the last one.”

Paul served as an assistant pro at several clubs before becoming the head professional at Ohio’s Zanesville Country Club in 1963. He was 31 years old, and already had been a professional for 13 years.

He held the post for more than a quarter-century while remaining one of the top players in the Central Ohio PGA. He played with Arnold Palmer on the PGA TOUR Champions, made the cut in three U.S. Senior Opens and even beat former U.S. Open champion Tommy Bolt in an 18-hole exhibition.

Paul was an old-school instructor – “I don’t believe in theory because no two people are the same,” he said – whose students included two future LPGA Tour winners, Tammie Green and Michele Redman, and Mike Thomas, the second-oldest of his four sons.

Green, whose seven wins included one major, the 1989 du Maurier, lists Paul as the biggest influence on her career. Mike Thomas was a good amateur and an all-Ohio Valley Conference honoree at Morehead State before following his father into the club pro ranks.

Mike, too, enjoyed a lengthy tenure at one club, Harmony Landing Country Club outside of Louisville, and Justin reaped the benefits. The members were supportive of their head pro’s son, allowing him full use of the course and practice facility.

“You could tell when he was 7, 8, 9, 10 years old, he had something. You could tell that there was a big possibility there,” Paul said. “I remember telling him a long time ago that, as well as he drives the ball, don’t spend your time hitting those irons. Get out there and hit the sand wedge and the pitching wedge.”

The Thomas men all have strong short games. The putter was one of the strongest clubs in Paul’s bag. Mike was influenced by his father’s devotion to that aspect of the game, and he enjoyed practicing shots that he could see go in the hole. And Justin followed his father to the chipping green, a constant site of competition between three generations of Thomas men.

Paul won’t take credit for his grandson’s success, though.

“I would say the most help I ever gave him was playing with him and talking to him,” he said. “His dad is his only teacher, and that’s the way it should be.”

Paul’s stories “influenced Justin’s love and passion” for the game, Mike said. Paul’s success as a player helped him teach course management and the art of playing the game.

The older Thomases could be overly technical, though, so Mike tried to keep his instruction of Justin simple, focusing on the fundamentals. And after struggling to meet his father’s high standards, Mike also wanted to ensure his son had fun on the course.

“That was a different era. Those guys truly did dig it out of the dirt.”

Paul was born in 1931 in Ashland, Kentucky, a steel town on the border of West Virginia, but his family moved to Cincinnati when he was 5. Two of his early assistant-pro jobs took him to York, Pennsylvania, and Tequesta, Florida, where he worked for Ohio native and established PGA TOUR winner Dow Finsterwald at Tequesta Golf Club. Tequesta is a short distance from Jupiter, where Justin Thomas and a parade of other PGA TOUR players now live.

In 1958, Paul returned to Cincinnati to work as an assistant pro at Western Hills Country Club. He quickly established himself as one of the state’s top players. He won that year’s Southern Ohio PGA Championship to qualify for the PGA Championship. He never made it to the national championship, though.

There would be other PGA Championship chances earned, however. Paul played at Firestone CC in 1960 and Olympia Fields in ’61, and he also competed in the 1962 U.S. Open at Oakmont.

He missed the 54-hole cut at Firestone but had good company: Hogan, weeks after nearly winning his fifth U.S. Open, also failed to qualify for the final round.

Thomas remained a stalwart in his PGA section, twice winning the Central Ohio PGA Championship. His best success came in his 40s and 50s; he finished T15 in the 1983 U.S. Senior Open and played with Palmer in the final round of the Citizens Union Senior Golf Classic in Lexington, Kentucky. Thomas trailed Palmer by just a stroke entering the final round, but shot a 77 to Palmer’s 67. Those numbers have long since faded. The memory hasn’t.

Paul, 86, still plays a handful of times per week and gives the occasional lesson. He’s shot his age every year since turning 64. And, of course, he watches his grandson succeed in the family trade.

“After he showed that he was going to make it, I told him, ‘Only you can screw this thing up. It’s up to you to make something out of yourself,’” Paul said. “And he sure did.”