HONOLULU – A bet is a bet, and no matter how uncomfortable Kevin Kisner may have been he was going to pay off his debt, although he did want to clarify a few things.

Moments after teeing off on the par-3 17th hole at Waialae Country Club on Thursday, Kisner, a University of Georgia alum and lifelong fan, put on an Alabama football jersey, the payoff for a bet he had with Justin Thomas over Monday’s College Football Playoff National Championship.

“I’m blaming that bogey on him,” laughed Kisner after a poor tee shot at No. 17 led to a dropped shot. “I would have never hit that bad of a shot if I wasn’t thinking about that ‘Bama jersey. No, it’s all in good fun.”

Thomas admitted he’d forgotten about the bet until the duo reached the 16th hole and Kisner reminded him. He was also impressed with how Kisner handled the situation.

“He handled it a lot better than I probably would have if I had to put the jersey on,” Thomas said. “I don’t have the hatred toward Georgia like I do a lot of other schools in the SEC. I don’t know if he feels the same way, if that’s why he handled it as well as he did, or if he’s just that good of a sport.”

Kisner did point out that he pressed Thomas to give him the points for Monday’s game, with Alabama a 3 1/2-point favorite, but couldn’t get him to agree.

“If I’d have got the points, he’d have been wearing it, and I was lobbying for the points the whole week, and he didn’t give them to me,” Kisner joked. “So I’m still not sure about this bet.”

Kisner plans to sign the jersey, along with Thomas, and auction it off with the proceeds going to his foundation. As for next year, both players are hopeful they can renew the bet.

“I’m sure [Kisner] and I would both agree that we would gladly sign right now to have that same exact bet happen next year,” Thomas said. 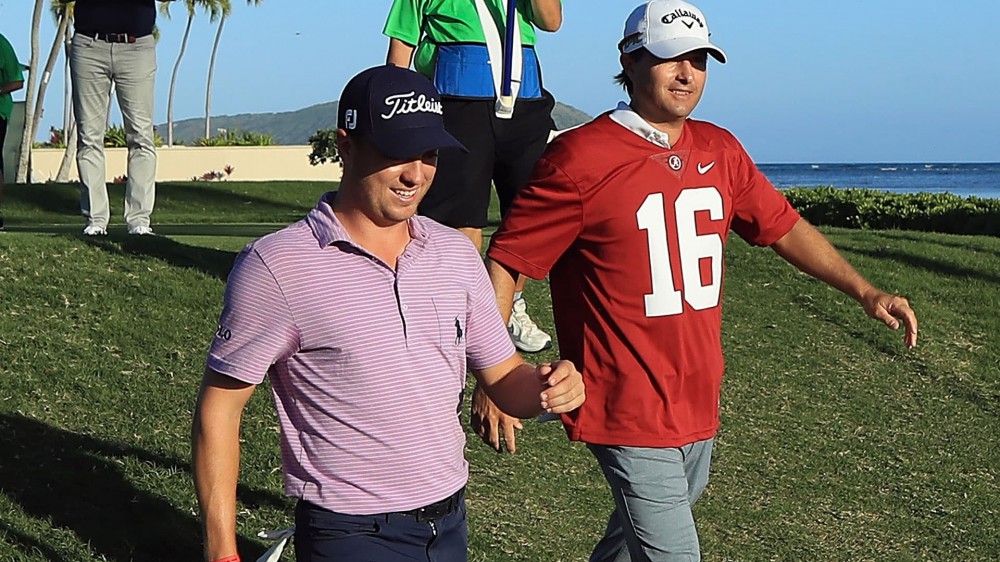