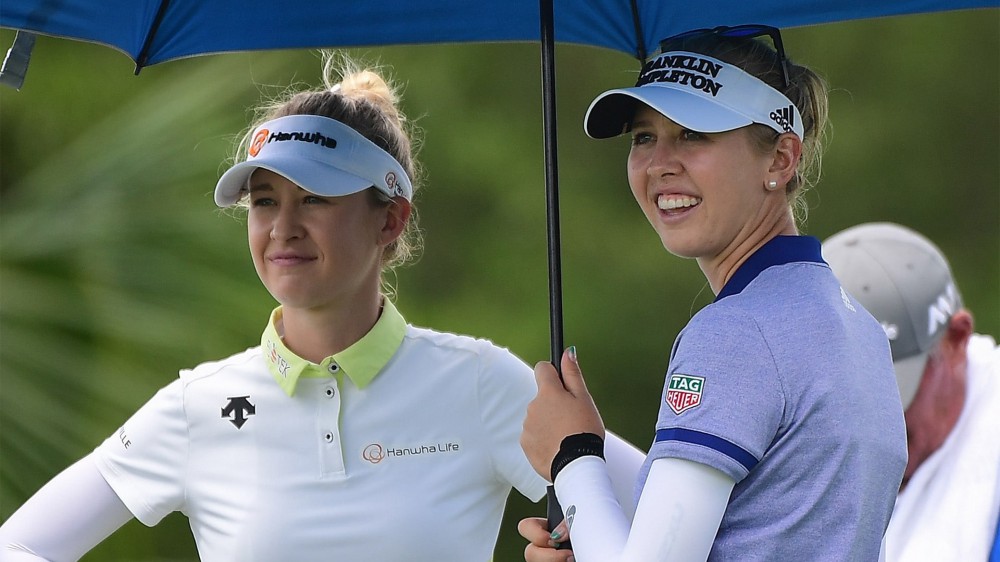 PHOENIX – Nelly Korda has given herself a chance to win her third LPGA title in her last eight starts.

Just 20 years old, she could leave the Bank of Hope Founders Cup as the highest ranked American in the world.

With a 6-under 66 Saturday, Korda moved into a tie for fourth, four shots behind China’s Yu Liu, who is seeking her first LPGA title.

At day’s end, Nelly was almost more excited about her big sister’s spot on the leaderboard. Jessica, in her first start of the year after taking an extended leave to heal a left forearm injury, shot 67 to move into a tie for ninth, six shots off the lead.

“When you see me staring a long time at the leaderboard, I’m looking for the K’s to come up, to see what Jessica is doing,” Nelly said. “I look at leaderboards every tournament, but when Jessica is playing, I look even more.”

Jessica, 26, aggravated her left forearm sometime late last year. She barely practiced for a month leading into the season-ending CME Group Tour Championship and then skipped the first five events this year to rehab and heal. It’s the same forearm injury that caused her to withdraw from the Women’s British Open and the Solheim Cup two years ago. She said there’s a nerve issue involved, but through rehab she has worked to build the muscles around the injury.

“I’m happy to be back,” she said after Saturday’s round. “I’m just grateful for every round I get to play. I’m just happy to be healthy and pain-free, for now.”

Jessica began last season while still dealing with lingering pain in the aftermath of a complex offseason jaw surgery, which alleviated an overbite that was causing severe headaches. She won in Thailand in her first start after returning from the surgery.

“I’m proud of her,” Nelly said. “It’s been tough with the injuries. She’s just really grateful for every tournament she gets to play.”

Jessica is No. 14 in the Rolex Women’s World Rankings. Nelly is No. 8, trailing only Lexi Thompson (No. 7) among Americans. Nelly can move ahead of Thompson Sunday to become the top-ranked American. She needs a sixth-place finish or better to do so, though she could also move ahead of Thompson with a lesser finish, depending on how many players she is tied with.

The Kordas are the third set of sisters to win LPGA titles, joining Annika and Charlotta Sorenstam and Ariya and Moriya Jutanugarn as tour winners. Jessica has won five LPGA titles, Nelly has won two.

Jessica was home resting her forearm when Nelly broke through to win her first title at the Swinging Skirts Taiwan Championship last fall and again when Nelly won her second title at the Women’s Australian Open last month.

“Obviously, I want to be out here playing and competing with Nelly, but just watching her from home, I was so proud,” Jessica said. “She’s playing so great. It’s not just that, though. I’m really proud of the way she carries herself, even the way she talks about her experiences.”