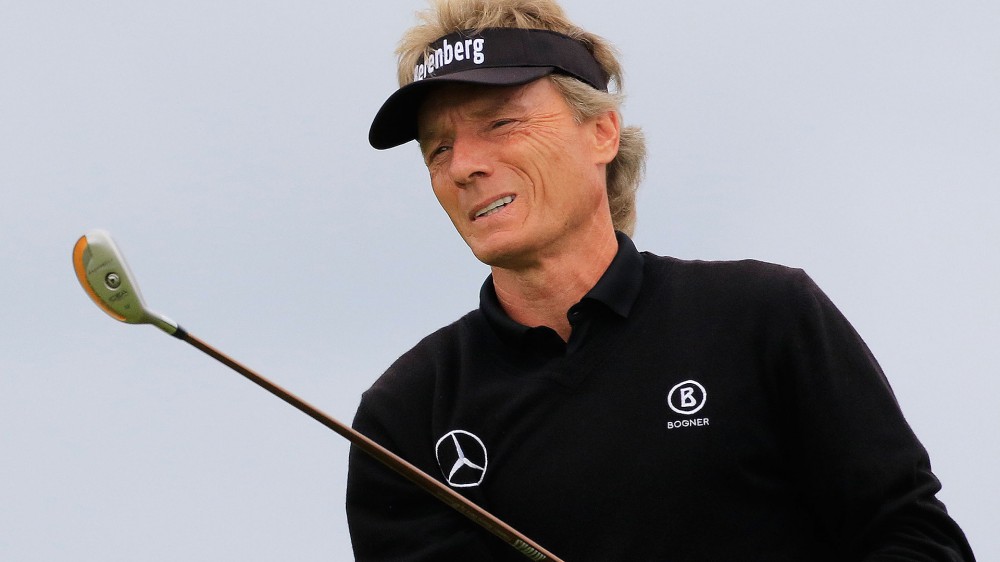 Weather, controversy, the rare off day – none of it seems to bother Bernhard Langer. Like Old Man River, he just keeps rolling along.

On Saturday in moderate wind and rain in Bridgend, Wales, the 59-year-old German shot a 6-under 65 to take a four-shot lead going into the final round of The Senior Open.

Langer is chasing his 10th senior major title – his nine wins are already a record – and given that he has won four of the last nine majors, it would be a shocker if he fails to seal the deal.

He’s already won two majors this year, and the last time this championship was played at Royal Porthcawl, in 2014, he won by 13 – thirteen! – strokes.

In his 10th year on PGA Tour Champions, Langer has won the money title eight times. He’s been the tour’s player of the year six times and the scoring average leader five times.

Earlier this year it appeared that Langer might be stoppable. A longtime user of the long putter, Langer continued to use it even after the ban on anchored strokes went into effect. In July, Golf Channel’s Brandel Chamblee called enforcement of the ban “appalling.” Across social media, many others agreed.

Langer didn’t. Nor did Scott McCarron, another accused anchorer. In conjunction with the USGA, they issued a joint statement claiming their innocence. Langer wrote: “I believe in honesty and integrity, and I could not live with myself if I broke a rule and did not incur the penalty. I’m certain that I am not anchoring the putter and that my putting stroke is not violating the Rules of Golf.” He continued: “On several occasions, I have been in contact with the USGA and rules officials on the PGA Tour and PGA Tour Champions, and each time I have been assured that my putting stroke is within the Rules of Golf.”

The USGA backed up the players, writing: “We are confident that Rule has been applied fairly and consistently and have seen no evidence of a player breaching the Rule, which does not prohibit a hand or club to touch a player’s clothing in making a stroke. Integrity is at the heart of the Rules and how the game is played worldwide, and this essential value has made the game enjoyable for all golfers.”

The USGA’s position was criticized by many – including Chamblee, who wrote that it provided players a loophole. Regardless, the fact is that Langer has been found innocent and is free to continue to bludgeon opponents with his broomstick stroke.

If the controversy bothered Langer – and he later said it was “hurtful” – he didn’t let it affect his game. As he has proven so far at Royal Porthcawl, he’s still head and shoulders above the rest of the senior tour. “I’ve still got to be aggressive,” he said after Saturday’s bogey-free round. ”There’s a lot of guys waiting for me to fall apart or whatever.”