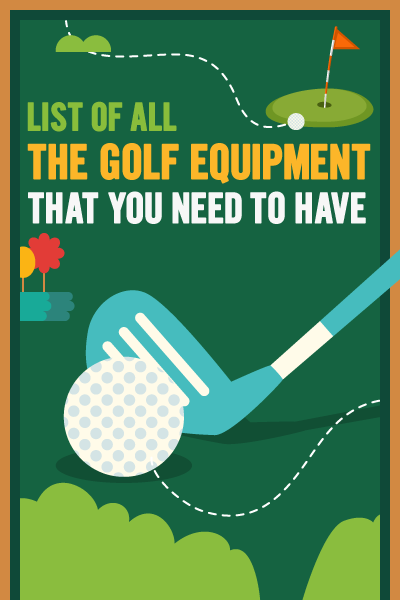 Are you a new golfer? You are finding golf equipment for beginners. Ok, it’s no problems. Read our topic to see full  List of all the Golf Equipment for Beginners and Professional.

If we observe the sports happening in the previous century, then golf has come forth as the widely accepted game. The progress of golf in the USA and other parts of the world has resulted in name and wealth to its participants who were never the case earlier. Professional game of golf was never so accepted and in vogue.

In the present scenario anybody of some standing plays golf. Earlier it was thought to be the game for retired people, but it is not so. People of all age groups play this game for leisure and as a competition. Fifteen of the past Presidents of America were golf players.

Golf is played with a club and ball. The clubs of varying specifications are used in the game. The ball is hit with the club to make it enter the holes spread over the course. The minimum strokes are the contention. This is one game that does not depend on standardized playing region.

The holes vary from 9-18 holes. Every hole has a tee box as well as a putting green with the actual cup. The terms used for the game balling is

Each hole laid out on the course is exclusive with specifications and game plan. The game is based on lowest number of strokes. It is called stroke play. It is the pattern at all levels of the game.

History of the Game

Golf has been the game of the UK right from the 1800s; it was in the second half of the century that the game took roots outside the UK. Even at that time it was not noticed in the USA; in the last decades of the century, golf clocked in the northeastern USA. The whole of the 19th century the game of golf was a struggle in the country. It was first the civil war and later other games like horse riding, boxing that took the lead.

The pioneering golf course was constructed in the USA in 1888 by Scotsman John Reid. His golf clubs came from Tom Morris. He created interest among some of his friends and built a three holes course among cow pastures at Yonkers New York. It was in 1889 Kentucky members laid out a course and names it Middlesboro Club.

As the last decade of the century lead to its conclusion, there were 9 golf courses in the whole of the USA. In the east course, the first 18 hole course was in Chicago. It was the pivotal location. As the century concluded, the number of golf courses had gone up to 26.

It is clear that golf gained popularity in the USA. There was demand for an organized body to conduct the game. In 1894 the golf clubs that held an important meeting was:

These organizations of the golfers created Amateur Golf Association in the USA. Theodore Havemeyer belonging to the Newport club was appointed the first President. Thus began a new phase of the game where competitions’ were held. The first in the list was National Open and Amateur Championships. The first prize was booty of $150 comparatively above the British open in the same year.

The pair of things that a golfer requires for the game of golf is:

All golfers carry assorted golf clubs each with a specific function and varied shots. The golfer makes a selection from a band of heterogeneous clubs. The clubs are aimed to hit the ball with deviating distances or put the ball in air through a befitting stroke. The set of the golf paraphernalia has several varying club and the ball position decides which one is to be used.

In standard golfers, the kit is 14 golf clubs. Most of them are serially placed. The number is the identification of the angle of the club. It is also called loft. The lower the serial of the club the angle is the lower rung. Thus, for instance, the number 1 iron will be with diminished angle permitting the ball to move towards the lessened trajectory; the 9 numbered iron will have sufficient loft it is meant for hitting the ball in the air.

Types in the Golf Game

The conventional golf club includes the woods; it has a huge head at times carved out of wood. It is put to use for long shots. It has reduced mastery and with iron comparatively difficult to hit. However once it hits the ball progresses further. These are also numbered, and the lowest ones are labeled driver.

Iron clubs has extra flat top carved out of metal. These have more exactness. The player determines the balls:

These are also numbered but come with a nomenclature such as Sand Wedge, wedge, etc. these types are used in almost all locations shots; assist in the rough section or else when coming closer to green.

Putters have a flat faced and is meant to give a roll to the ball. These are put to use in the greens. At the fringe intersection, they roll the ball towards the green. Aimed putting helps to get a score in the game. The classification of putting is not crucial to the game, but the skill of the player is the deciding factor for the game.

A golfer requires a bag to transport the golf equipment. These includes:

Tees are needed when teeing off the lift of the ball and strike a clearer shot. The shoes underneath of the golfer have spikes for ground grip and balance. The glove is part of the equipment. It is worn on the left hand. A towel is carried for cleaning equipment like the ball. Some carry umbrellas.

The first trio great golfers were:

By an amazing coincident the first three were born in 1912. The others also made their mark in professional golf and the Americans fans remember them fondly.

The world Golf Hall of Fame is situated at World Golf village close to St Augustine in Florida in the USA. It has honored men and women golfers through their work. The place is backed by a consortium of 26 golf organization globally. The entry in the hall of fame is based on professionalism and accomplishment of the player. Others linked through the game and included in the league are:

They are not players but contributors.

Every year new players and fans are joining the game show. They are not well informed on several issues of the game of its history. They may have many doubts and queries. Write to us and we will be happy to reply back. We will clarify many of your stands. A fan has a right to know about the achievement of the golfer or the rules of the game. Sharing with us will make you wiser.

Our customer care department is very interactive and prompt. We are well informed about the game and will share the same with you. Do write to us!