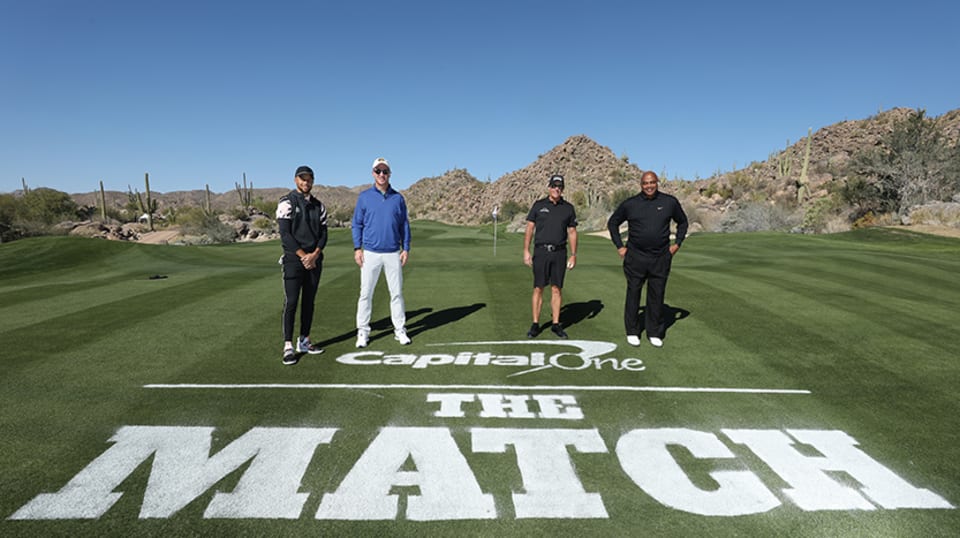 RELATED: How to watch

The event will contribute toward and highlight diversity, equality, and inclusion through donations to Historically Black Colleges and Universities (HBCUs) and organizations that support them (Thurgood Marshall Fund, United Negro College Fund) while raising awareness and spotlighting opportunities for diversity and equality in sports.

As many of us lay back in a food coma following Thanksgiving feasts it’s also important to note the match will support Feeding America. Around 50 million people may face hunger in the U.S. during 2020’s pandemic times, including more than 17 million children.

The competition format will be modified alternate shot match play where each player will hit a tee shot and the team can then choose their best option before continuing in alternate shot fashion until the ball is holed.

The smack talk has already begun with Manning handing Barkley a special kit that includes an airhorn he can blow if he gets lost in the desert. Clearly these four champions are out for some fun while raising money and awareness for great causes. Mickelson has his calves out in all their glory – and he’ll likely need them to carry a pretty big load given what we’ve seen out of Barkley in the past.

But the 44-time PGA TOUR winner is at least talking a confident game – while reminding us he’ll be hitting bombs and hellacious seeds to put some pressure on the Curry/Manning combo. And hey, look at this, Barkley has actually made some decent contact on a few at the range. Could an upset be on the cards?

Just minutes away from the start of The Match and players are getting their final warm up moments in. Mickelson is dialed in on the putting green while Barkley is trying to stretch out his back before he submits it to his swing that usually resembles a frog in a blender. Curry and Manning have that look of quiet confidence but there’s also a whiff of nerves coming from the duo who, at their best in their respective sports, were seemingly impervious to jitters. The anticipation for the smack talk battle is just as high as it is for the golf itself.