PHOENIX – LPGA leaders want you to see the bigger picture of what they believe the tour is all about.

They want you to see that the obstacles their players have overcome in building the oldest women’s sports organization are examples that inspire beyond sport.

They’re celebrating more than athletic performance in “Drive On,” the tour’s new brand campaign launched Wednesday at the Bank of Hope Founders Cup.

This is for every girl. #DriveOn

With the campaign’s first 45-second advertisement, they began selling the message of diversity, inclusion and women’s empowerment that they believe has been part of the tour’s story since its inception in 1950.

“These things have been part of our DNA for 70 years,” LPGA commissioner Mike Whan said in an introductory video shown to media at Marriott Resort’s Wildfire Golf Club. “We are a living, breathing example of these important topics.”

LPGA pros Brooke Henderson, So Yeon Ryu, Anna Nordqvist, Lizette Salas and Mo Martin are in that first spot, which is designed to set up a series of stories to follow, all about persevering and overcoming.

“This is for every girl who has ever been laughed at or told she doesn’t belong,” Henderson says.

“This is for every girl who has ever been told she’s too loud, too quiet, too this or too that,” Salas says.

The ad goes on with similar themes.

LPGA Hall of Famer Nancy Lopez wiped away tears watching, saying the campaign captured a message the tour has struggled to properly tell until now.

Stacy Lewis, who will be featured in a future spot, believes the campaign will help grow the LPGA’s following.

“I think if somebody that’s a dancer can find inspiration in a golfer, we’ve found a new fan,” Lewis said. “That’s what I see in the campaign, is pulling more fans in from other areas.”

“Throughout my career I’ve talked about purses and elevating the game and elevating women,” said Lewis, one of the tour’s newest moms. “It’s pretty fitting that I would have a daughter.

“My hope is that she never has to come up here and talk about not making the same amount of money as guys. That’s what drives me every day, is to make it better for her, whether it’s golf, or whatever she’s doing in the workplace, getting a job that she’s making the same amount of money as a male counterpart. That’s what I’m out here doing every day.”

Whan said that in the 15 women’s leadership summits or seminars that are staged at tour events during the year, he realized title sponsors were seeing the value of the LPGA beyond what he and any of his players realized.

“For many of our partners, investing in the LPGA has become much more than sports sponsorship,” said Roberta Bowman, the LPGA’s chief brand and communications officer and a former Duke Energy executive. “To our partners, the LPGA has come to represent the positive, visible, authentic example of diversity, leadership and opportunity for women.” Amy Bockerstette, a 20-year-old golfer with Down syndrome, got to play the iconic 16th hole at the Waste Management Phoenix Open and made par with Gary Woodland watching.

Amy Bockerstette, the Special Olympics golfer whose effort making par went viral at TPC Scottsdale’s 16th hole during the Waste Management Phoenix Open pro-am this year, was a special guest introduced in Wednesday’s launch. So was Pratima Sherpa, the 19-year-old amateur from Nepal, who grew up with her parents living in a maintenance shed at Royal Nepal Golf Club. She’s playing her first professional event next week at the Symetra Tour’s IOA Championship in Beaumont, Calif.

Bowman said she believes the “Drive On” campaign will widen the LPGA’s appeal.

“I think this starts to change the conversation and perceptions of the LPGA,” she said. “And I think it brings more potential fans, sponsors and players to the game.” 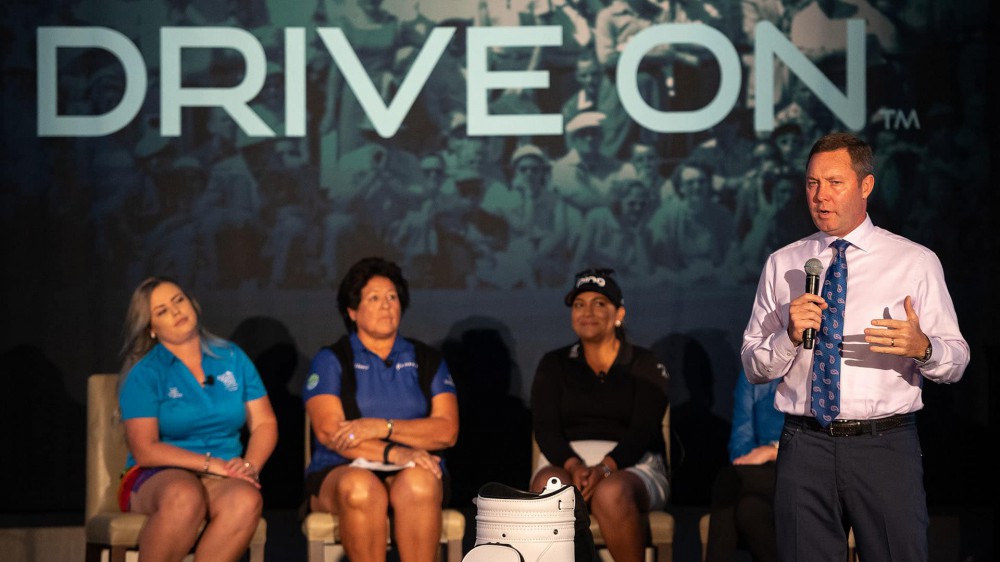