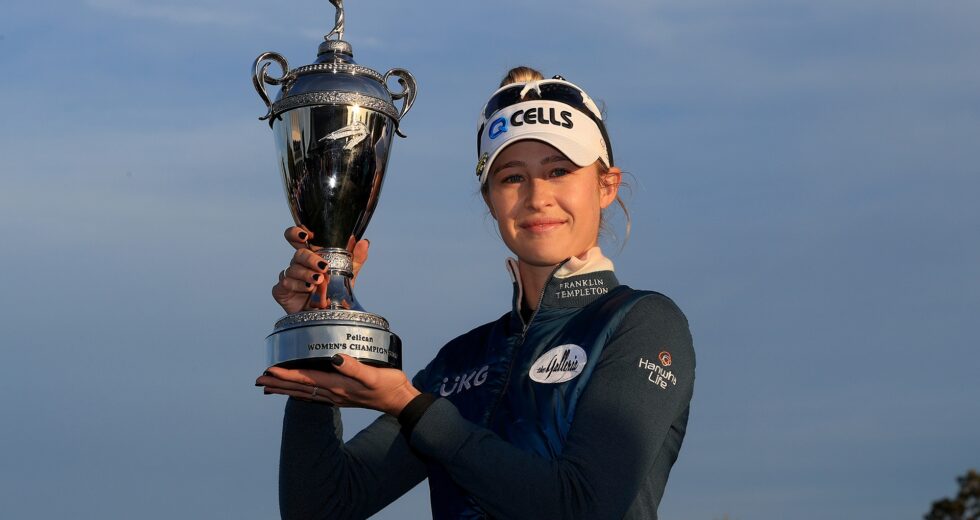 NAPLES, Fla. – As its 2021 campaign winds down at Tiburon Golf Club, the LPGA announced its 2022 competition schedule on Friday.

On the docket are 34 official events as the tour visits 12 U.S. states and nine other countries, including Canada, China, Japan and Taiwan, four countries that the LPGA did not visit the past two seasons because of the COVID-19 pandemic.

There is more money at stake, too. Next season’s purses comprise a record high for the tour, with $85.7 million up for grabs. That number is up from this season’s adjusted purse total of $67.5 million. Nine tournaments have announced purse bumps, including the Chevron Championship ($5 million, up $1.9 million), AIG Women’s Open ($6.8 million, up $1.3 million) and season-ending CME Group Tour Championship ($7 million, up $2 million).

“The stage is set for 2022 to be one of the most exciting years in the history of the LPGA Tour, with the addition of new events, the largest total purse ever, over 500 hours of broadcast television and a collective commitment to being the leading women’s professional sports property in the world,” said LPGA commissioner Mollie Marcoux Samaan.

The total purse could increase, as well, with additional purse increases expected to be announced. The U.S. Women’s Open, which awarded $5.5 million this season, has yet to unveil the purse for its 2022 championship at Pine Needles, which will host for the first time since 2007.

Three-time U.S. Open venue Congressional Country Club will host its first women’s major, the KPMG Women’s PGA Championship, while Muirfield, which didn’t admit female members until 2019, hosts an historic AIG Women’s Open in early August. On the other hand, longtime LPGA host Mission Hills Country Club will close the door on its relationship with the Chevron Championship (formerly the ANA Inspiration), which moves to the Houston area in 2023.

The rest of the schedule is highlighted by several notable “swings.” The year kicks off in January with three straight events in Florida. After two Asian events, the tour then heads to the West Coast. Four of the next five events, including the Chevron, will be played in California, with Hawaii hosting the other tournament. One of the California events is new to the calendar: the JTBC Championship at Palos Verdes Golf Club near Los Angeles.

Later in the year, the Evian will kick off a run of four straight European tournaments, including two in Scotland. That’s followed by the return of the CP Women’s Open in Ottawa, Ontario the last week of August, and two Ohio-based events, including a new tournament in Cincinnati, the Kroger Queen City Championship, which marks the first LPGA event in that city since 1989.

As of now, there is a four-event Asian Swing beginning in October. Of those tournaments, only the BMW Ladies Championship in South Korea was played this season.

“I’m just very thankful for all the sponsors putting up more money and our purses getting bigger,” Danielle Kang said. “Players are getting better. It’s just LPGA is growing in the right direction. It takes a village to help; we can’t just do it alone. … Our new commissioner, Mollie, has an amazing vision, and I’ve really appreciated the time that she’s taken to talk to me personally, et cetera. I’m really excited for where the LPGA is headed. I’ve been on tour for over 10 years now, so how far it’s come in the last 10 is pretty incredible … it’s getting bigger and better.”

There are a few TBDs, notably optional dates (Feb. 4-6 or Feb. 11-13) for the third Florida event, which needs a title sponsor and host course. The Lotte Championship in Hawaii in mid-April needs a course, as do the Cognizant Founders Cup in New Jersey in May, the Portland Classic in Oregon in September, and the BMW Ladies.

Missing from the schedule is the International Crown, a team event created in 2014 but that was canceled last year because of the pandemic. The LPGA told Golf Digest earlier this year that the tournament had lost its sponsor, UL, and would be canceled again in 2022, though the tour remained “dedicated to keeping this opportunity alive for our world-class athletes to represent their countries on the international stage.”

Here is a look at the complete 2022 LPGA schedule: