KAPALUA, Hawaii – Justin Thomas continued his title defense at the Sentry Tournament of Champions with a new but familiar caddie on Saturday, his dad Mike. And next week, we’ll all see another new but familiar face on Thomas’ bag, Jim “Bones” Mackay.

Following an injury to caddie Jimmy Johnson, Thomas will work with Mackay at the Sony Open, where he will also be defending his title.

Mackay, who is in Hawaii working as an analyst for Golf Channel, caddied for Phil Mickelson until the duo split last year after 25 seasons together.

“I think the world of Justin and I’m looking forward to working with him,” Mackay told Golf Channel’s Todd Lewis.

Johnson had to be replaced for the third round by Thomas’ father, Mike. Johnson injured his right foot (plantar fasciitis) in October at the CIMB Classic and had spent the last few weeks in a walking boot. After two trips around the Plantation Course, considered the most demanding walk on the PGA Tour, it was clear he couldn’t continue. It should take about a month for Johnson to heal.

“Obviously this isn’t a great place to walk when you’ve been in a boot for a while,” Thomas said. “He thought he could go and he went the first two days and he was just a little slower walking. I told him, ‘Look I’d rather you take as much time as you need to get it better and make sure that you’re fresh come L.A., Match Play, Masters, whatever it is, I want him to be 100 percent again.”

The plan is for Mackay to work for Thomas at the Sony Open, and Thomas said he’s still considering who will step in until Johnson is healthy enough to return.

Thomas began his week with rounds of 71-75 and started the third round 10 strokes off the lead before struggling on Saturday to a 2-over 75.

Mike Thomas, who last caddied for his son at the 2016 QBE Shootout, will caddie for Justin on Sunday. 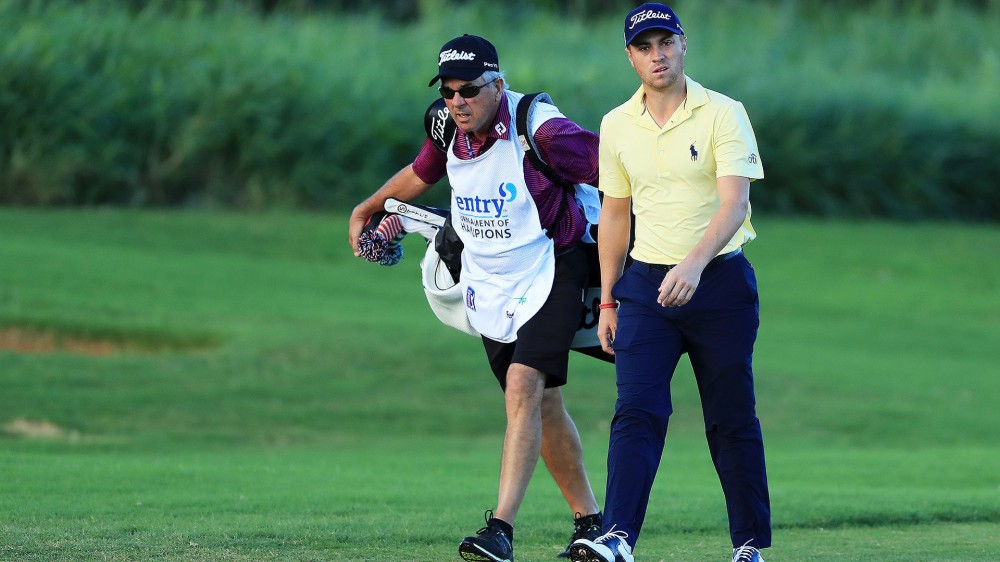