by Michael
in Approach Shots
0

Nothing about Ian Poulter's statistical profile says he should be a Ryder Cup hero, 17-time winner or occupant on the first page of the Masters leaderboard after two rounds.

But the 43-year-old followed his first-round 68 with a 71 to sit two shots behind the leaders, and he did it with a swing that not only doesn't resemble the nuclear-powered ones of players like Dustin Johnson and Brooks Koepka, but also doesn't produce anywhere near the ball speed. His 294-yard driving average through two rounds was 53rd out of 87 competitors.

Where Poulter excels is getting the most out of his good ball-striking weeks and making clutch putts. He's fifth in the field in greens in regulation, and has made only three bogies over two days, which is third best. Top Illinois teacher Rick Silva says it's because Poulter understands the major factor in his own swing that makes the ball curve.

"One of the hidden gems in Poulter’s arsenal is his ability to pull linearly with the shaft of the club almost as if he’s trying to pull a wet grip right off the shaft," says Silva, who operates the Movement 3 Golf studio outside of Chicago. "This lets him apply torque pretty much when and where he wants in the downswing—a strong advantage for controlling the ball."

To feel what this means in your own swing, make a backswing and go into a full speed downswing until you get to where the club is parallel to the ground. Stop there and then start again by pull the club straight toward your belly while curving the handle upward in Poulter's rip-the-grip-in-half move.

"You'll notice the clubhead will start kicking out toward the ball," says Silva, who works with Nate Lashley on the PGA Tour. "This is the opposite of what a lot of weekend players do. They'll push the middle of the handle toward the target. When you push the club this way—whether it's down by the ball or anywhere else—this 'force across the shaft' will take away your ability to torque the club at the right time and in the right way, and your body will have to respond with some strange (and sometimes painful) moves to compensate."

Because this and other "soft" skills like clutch putting don't necessarily jump off the stat sheet, Poulter is consistently discounted as a threat at a non-Ryder Cup event—a fact he's very willing to use as a motivational chip on his shoulder.

"I've got a three percent chance according to everyone else," he said with a smirk, referring to a television graphic that listed his long-shot odds. "I'm happy, I'm confident…I mean I'm as confident as I'm ever going to be with someone who is got a three percent chance. I feel comfortable, I feel I'm hitting it well, I like the golf course, I know a lot about the course for certain pins. I'm just trying to be smart and not take myself out of the tournament, which I've done in the past." 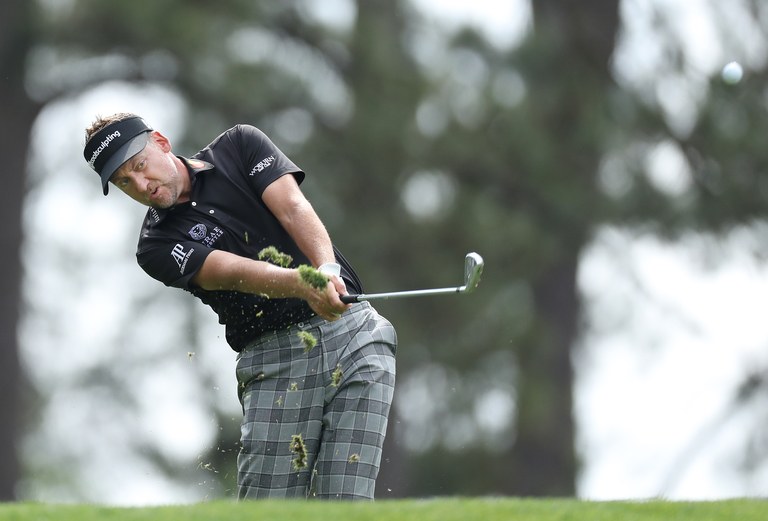 David CannonAUGUSTA, GEORGIA – APRIL 12: Ian Poulter of England plays his shot from the fourth tee during the second round of the Masters at Augusta National Golf Club on April 12, 2019 in Augusta, Georgia. (Photo by David Cannon/Getty Images)