by Daniel Troy
in Driving Tips
0

AUGUSTA, Ga. — Yes, you've already heard about Augusta member Jeff Knox, the decorated amateur who holds the course record of 61 from the member tees and gets the call to play as a marker when the field goes to an odd number after the cut.

But what exactly makes the 56-year-old charitable foundation executive such a good player? It goes without saying that anybody who can shoot 61 from any tees at Augusta National has a wonderful short game—and every tour player who has gone around with Knox has confirmed he's the best at navigating the greens here they've ever seen. But it's his simple, repeatable swing that makes him such a valuable marker. He almost always hits it where he's looking—so he can do his thing at the speed his playing partner prefers.

"When you bake out the differences between tour players because of their different body types and flexibility levels, virtually all of them still do some common things that explain why they hit the ball so well and so consistently," says Golf Digest 50 Best Teacher Michael Jacobs. "Jeff Knox does a lot of the same things. He has what I would call a great 'vanilla' tour swing. It's a terrific model for anybody to use as a starting point for their swing."

The reason tour players look so fluid is because they aren't doing a lot of re-routing of the club. "Knox's left arm comes up during his backswing and goes directly across his right shoulder, and when he makes his downswing, the club never gets pushed or forced too much behind him or in front of him," says Jacobs, who is based at Rock Hill Country Club in Manorville, New York. "When you see better players come down with the clubhead way behind them, they have to contort their body in strange ways to get to the ball. And weekend players usually have the opposite problem—they push the club way out and over the top so that it comes down steep and cuts across the ball."

Knox's clean and efficient move is why he's been able to keep up on a 7,500-yard course well into his 50s—and shoot an unofficial 74 that would have beat or tied ten official competitors who teed it up Saturday.

"Like I said, players have different bodies and levels of flexibility, so you don't want to try to copy exactly what somebody else's move is," says Jacobs. "But you can definitely train a better hand path like the one Jeff has by simply paying more attention to how much it goes behind you or in front of you on the downswing. Get that part more 'neutral' and your pattern of misses will get much more narrow." 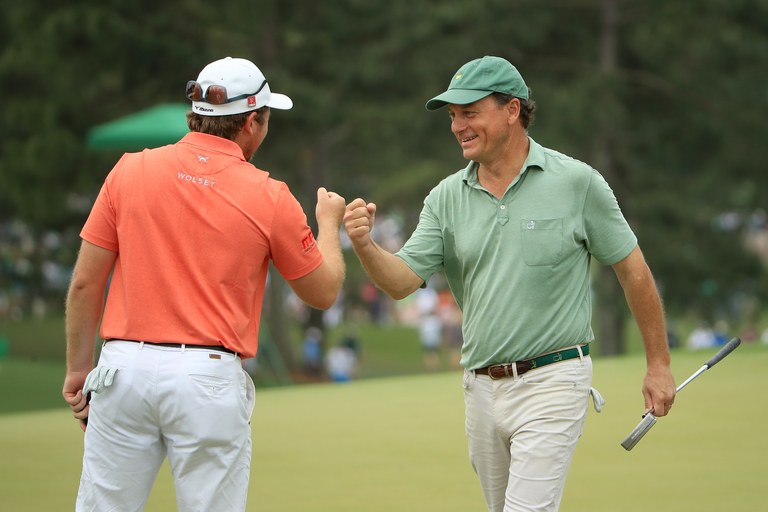 Andrew RedingtonAUGUSTA, GEORGIA – APRIL 13: Eddie Pepperell of England fist bumps marker Jeff Knox on the 18th green during the third round of the Masters at Augusta National Golf Club on April 13, 2019 in Augusta, Georgia. (Photo by Andrew Redington/Getty Images)

The year of the ‘short’ hitter